How to Suffer a Good Life

“You could not be born at a better period than the present, when we have lost everything.”
― Simone Weil, Gravity and Grace

“To make use … of the sufferings that chance inflicts upon us,” said the French philosopher Simone Weil, “is better than inflicting discipline upon oneself.”

In today’s episode, with the help of our friends at Classical Wisdom, we turn once again to another timeless question…

It’s a good time as ever to be asking.

2020, after all, is doling out no shortage of suffering in shadow-filled forms of fear and uncertainty.

Before we get to our “question of the day,” however, to provide some ground floor to this discussion, here’s a little bit more about Simone Weil.

Ironically, Weil wrote the aforementioned quote shortly before inflicting the most extreme levels of discipline upon herself and, at the age of 34, starving herself to death.

It happened while she was working as a volunteer for the Free French Forces in London — a ragtag decentralized army led by General Charles de Gaulle — up against the Axis powers.

By all accounts, it appeared she was intent on dying in the war.

Though she had striking, classically Jewish features, she asked to be sent behind enemy lines as a “covert operator.”

For obvious reasons, she was denied.

She then submitted a plan to General de Gaulle for a corps of front-line nurses (herself included) to be parachuted, unarmed, into the battlegrounds to treat the wounded.

Upon hearing of the plan, he shouted “elle est fou!” — she is crazy!

Once she heard that men on the frontlines were starving, she, in solidarity, restricted herself to what was believed to be their daily rations of food.

Thus, she eventually got what she seemed to want.

During the summer of 1943, while still on her hunger strike, she contracted tuberculosis and, by malnourishment, died.

The physician declared her death a suicide.

Of course, Weil took it too far.

And her actions stood in direct contradiction to what she had seemed to previously believe… which was to avoid suffering whenever possible, but never shrink from it when it can’t be avoided.

An atheist-Marxist who became a Christian mystic (though no Christians who know of her will claim her), she was a walking, breathing box of contradictions.

For that reason alone, however, she was able to philosophize with a sledgehammer.

[Sidenote: In her book Liberty and Oppression, she wrote the most scathing and lucid critique of Marxism ever printed. In one passage, she said: “Marx fell back into the ‘group morality’ which revolted him to the point of hating society. Like the feudal magnates of old, like the business men of his own day, he had built for himself a morality which placed above good and evil the activity of professional revolutionaries; the mechanism for producing paradise.’ Marx’s ‘moral failing was that he did not seek the source of the good in the place where it dwells.’”]

She recognized that to live in contradiction is the only way to live by conviction.

In order to be authentic, in other words, you must face all of life’s endless ambiguities… that messy field of gray… and bear the cross of its many paradoxical opposites.

One of those paradoxes she seemed to hold dear is that suffering is essential to live a good life.

Weil approved of the Nietzschean idea that “what doesn’t kill me makes me stronger,” especially when Nietzsche expressed it in a way which appealed to her radical sensibilities:

“Examine the lives of the best and most fruitful people and peoples and ask yourselves whether a tree that is supposed to grow to a proud height can dispense with bad weather and storms; whether misfortune and external resistance, some kinds of hatred, jealousy, stubbornness, mistrust, hardness, avarice, and violence do not belong among the favorable conditions without which any great growth even of virtue is scarcely possible.”

Fulfillment, Nietzsche and Weil both believed, could not be reached by avoiding suffering…

But by recognizing its role as a natural, inevitable stepping stone on the way to anything worthy.

It’s an idea, by the way, C.S. Lewis also held close to his chest:

“Try to exclude the possibility of suffering which the order of nature and the existence of free wills involve, and you find that you have excluded life itself.”

All three philosophers, sledgehammers in tow, have the ability, if you let them, to completely devastate your sense of self.

(Sometimes even for the better!)

They answer questions you’d never think to ask about things you thought you knew pretty well.

But they didn’t pluck their golden ideas out of the ether.

New, as it has been said, is the well-forgotten old.

It’s by no coincidence they were all fans of the Classics.

Who doesn’t, after all, hear more than an unmistakable tinge of the Stoics when Weil penned this in her journal:

“We should seek neither to escape suffering nor to suffer less, but to remain untainted by suffering.”

Rather than beating around the bush, and getting your wisdom second-hand, it’s often much more efficient just to go straight to the source…

Which is precisely why we’ve teamed up with Classical Wisdom to bring to you what Bill Bonner, one of the wisest men alive (and I’m far from the only one who feels this way), has called,

“The most important book you’ll ever read.”

Get your sledgehammer ready, bucko.

And pound this link to read Bill Bonner’s personal letter about the book… and claim a copy of your own.

Do We NEED Pain? Is Suffering Essential for Understanding?

‘Gain a child, lose a tooth’

After childbirth, obviously, and a few bad stints of food poisoning in Thailand… and Mexico… and northern Brazil, it was definitely the next most painful experience in my life.

An enameled sacrifice for contributing to the human race.

Maybe Aristotle could count teeth after all…

The procedure was brutal – saws, pliers and heavy metal objects were employed.

The dentist was woefully stingy with the anesthesia (from the Greek word “without sensation”.)

This, however, gave your editor ample time to contemplate the deeper things in life, albeit punctuated by bouts of screaming.

Moments like these give us small glimpses into the, no doubt, pain filled past.

Then I started to conjure up the Stoics. After all, they were experts at handling difficult situations.

In the words of the Roman Emperor Marcus Aurelius, as found in his diary, “Meditations”:

“For times when you feel pain: See that it doesn’t disgrace you, or degrade your intelligence—doesn’t keep it from acting rationally or unselfishly. And in most cases what Epicurus said should help: that pain is neither unbearable nor unending, as long as you keep in mind its limits and don’t magnify them in your imagination. And keep in mind too that pain often comes in disguise— as drowsiness, fever, loss of appetite. . . . When you’re bothered by things like that, remind yourself: “I’m giving into pain.”

Of course, Marcus Aurelius was very familiar with pain. His physical frailty was notorious, and of great concern to his subjects. We know that Marcus suffered from chronic chest and stomach pains, problems sleeping, and poor appetite, among other symptoms. Around 174-175 AD, in fact, he was in such poor health that false rumors that he was dying, or already dead, actually spread throughout the empire.

But Marcus Aurelius wasn’t the only Stoic to suffer.

Zeno of Citium, the founder of the Stoic Philosophy, survived a difficult shipwreck and loss of wealth.

Epictetus spent his childhood as a lame slave, perhaps crippled by his very master. 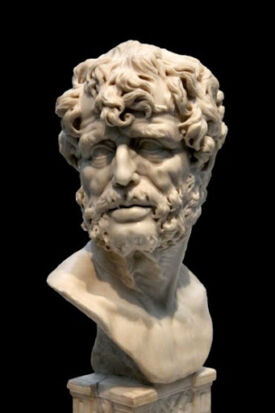 And yet these pains did not stop them. In fact, they may have done the exact opposite.

In our modern life we try to spend all of it pain free. We take pills for the smallest inconveniences, we trade our hard earned resources for every comfort, and all procedures are preceded by all the expected numbing agents (except by a certain sadist Argentine dentist).

But what if the pain is good? Maybe Eve’s curse is a path to greater understanding and wisdom? Men drawn to the battlefield to access previously inexperienced revelations?

Essentially, do we NEED pain? Is suffering essential for understanding?

[Ed. note: For answers, we turn to those who already asked — and answered in a variety of ways — the same questions long ago. Click here for your special offer on The Essential Classics, the book Bill Bonner, our Founder-in-Chief, calls, “The most important book you’ll ever read.”]