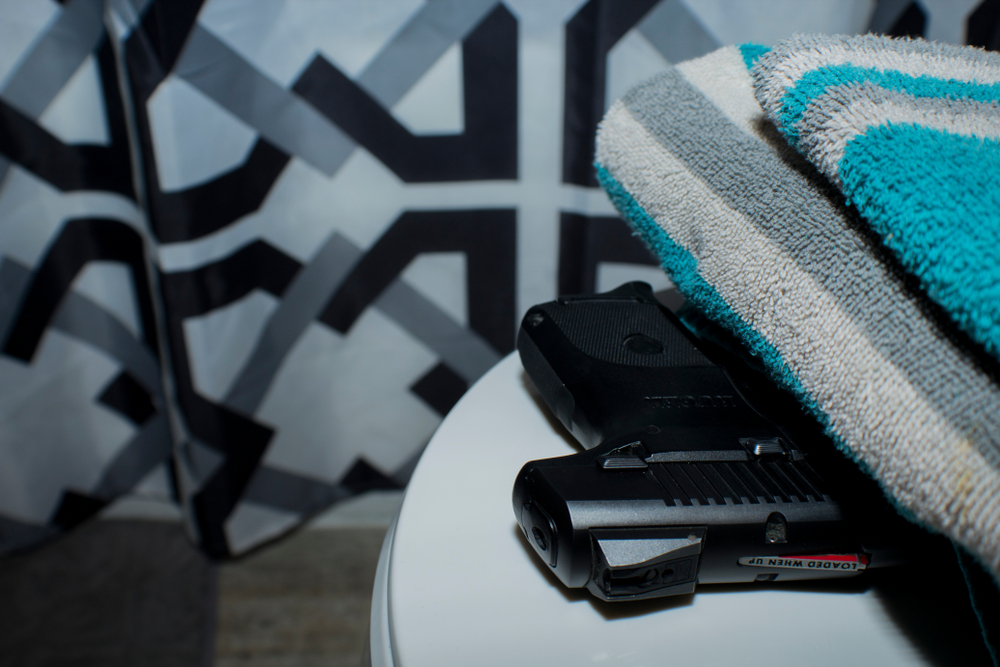 It was 10:45 in the morning when the gunman kicked in the door and caught 90-year-old Jay Leone by surprise alone in his home.

With his finger on the trigger, the 30-year-old convicted felon forced the elderly retiree down to the floor and told him not to move.

With no alarm sounding and no help on the way, Jay feared for his life… However, he had one trick up his sleeve.

It was risky, but it might be his only chance to turn the tables on the armed gunman and escape with his life.

As Jay lay there helpless while the gunman scoured his home for valuables, he managed to convince the home invader to let him use the bathroom to relieve himself.

What the violent felon didn’t know was that Jay — a retired sheriff’s deputy — had his .357 revolver hidden in the bathroom “just in case.”

Once inside the bathroom, Jay grabbed his gun and quickly charged back into the living room to fight back.

The shocked gunman instantly fired his weapon, hitting Jay in the cheek.

Jay’s response? In his own words…

But it wasn’t enough to stop his attacker. The two men wrestled to the floor before the home invader jumped up and ran away. He was later picked up and charged with burglary and attempted murder.

Jay was badly bruised, beaten and bleeding from the gunshot wound to his face — but he was alive. And his terrifying ordeal offers some valuable lessons I want you to consider for your own home defense plan.

1. The Best Place to “Hide” Your Firearm for Home Defense

I’ve said this a bazillion times…

The best place to hide your gun to defeat a home invader isn’t in a safe or your bedside table.

(It’s also NOT in the bathroom, but more on this in a minute…)

Home invaders strike with no warning, and you likely won’t have time to run and get your firearm to defend yourself.

No. The best place to “hide” your firearm is on your person — concealed and ready for action at a moment’s notice.

Remember, you’re legally allowed to carry your firearm in your own home even if you don’t have a concealed carry permit — and you should!

Maybe you got disarmed right away.

Maybe you got knocked unconscious and tied up.

Your home defense plan shouldn’t take a “best-case scenario” approach. You need to seriously consider the “what ifs” you may face.

Jay staged a backup weapon in a place a burglar wouldn’t expect a weapon to be, making it possible for him to get to it and counterattack.

I know some of you have small children or grandchildren, so don’t think “gun” for all your backups…

Look, home invaders are unlike any other type of criminal.

While most burglars pillage your home while you’re away, home invaders actually strike WHILE you’re at home.

Once inside, they can be ruthless.

They thrive on the thrill and power of controlling you and your family, and they can literally stay for DAYS while they carry out whatever acts their sick minds can think of.

As we saw with the famous Petit story, beatings, rape and torture are not off the table for these sick and twisted scumbags.

If you ever hope to survive an attack, you’ve got to be just as ruthless… and sneaky!

Now, I don’t know if Jay Leone read our Extreme Home Defense Tactics manual, but his “bathroom trick” is actually something we talk about in detail in the guide.

But wait… I’m not suggesting you hide a handgun in your bathroom.

Most people can’t, and it can be dangerous if you have little ones around.

The weapon I personally stage is a Zytel shiv knife, which is made out of a super-strong “plastic” that works as an excellent stabbing weapon.

Plus, since it’s not made out of metal, you can hide it in places (like the tank on the back of your toilet) where no home invader would ever think to look.

Yet it will be there ready and waiting for you to secretly pull it out and use it to ambush your attacker when the door opens, right?

It’s not that simple…

You still need to know HOW to use these sneaky tricks to survive a violent home invasion.

Not only does it include the right way to pull off the “bathroom trick” Jay used to save his life, but it also contains tons of other sneaky tactics to use when a violent home invader is threatening you and your family.

Things like how to create a safe room… how to use “fatal funnels” to your advantage… even “rape counterattack” strategies and how to rescue a loved one being held hostage.

Don’t take chances on your safety or your family’s.

Grab your copy of Extreme Home Defense Tactics now so you can be ready for any scumbag that decides to show their face inside your house.