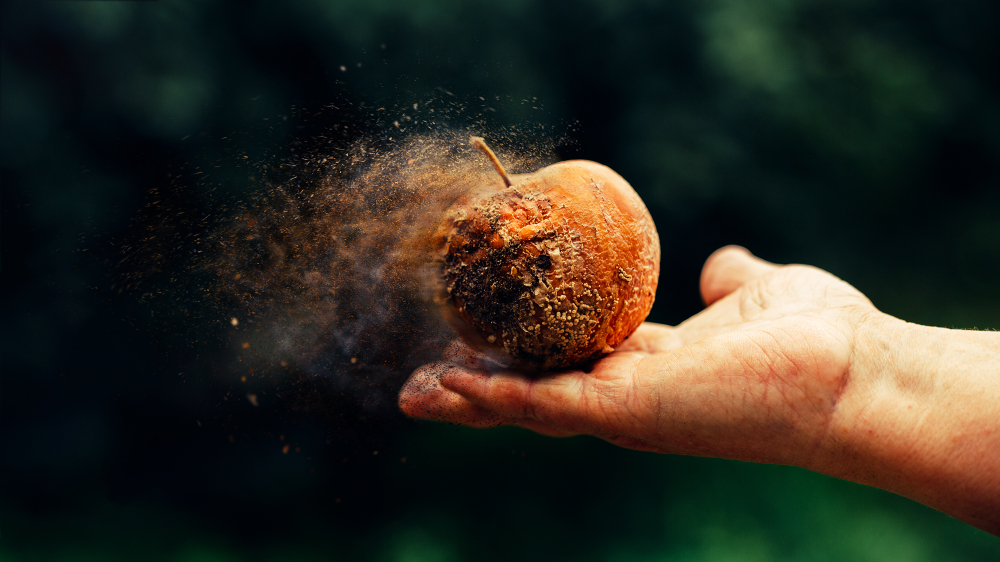 Has the Apple Gone Rotten?

Apple proudly accepted its Q3 participation trophy yesterday, banking a 4% gain in after-hours trading for a quarterly report that was not as god awful as everyone thought it would be.

(Reminds me of when my old man would buy me an ice cream for not “getting in other players way.”)

In an interview with the New York Times, Apple’s Finance Chief Luca Maestri said profits had fallen while sales had risen because of narrower margins due to foreign-exchange rates. (And it has absolutely nothing to do with plummeting sales of Apple’s flagship product.) 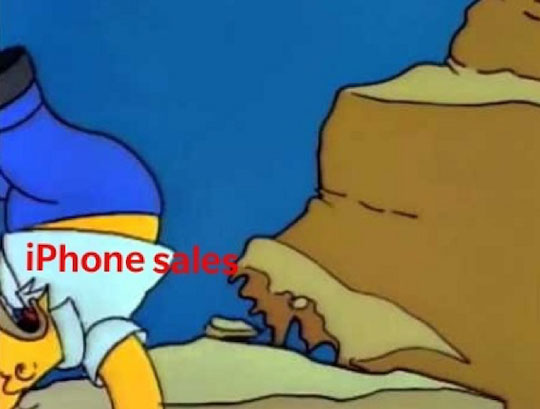 Sales of the iPhone continued to tumble this quarter, falling 12% as millions of people decided to pay their rent instead of dropping $1,500 on a phone that has more power to scroll through Facebook than ever before.

“Obviously on the iPhone, we’ve gone through a period where we’ve seen some revenue declines,” Maestri told the NYT yesterday. “But we are very excited about our product road maps, and we’re very optimistic about the future.”

On a slightly more chipper note, Apple’s shift in focus to its subscription services (Apple TV, Apple Music, and Apple Don’t Leave Us, Please) was rewarded with a revenue gain of 12% to about $11.5 billion.

Its wearables business (which includes Airpods, Apple Watch, and should but doesn’t include black polo necks) grew nearly 64% to $5.5 billion, surpassing the iPad in sales for the first time. (Oh my god, I completely forgot iPads existed.)

In China, where iPhones sales are continuing to fall, the overall number of Apple device users had grown this quarter, driving a rise in services sales.

It was a mixed bag (with more granola than chocolate) but investors were just happy to see that Apple didn’t lose its pants mid-game and pass to the other team… twice (sorry, dad).

The company’s stock (APPL) rose 4% in after-hours trading and continued to rise more than 4.3% in the morning trade.

Investors have long been anxious about Apple’s ability to innovate and grow without Steve Jobs. But only now, eight years after the man in mom jeans passed away, have Apple’s finances demonstrated a sustained weakness.

We know how we feel about Apple’s situation (peep the name of this newsletter) but I’m curious about what you guys think, especially the Apple users.

Are the golden years over? Is there still steam in this engine? Has your opinion of Apple changed over the years?

Click here to send me an email and tell us if you think this apple’s gone rotten.

Despite being blacklisted by the U.S. and dragged almost daily in the media, Chinese telecom giant Huawei somehow managed to grow its sales by almost a quarter in the first six months of this year.

“Neither production nor shipment has been interrupted, not for one single day,” Liang Hua, Huawei’s chairman of the board of directors, said yesterday. “No matter how many difficulties we might face, we remain confident in the company’s future development.”

Huawei danced around actually saying this in its presentation in Shenzen yesterday. But its a privately owned company so it can choose what financial results it wants to release or not. (Just as I can choose to not tell you how much ice cream I may or may not eat every day. It’s none of your business and the answer is a lot.)

Sales of Huawei phones plummeted in Europe and the U.S. after President Trump blacklisted the company and Google said it would no longer allow Huawei to use its Android operating system.

(In fact, my relatives in Ireland called me just this weekend to ask if it was a good idea to buy a Huawei phone. I told them under no circumstances are they to try and call me again.)

President Trump lifted the ban on Huawei buying U.S. tech after a nice little chat with Chinese President Xi Jinping at the G20 summit in Japan. But by then, some patriotic American companies had already developed loopholes to circumvent the ban.

After checking with their lawyers, companies realized that if their product was made outside the U.S. they could ship it directly to China without technically violating the terms of the ban.

“Once we determined that we could continue to resume most of those products, it really got back to normal pretty quickly,” Dave Pahl, the head of investor relations at the chipmaker Texas Instruments, said last week.

Huawei may have been able to paper over the cracks of a disappointing Q2 with some selective reporting and a flashy PowerPoint. But even the company’s execs admit that the second half of the year might not look so rosy in comparison.

Speaking to Italian journalists earlier this month, Huawei founder Ren Zhengfei said Huawei’s dependence on U.S tech was “bullet holes” in its products. (The Chinese have a wonderful flair for extremely dramatic turns of phrase.)

“We can stand on our own right now,” Mr. Ren said. “We don’t need to depend on the U.S. to continue serving our customers. The more advanced a system is, the more capable we are of standing on our own.”

Well folks, its right around that time again.

Let’s roll out the blue carpet for the 1 million Democrats running for president in 2020 and recap the highlights from the second Democrat debate. (Part one. Yes, there’s still too many of these folks to fit on single stage.)

Folks expected to see a clash last night between senators and seniors Warren and Sanders, who are pushing some unapologetically progressive agendas in their 2020 campaigns.

But in a twist worthy of a prime time television show running out of steam, Bernie and Liz were forced to team up to defend themselves against a horde of more moderate (and mostly younger) Democrats.

Maryland politician and robot that just learned how to smile John Delaney accused Warren and Sanders of pitching “fairytale policies.” (Should Centaurs get human rights? They’re like 75% horse, but the top 25% is very vocal.)

Warren responded, with one of the most newsable moments, prompting a roar of applause from the audience. (Old media is dead. There are only newsable moments and tweets now.)

“I don’t understand why anybody goes to all the trouble of running for president of the United States just to talk about what we really can’t do and shouldn’t fight for.” 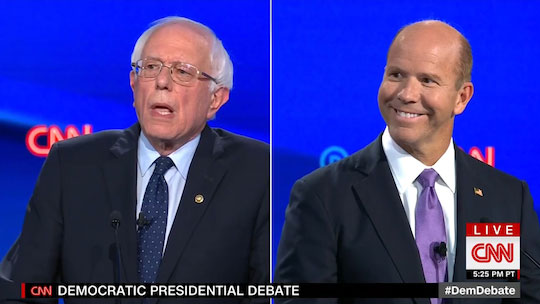 “Could someone get out there and reset the John Delaney bot before sparks start flying out his ass?”

Montana governor Steve Bullock warned that “wish list economics” was a surefire way to lose against President Trump this election season. (No. 1 on my economic wish list? I wish my dog would get a paying job. She owes me years of back rent.)

Former Colorado Gov. John Hickenlooper jumped on the dogpile, saying he considered himself a progressive but he’s “a little more pragmatic” than the pitchfork twins.

Senator Sanders won “Best Burn” of the night when Tim Ryan accused him of not knowing if his plan would cover “all healthcare needs for senior citizens,” including dental care and hearing aids.

The debate wasn’t even over and the Sanders marketing department had turned the moment into a product they could hock on its website. 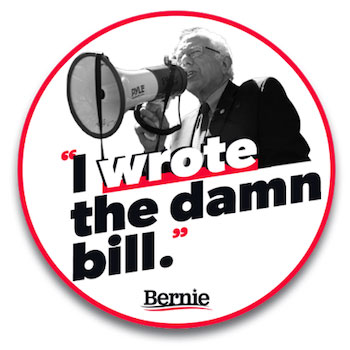 Even a socialist can spot an opportunity for some good old-fashioned capitalism.

We’ll be back tomorrow with coverage from the second night of debates. But before then I’d like to hear from Dems and Republicans. What did you think about last night’s debate?

Click here to shoot me an email and we’ll have it out in the comments tomorrow.

For years, Big Alcohol has fought to keep marijuana illegal, spending billions on lobbying against their number one competitor.

But now that the writings on the wall and marijuana legalization in the U.S. is all but guaranteed, Big Alcohol is scrambling to claim its piece of the fastest-growing pie in the world. (Incidentally, Big Alcohol is what my wife calls me when I drink.)

Right now, some of the biggest names in the business are working around the clock to develop the holy grail of marijuana legalization: a drink that replicates the effects of alcohol… but with none of the calories… and no hangover.

Now, if you’ve been following America’s weed story over the last decade, this probably isn’t any news to you. But what may be news… is that there’s a backdoor into this huge marijuana-infused trend.

One of my researchers first stumbled across this opportunity about three months ago at a private “financial influencers” dinner… where the CEO of a small company told him about an eccentric Princeton scientist and his new marijuana technology.

Right now, we’re in the endgame of vetting this insane opportunity. But once it’s ready, you’ll be the first know.

Last night, I received an email from a disgruntled reader who wanted to call out some fake news in our very own One Last Thing. We’ve never been ones to shine away from a little controversy so I say, bring it on:

Look closely at the woman on the right. That is Angelina Jolie in a MOVIE called, I believe, HACKERS. Research your articles before you print!!

My God, she’s right! I had no idea the only people capable of recognizing Oscar winner Angelina Jolie were our distinguished readers. 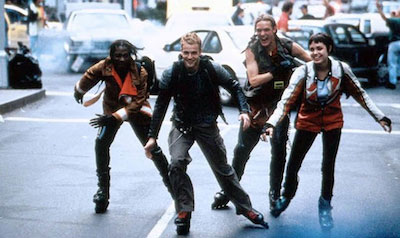 How could we possibly have missed that, Marlene?! What kind of ding dong shop are we running here?

Unless… this is crazy… but it’s almost like someone was making some sort of joke?

What do you think, Marlene? Could that have been it?

Nah! Of course not! Our mistake.

We’ll be sure to call you if we ever need your amazing superpower of spotting one of the most famous people on the planet in a production still.