Google is Dead. What Now?

“In 1990,” Ari Emanuel wrote on his Medium page, “I picked up a book by George Gilder called Life After Television. It changed my life.”

Ari Emanuel is an American talent agent with a net worth of $450 million.

He’s also one of the most powerful men in Hollywood.

Had he not picked up Gilder’s book and taken its predictions seriously, however, his life would likely look very different today.

Gilder’s predictions, says Emanuel, “caused me to imagine technology that could move so fast that our industry might be gone in a decade or two. Most of the people where I worked couldn’t see that. They bet on the past. Because of George’s book, I bet on the future and left to start my own business.”

It was one of the hardest decisions of his life, Ari said, “but I’ve never looked back. George predicted a world where traditional network television programming ended because of computers, digital video and fiber optics.

“You can still call that box in your house a TV, but the TV business as we knew it in those days is gone. We didn’t have the words to describe all the inventions George talked about back then like ‘teleputers’ and ‘channels of information.’ But today we know them as iPhones and the web. The internet, mobile and streaming revolutions happened just as George predicted.

“Watching George’s predictions happen,” Ari goes on, “living through them and building my business around them, I learned that the cycle of innovation doesn’t stop after TV. Surviving the next revolution means connecting the dots early and trusting your instincts when things are about to change.”

Another example of a well-known powerhouse influenced by Gilder’’s book: Steve Jobs.

Steve Jobs famously said that taking LSD was one of the most important things in his life, crediting the experiences he had on it for much of his success.

Since then, many have speculated whether Jobs would’ve ever invented the iPhone without taking LSD.

We suspect something else happened.

Rather than giving LSD all the credit…

It’s more likely Jobs ran with the idea after reading it in Life After Television.

Take, for example, this excerpt:

“The most common digital computer of the next decade will be a digital cellular phone with an IP address… connecting to thousands of databases of all kinds… it will be as portable as your watch and as personal as your wallet; it will recognize speech and navigate streets; it will collect your mail, your news and your paycheck. It just may not do Windows. But it will do doors — your front door and your car door and doors of perception.”

Long before the iPhone was introduced in 2007, Jobs took notice of this prediction and passed the book out to his colleagues.

The rest, as they say, is history.

Ari Emanuel was lucky enough to get a glimpse of the future and set his empire up before any of his colleagues knew what was coming.

(And, thing is, his colleagues thought he was a madman for leaving his cushy job in TV.)

Steve Jobs saw the future of technology and positioned himself as a genius pioneer.

Today, says Gilder, we’re on the cusp of another technological revolution… one just as big, if not bigger, than the last.

He lays it all out in his latest book, Life After Google: The Fall of Big Data and the Rise of the Blockchain Economy. 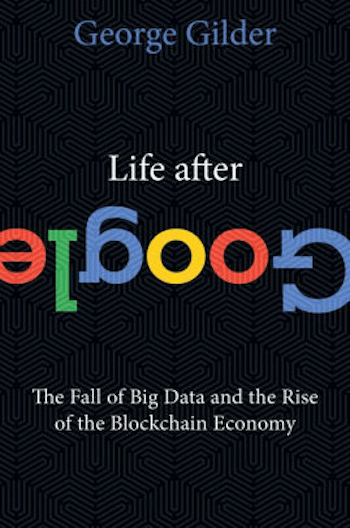 As the Old Guard winds down, says Gilder, the new system is being built right under our noses:

“Governments and investors everywhere should welcome the explosion of creativity in crypto, preparing a new financial system of the world for the moment when the fiat currency piñata bursts at last.”

As you may know, we’ve spilled no shortage of virtual ink about bitcoin, blockchain, and our decentralized future.

We asked George to join the Laissez Faire team.

That way, you, our valued reader, can get even deeper insights you won’t find anywhere else on what to expect in the next technological leap.

And show you precisely how to capitalize.

So… without further ado…

We invite the latest member of our team, George Gilder, to rap about the biggest internet security breakthrough in decades…

And why, while the naysayers sneer, NOW is the time to position yourself for what’s to come.

The current internet infrastructure was built for a simple purpose: sharing information.

The information superhighway was launched by academics to allow researchers on various projects around the world to collaborate.

But as you know, the internet is now used for much more than sharing ideas.

We send money. We log in into bank accounts. We enter our social security numbers. We make video conference calls with colleagues.

Yet the infrastructure of the internet hasn’t been upgraded since its inception.

We all know the result: a cybersecurity nightmare.

Of course, the various vendors don’t like when this happens. But it’s only an inconvenience for them. The true burden falls on the consumer.

You’re in charge of replacing credit cards, switching accounts, and dealing with the fallout.

So there’s no incentive for the Googles, the Facebooks, the Amazons, of the world to change.

But this is all going to change sooner than you think, thanks to a new technology that’s creating an explosion of new possibilities for advancement.

But in order to appreciate everything internet 2.0 will provide, I need to reveal why the current system is so fundamentally flawed…

The Danger of Centralized Security

To understand the massive security nightmare that the internet currently represents, we need to take a step back.

In order for information to be shared across the internet, it must be copied. Yes, the internet is a gigantic copying machine. And it’s very efficient for sharing data and documents.

Now, when these transaction entities communicate across the internet, they ultimately have to be translated in to readable forms. As in forms of communication that can potentially be captured by hackers.

Of course, this structure was so vulnerable that the big companies doing transactions — Google, Amazon, Facebook, and eBay — created walled gardens for their own commercial domains. There they could accommodate commerce among their mostly locked-in users.

So now we have the internet dividing into these pyramids regulated by a few giant companies across the net.

This caused increasing segmentation. Within the segments, the big companies collected more and more private data and protected them with firewalls and encryption.

But as time passed, they discovered that centralization is not safe either.

Instead, it actually solved the biggest problem that hackers face. It tells them exactly what’s important, and where it is, putting the entire internet at risk.

That’s like storing your entire nest egg in a giant safe with a blinking sign… in your front yard.

This is the fundamental vulnerability of all centralized security and classification systems that are associated with it.

Centralized security is not the answer.

The Next Generation of Security Infrastructure

The ability to implement distributed security was not even possible before. It’s only achievable because of the fabulous advances in solid state memory that we have in our devices today.

And here’s where the solution comes in — the new infrastructure of the internet.

Thanks to these advancements, we can distribute a compressed version of all the transactions that are conducted, and put them into a particular blockchain.

Now, most people associate blockchain with bitcoin. But it’s much more than that.

It’s a ledger that distributes all the personal information across the network, just as human intelligence is distributed across the world.

It’s not agglomerated in giant data clumps. It provides a timestamped, immutable record of all the transactions that have occurred in a particular transactional arena.

And here’s why that’s a major breakthrough for security…

Because the record is distributed to every node in the network, the information isn’t in one place — where it is surrounded by hackable surfaces.

Instead, a hacker would have to attack all the records of the transactions across the whole internet before they can change anything or steal anything.

That’s the big breakthrough that’s made possible by the blockchain.

An immutable record of timestamped transactions or important documents or classified data, all made secure by distributing it across the entire internet rather than putting it all in one “safe.”

What will this new internet infrastructure look like for you?

How the Cryptocosom Will Change Lives

It means that you won’t have to worry about being in charge of security. You won’t have to learn a separate username and password for all the various vendors on the internet

No sets of security questions. No remembering your mother’s maiden name. No entering the last four digits of your social security number.

The massive amounts of security data that you need to master to navigate through the different walled gardens in the internet all go away. Instead, they get resolved to your own identity.

Instead, the burden now falls to the companies.

They need to master all of the private keys of all their customers. Not the other way around. Because data, including your identity, is being verified and distributed everywhere. Not just in a particular walled garden.

You’ll be in charge of who can access your data. In fact, you’ll be able to charge people for using your immediate data. No more watching ads on YouTube without receiving something in return.

Plus, micropayments will be rendered possible by this technology, which will mean hassle-free small payments for small goods and services on the net.

And the whole system becomes more secure and more responsive to your own needs and your own security.

In fact, the blockchain will become so fundamental to the new system that its very name will be derived from it. I call it the “Cryptocosm.”

And this isn’t just going to be a benefit for consumers. Investors will have several ways to profit as this internet shift emerges.

I’ve recently discovered a few companies that are leading the charge, and I plan to reveal them to a small group of readers on January 26.

More on that to come.