Fear Not the Nut

Over the weekend, Apple announced it will close all stores and offices in China until Feb. 9 because of the whole super virus pandemic thing. (Which may just be one of the Seven Great Plagues that foretold the second coming of #BabyNut.)

“We will continue to closely monitor the situation and we look forward to reopening our stores as soon as possible.”

I bet they are.

While Apple has struggled to compete with China’s homegrown brands, the country still accounts for a fifth of Apple’s total sales. (China’s a big fat country y’all. Even a small percentage of China is a heck of a lot of people.)

Apple’s spokesfolks have declined to comment any further on the damage this decision is likely to have on this quarter’s bottom line. But as we mentioned in one of last week’s reports, it isn’t just falling sales in China that could impact the company’s 2020 outlook.

The vast majority of the company’s sleek and slightly douchey products are assembled in China, which is expressed here in this rigorously researched mathematical graph: 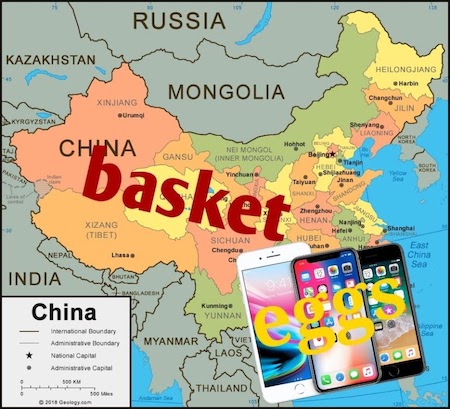 The Chinese government has mandated that many of the country’s almost 3 million factories remain closed until Feb. 9.

It’s unclear how many of Apple’s factories will be affected before this whole global virus crisis is over. But top Apple analyst Ming-Chi Kuo cut iPhone shipment forecasts for Q1 of 2020 by 10%.

In its revenue guidance last week, Apple provided a wider-than-usual range of between $63 billion and $67 billion to accommodate the 90s disaster movie that is our lives.

Good news for the legions of wimpy kids who live in fear of the #BabyNut: the FDA has just approved the first ever treatment for peanut allergies (causing a little-known stock, AIMT, to surge 17%).

The treatment, Palforzia, comes in the form of a powder with trace amounts of peanuts that is swallowed daily. Over time, the dosage is increased and the child builds up a resistance to nuts. (Though, unfortunately, there is still no known way to cure peanut kids of their insatiable love of Japanese anime.)

Nina Nichols, who entered a Palforzia research study as a teen, told NPR that the peanut powder has been “a life-changer.”

With that said, Palforzia kids won’t be pounding packets of peanuts anytime soon. Palforzia is an important step in treating severe allergies, but it isn’t a cure.

A handful of nuts will still trigger an allergic reaction in your little anime lover. But it does mean that if a rogue cashew secrets its way into their nutless nutrition, they won’t just die.

In a study of 500 children, two-thirds who received Palforzia could eat two peanuts without triggering an allergic reaction. (Mr. Ambassador you are really spoiling us with these two peanuts!)

“For so long, we had nothing to offer these patients,” Dr. Pamela Guerrerio of the National Institutes of Health told NPR. “We finally have a treatment. That’s a big step.”

Aimmune Therapeutics, the little-known company behind the two-peanut miracle, saw its stock (AIMT) surge 17% in early trading this morning.

The company’s execs say they hope doctors can begin prescribing the treatment in “a matter of weeks.” The treatment’s list price is set at $890 a month, but how much you pay will depend on how crappy your insurance provider is.

The Robots Are Making Drugs Now

British startup and annoyingly named drug company Exscientia claims to be the first company to have created a drug developed by an AI. (And I’m not saying I don’t trust robots to make drugs that won’t wipe out the human race… but that’s exactly what I’m saying.)

The narcobot was able to take a drug, which is designed to treat OCD, from conception to human trials in less than a year.

Of course, the staggering speed with which an AI like this can test and develop a drug has enormous potential. But skeptics worry that this technology might be dangerously unreliable or simply just overhyped.

“Exscientia may well have moved a compound along at high speed into the clinic,” Derek Lowe writes for Science Translational Medicine.

“But this particular example is not going to accelerate drug discovery much, because this is speeding up a minor part of the process and (for this target and indication) one that is nowhere near a rate-limiting step.”

Exscientia CEO Andrew Hopkins argues however that AI means synthesizing fewer compounds for testing and running fewer experiments which will get drugs to market at a much faster clip than we’ve become used to.

For now, we’ll have to wait and see if this robot has the chops to compete with human docs.

The first phase of human trials will take place in Japan later this year, where Japanese pharmaceutical company Sumitomo Dainippon Pharma will oversee its clinical development.

Dr. Honda will see you now.

Today’s One last Thing is another chapter in out exceptional investor’s series, where some of the best investors I know give us their best investing advice.

Today, macroeconomist and editor of Money & Crisis Graham Summers reveals his top two lessons every investor needs to know. (Hint: it’s got nothing to do with the coronavirus or any of the other drama in the news today.)

How to Handle Changes in the Markets

As part of my daily work on Money & Crisis, it’s my job to brief readers on what’s happening in the markets, so that investors like you can use that knowledge to make money.

That involves me covering everything from geopolitics to international trade to economics. I break it all down for you.

And with the markets down right now, I could go into detail about the big items rattling investors right now ― things like the coronavirus outbreak, the impeachment trial, or earnings season.

But as I’ve said before, knowing the reason stocks are down isn’t important. Instead, we need to focus on what to do in this situation. Which brings me to an important point…

The single biggest mistake I see investors make is becoming emotional and panicking, especially when the market is a sea of red.

During my nearly 20 years of guiding people through the markets, I’ve seen this countless times.

Getting emotional about a trade or a down day ALWAYS makes the situation worse. The ability to control one’s emotions and maintain one’s discipline is what separates traders who are EXTREMELY successful in the long term from traders who end up losing money time and again.

It’s absolutely essential to “manage the trade” by controlling our emotions.

One of the most difficult parts of successful investing is sitting still. (As someone who gets very excited about investing, I know firsthand how difficult this can be.)

However, in my experience, sitting still is perhaps the most important skill an investor needs to have.

After all, it is the urge to jump ― even when there isn’t a clear setup ― that leads to losses.

The reason is simple. In investing, you only have control over two things:

Everything else that happens in between those two items ― changes in the economy, the markets, etc. ― is completely outside your control.

I know. These lessons are hard to live by. It takes discipline to adhere to them.

But they’ll save you money in the long run.