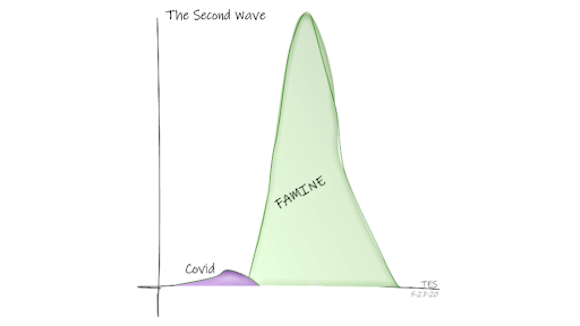 Earlier this year, a paper written by German official Stephan Kohn in the Department of the Interior, the agency responsible for risk assessment and the protection of the population against risks, was leaked to the public.

It is now known in Germany as “The False Alarm Paper.”

The 83-page, highly detailed, paper, written in May, came to the incredible conclusion that there was not sufficient evidence for any overwhelming health risks from COVID-19 for the German population.

But, Kohn said, there was, in fact, enough evidence as early as April to suggest that the lockdowns had already caused, and would continue to cause, devastating health and economic damage, the likes of which could’ve been easily avoided with a more targeted approach.

“The collateral damage of the corona crisis is now gigantic ,” he wrote. “A large part of this damage will manifest in the near and distant future. This can no longer be prevented, only limited.”

This, he concluded, would lead to very high claims for damages, for which the government would undoubtedly, without question, be blamed and held responsible.

Although this is, months later, coming to pass (bankruptcies, as you’ll see are through the roof in Germany… and the world), the author of the paper was suspended, and his conclusions were, despite the cat being out of the bag, swept under the rug by German public officials and the media.

Reiner Fuellmich, a successful German lawyer, explains in a recent video that, for this reason and many others, soon he and “an international network of lawyers will argue the biggest tort case ever,” against what, in his own words, he has called “probably the greatest crime against humanity ever committed.”

Fuellmich has since turned much of his attention and resources into the Corona Investigative Committee in Germany where he and three other lawyers have been building a class action lawsuit against those responsible for, he says, “deliberate panic mongering, and the corona measures enabled by this panic.”

He mentions WHO specifically as one such institution allegedly involved in “panic mongering.” Strangely enough, the WHO has only recently begun to change its tune.

Recall that, in March, Director General Tedros Adhanom said this, clearly advocating for China-style lockdowns across the world:

“This epidemic can be pushed back but only with a coordinated and comprehensive approach that engages the entire machinery of government.”

Recall also how Tedros gushed at China’s response to the virus, despite the fact it was clearly beset with so many human rights violations even Kim Jong Un was probably getting a little jealous.

Just last week, however, the WHO’s COVID-19 special envoy David Nabarro said: “We in the World Health Organization do not advocate lockdowns as a primary means of control of this virus.”

Getting back to the utter devastation brought about by the blanket lockdowns, consider also, to Kohn’s prescient point back in May, in Germany alone it’s been estimated 500,000 to 800,000 bankruptcies are expected in the fall to strike small and medium-sized businesses, which form the backbone of the economy.

“This,” Fuellmich, “will result in incalculable tax losses and incalculably high and long-term social security money transfers, for, among other things, unemployment benefits.”

With mass-layoffs occurring all throughout the States, a recent study published in The Lancet says: “The COVID-19 pandemic has led to high rates of unemployment across advanced economies. The burdens associated with unemployment, however, have not hit all households equally. Families with children and unemployed parents have reported especially high rates of hardship, with potential long-term consequences for child wellbeing and development.”

“Mothers,” the researchers go on, “have been hit hardest; the share of children with an unemployed mother reached 18·8% in April, 2020… the highest rate since at least 1967.”

Also concerning, says Fuellmich, is the threat of unchecked tyranny, and basic human rights violations, exploding across the world. “More and more scientists, but also lawyers,” he says, “recognize that as a result of deliberate panic mongering… democracy is in great danger of being replaced by fascist totalitarian models.”

In parts of Australia, people who didn’t wear masks, or who allegedly did not wear them correctly according to officials, were arrested, handcuffed and thrown into jail. In the Philippines, as we showed last week, they run the risk of getting shot.

“But,” Fuellmich goes on, “even in Germany and in other previously civilized countries, children are taken away from their parents if they do not comply with quarantine regulations, distance regulations, and mask wearing regulations.”

The effect all of this is having on children across the world, though underreported, is absolutely devastating. “According to psychologists and psychotherapists who testified before the Corona Committee,” Fuellmich reports, “children are traumatized en masse, with the worst psychological consequences yet to be expected in the medium and long term.”

And we haven’t even mentioned one of the biggest problems yet, which has also gone largely underreported; the threat of widespread famine in the developing world as a result of what columnist Sherelle Jacobs of the Daily Telegraph called “champagne lockdownism.”

Renowned scientist John Ioannidis took it upon himself to study the second-order effects of the lockdown in relation to the excess deaths we’re seeing around the world, often, but often incorrectly, attributed directly to COVID-19.

Ioannidis has long been a critic of the lockdowns, and was one of the few who tried to warn Trump against locking down the country as early as late March.

Ioannidis, to be sure, a researcher at Stanford University, is no slouch. He’s beendescribed by The Atlantic as “one of the most influential scientists alive.” He’s best known for exposing the flawed logic and inherently bad science underlying beliefs driven by “scientific consensus.”

(“The science is settled!”)

As Ioannidis wrote in one of the most widely cited papers in the medical literature, “Empirical evidence on expert opinion shows that it is extremely unreliable.” Majority scientific opinion, he said, “may often be simply accurate measures of the prevailing bias.”

In a study published on October 7, 2020, Ioannidis has come to some startling conclusions.

2] This figure is difficult to truly get a handle on because adherence to stringent clinical case definitions plus imaging/pathology documentation for COVID-19 causal impact is often lacking. “In high-income countries,” he writes, “almost all the deceased have known comorbidities, raising causality debates on whether some deaths are with rather than by COVID-19.”

3] “Moreover,” he says, “multiple studies have identified pre-existing cellular immunity that may be effective against SARS-CoV-2 in 20-50% of participant samples. If so, the proportion of people who need to be infected to reach herd immunity may be much lower than originally estimated.”

The adverse impact of the lockdowns, says Ioannidis, will have a much larger long-term impact on excess deaths than is being reported. “There is strong evidence,” he writes, “on the adverse effects of unemployment, financial crisis, depression, and social isolation on long-term morbidity and mortality.

“Excess deaths from measures taken is likely to be much larger than the COVID-19 deaths, e.g. disruption of tuberculosis programs alone is expected to cause 1.4 million extra deaths over the next five years and the death toll from famine can be even more staggering.” (Emphasis mine.) 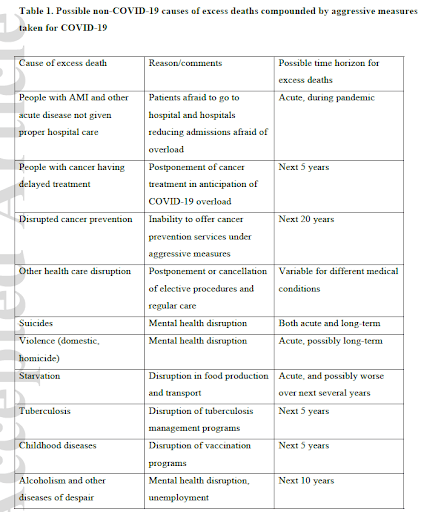 Estimates based on growth projections from a June 2020 Global Economic Prospects report from the World Bank show that, when compared with pre-crisis forecasts, COVID-19 could push from 71 million to 100 million people into extreme poverty in 2020 alone.

And, as another study released by the World Bank points out: “A large share of the new extreme poor will be concentrated in countries that are already struggling with high poverty rates and numbers of poor. Almost half of the projected new poor will be in South Asia, and more than a third in Sub-Saharan Africa.”

And when we talk about “extreme poverty,” we’re not talking about “Oh, I can’t afford Netflix this month”… we’re talking about, “My child is so skinny I wonder if he’ll wake up.” 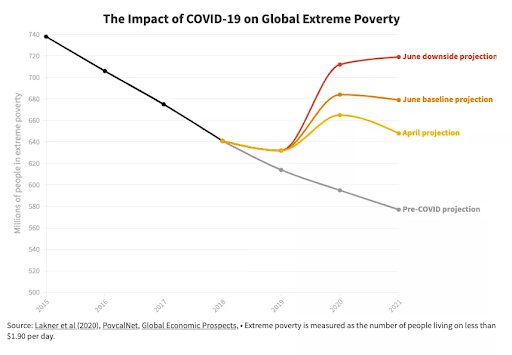 As far as the evidence goes, anyone still defending these lockdowns as appropriate are, despite what they claim, not “following the science” at all. And the consequences are becoming clear as day. 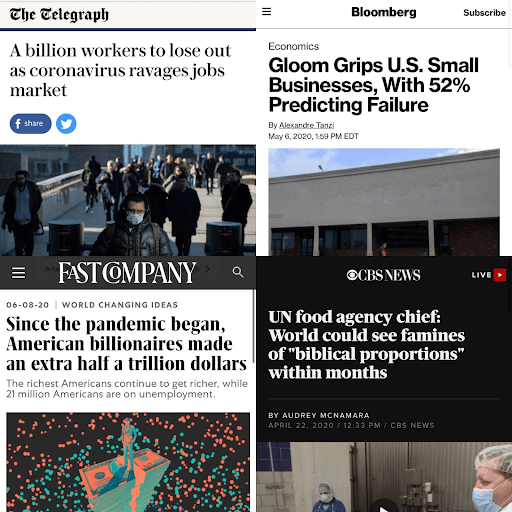 The lockdowns didn’t save lives. The cure has become the disease.