Back then, it sounded like a really stupid question.

I was even told so by someone who’d read a lot of newspapers that day.

Undeterred, I posed the question — “What exactly is a confirmed case?” — to a neighbor, too.

It was as if I asked him what types of potatoes grew on planet Venus in 1993.

He also said something to this effect:

“You’re either confirmed or you’re not. The test will tell you. That’s all you really need to know. The experts have figured out the details.”

Turns out, however, it wasn’t a stupid question. And, as you’ll see, the experts hadn’t figured out the details.

And, because of this, there were a massive (massive!) amount of false positives for the precise reasons we outlined way back in May.

Meanwhile, it took almost four months for the crack team of investigative journalists at the Once-Upon-a-New York Times to catch up… and come to that exact conclusion. 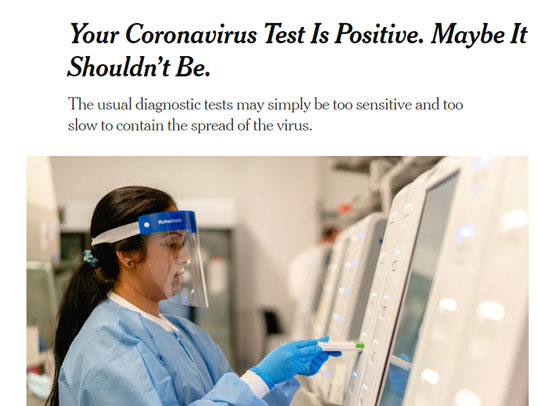 (Hey, better late than not at all.)

Despite this, the mainstream media still largely controls a wide range of allowable mainstream opinion.

Finally, now, we can all begin to nod in unison and take it all very seriously.

And we were far from the only ones being labeled “conspiracy theorists” for it, too.

We laid out the potential problems with the PCR tests in detail right here.

[We also provided plenty of opportunities to help answer the “excess deaths” question, too, even without the full picture we have today. Which we now know includes skyrocketing teen suicides, drug overdoses, murder rates, global nursing home neglect, and much more. But more on that soon.]

First of all, we showed back in May how, in the past, the CDC was against using PCR tests on asymptomatic people for the whooping cough.

Why? Because of the inevitable presence of false positives which would muddy the waters.

Last week, the CDC quietly backtracked on COVID-19 testing, drawing much ire from those heavily invested in the panic, stating that asymptomatic people don’t need to be tested for COVID-19.

Why the backpedal? Well, it seems it’s because the truth about the tests is beginning to slip.

Put simply, PCR tests work by amplifying specific genetic material. The cycle threshold determines how much it amplifies the chosen genetic material within a sample to find a match.

The threshold is crucial. It’s everything. You have to get it right, or you cannot reasonably trust the tests. If you get the threshold wrong, you’ll throw up a bunch of false positives or a bunch of false negatives. And you won’t know what the heck’s really happening in a population.

As we said in May, strangely enough, there’s no “golden rule” for these thresholds.

They’re all over the place.

The FDA initially approved over 30 manufacturers, many of which were using different thresholds for their tests.

There wasn’t (and isn’t) any consistency.

“The Food and Drug Administration said in an emailed statement that it does not specify the cycle threshold ranges used to determine who is positive, and that ‘commercial manufacturers and laboratories set their own.’”

The irony here is, if the FDA had ANY appropriate role in this process, it would’ve been to guide the manufacturers on the proper threshold to use.

That way, the national numbers could have had some semblance of uniformity, and we could, from there, adjust for potential false positives and negatives. Had they done that, we could’ve had a much better chance of warding off the maximum number of false negatives and positives. And we would’ve had a clearer picture of the problem.

No test is perfect, and we must assume that the FDA knows this. But the FDA proved itself far too incompetent to do the ONLY important thing. The “experts,” plainly put, didn’t do their jobs.

And, as a result of this – and as we also pointed out in May — the thresholds on the majority of these tests were TOO HIGH, which just so happened to dramatically raise the likelihood of false positives.

Now, here’s what the NYT published a few days ago (emphasis mine):

“In three sets of testing data that include cycle thresholds compiled by officials in Massachusetts, New York and Nevada, up to 90 percent of people testing positive carried barely any virus, a review by The Times found.

“On Thursday, the United States recorded 45,604 new coronavirus cases, according to a database maintained by The Times. If the rates of contagiousness in Massachusetts and New York were to apply nationwide, then perhaps only 4,500 of those people may actually need to isolate and submit to contact tracing.”

What is a “confirmed case”?

Well, in this scenario, a “confirmed case” doesn’t mean much if 90% of the confirmed cases are NOT contagious, not sick, and have completely recovered.

It actually means something entirely different.

In this particular scenario, the vast majority of these “confirmed cases” are definitely not a good enough reason to support draconian lockdowns. They are, for all intents and purposes, false positives.

To fix this testing problem, the NYT offered a solution (again, emphasis mine):

“One solution would be to adjust the cycle threshold used now to decide that a patient is infected. Most tests set the limit at 40, a few at 37. This means that you are positive for the coronavirus if the test process required up to 40 cycles, or 37, to detect the virus.

“Tests with thresholds so high may detect not just live virus but also genetic fragments, leftovers from infection that pose no particular risk — akin to finding a hair in a room long after a person has left, Dr. Mina said.”

And here’s the money shot:

“Any test with a cycle threshold above 35 is too sensitive, agreed Juliet Morrison, a virologist at the University of California, Riverside. ‘I’m shocked that people would think that 40 could represent a positive,’ she said.”

Now, compare this to what we wrote back in May:

PCR expert, professor Stephen Bustin, said cycles should be limited to 35, as anything above that could throw up a false positive.

Furthermore, the guidelines from the Minimum Information for Publication of Quantitative Real–Time PCR Experiments (MIQE) recommended anything 40 or more should be discarded.

It wasn’t a conspiracy theory.

MOST tests were using a threshold of 40, and experts were saying that was way too high.

The CDC itself has said it’s extremely hard to detect any live virus above 33 cycles, but, alas, perhaps taking cues from the geniuses at the FDA, the CDC officials never thought to instruct labs to share cycle threshold (C.T.) information with contact tracers.

“It’s just kind of mind-blowing to me,” virologist Angela Rasmussen told the Times, “that people are not recording the C.T. values from all these tests — that they’re just returning a positive or a negative… it would be useful information to know if somebody’s positive, whether they have a high viral load or a low viral load.”

The astonishing figures bear repeating: In Massachusetts, the Times article reads, “from 85 to 90 percent of people who tested positive in July with a cycle threshold of 40 would have been deemed negative if the threshold were 30 cycles.”

“I would say,” Dr. Michael Mina, an epidemiologist at the Harvard T.H. Chan School of Public Health, told the Times, “that none of those people should be contract-traced, not one.”

These “confirmed cases” were the cornerstone of how we were reacting to the pandemic. And they were disastrously wrong.

The most damning part?

Our officials – the much lauded “experts” — had this crucial information about the PCR thresholds all along!

They knew. (How could they not have?)

But there’s another problem the Times only mentioned in passing.

(We might have to wait a few more months for this one.)

As we also pointed out in May…

But given what we know now, that’s probably not the case.

The results you get are only as good as the tests you use.

(In the same way, as we saw yesterday – in the episode called Pick One: The Economy or Granny— your answers are only as good as your questions.)

Perhaps this means that the manner of testing — the PCR tests — is fundamentally flawed.

But you don’t have to take it from me, nor do we have to speculate.

The late Kary Mullis, inventor of the PCR test, said the following when speaking on labs using PCR for testing viral load:

“Quantitative PCR is an oxymoron. PCR is intended to identify substances qualitatively, but by its very nature is unsuited for estimating numbers. Although there is a common misimpression that the viral-load tests actually count the number of viruses in the blood, these tests cannot detect free, infectious viruses at all; they can only detect proteins that are believed, in some cases wrongly, to be unique to HIV [or any other virus].”

Since he invented the test, he might’ve known a thing or two about it.

But you know what?

The “newspaper of record” hasn’t said anything about this, so let’s just wait a few more months and see what they think…

Or, better yet, let’s instead listen to those heavily amplified doctors who’ve gotten it completely wrong — like Dr. Birx — who it seems is on the brink of suggesting we wear our masks in the shower and to bed.

When lives and livelihooods are on the line…

Better late than not at all.

How late is too late?

And at what point does negligence of duty become criminal?

It’s an even better question, I would say, than “What is a confirmed case of COVID-19?”