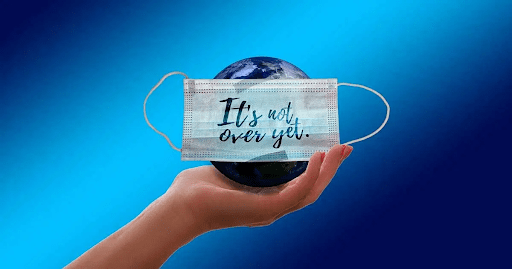 “People won’t say this because they’re afraid of being bullied. But it’s the truth. And more people agree with me than the finger waggers think.”

I wrote a letter to my local paper.

It’s not my best work. I was angry when I (albeit hastily) wrote it.

Surprisingly, however, they just told me they’re going to publish it.

The purpose of the letter? To get the discussion going about the catastrophic effects another one-size-fits-all blanket “second wave” lockdown would have on the local economy.

More on that — and my angry ranty letter — in tomorrow’s episode.

The letter I wrote however is part of a much bigger project.

And I need your help.

People are afraid of the second wave.

Some people are scared of getting sick. Others are more scared of not being able to pay rent.

Others are more afraid of being locked in their houses for six more months with nothing for them or their kids to do.

How could all of these people respond appropriately to a second wave without infringing the rights of the others and staying safe in the process?

Which is why I’ve been toying with the idea of writing a small crowd-sourced (with your help) “survival guide” called:

The Second Wave Survival Guide: How to open up smart, stay open, and thrive, even during the second wave

[Sidenote: It’ll also be a part of our self-publishing narrative, as, once it’s written, I’ll also be using it to show LFT readers (in future episodes) how to self-publish a book for pennies on the dollar.]

I need your help.

INTRO: The Truth Shall Set You Free

(Working Title: The Truth Shall Set You Free)

In Nashville, we saw that public officials kept low numbers a secret because they all but proved the draconian lockdowns to be unjustified.

Furthermore, they chose a flawed hospital bed metric to help them decide when they could open back up. As a local statistician showed, the metric is ridiculous and wouldn’t be reached even in normal times.

Further research into this matter has shown that Nashville officials may have had (what they thought was) financial incentive not to give those numbers to the public. (Just this week, in fact, city officials asked Tennessee Governor Bill Lee for $82.6 million in COVID-19 relief money to expand social services. Of which he promptly rejected.)

I have a strange suspicion this isn’t just happening in Nashville, but all over America.

In how many other places is the data being skewed in favor of the lockdowns so that, perhaps, public officials can file for bailouts? (Only then will they consider letting you get back to work.)

How can we get at the truth of what’s going on behind closed doors and in private email chains of our decision-makers? How can we spread that truth to our local communities and put fire to the feet of our local officials? How can we get the REAL numbers, accounting for any potential false positives or negatives?

How do we open up smart, stay open, and thrive, even during the second wave?

CHAPTER 1. Health: We’ve already seen one solution; telehealth. You can get a prescription for prophylaxis (shipped right to your doorstep) after a 10-minute phone call and for about $100 (and that’s without insurance).

What are some other ways readers can stay healthy and safe, while continuing to live their lives without their heads between their knees, in the event of a second wave?

CHAPTER 2. Children: How to deal with our kids this time around?

If a second wave hits and the schools shut down, what are the options?

How do we creatively homeschool without forcing kids to sit in front of a screen all day? For example, could someone within the community homeschool at their homes?

(Is this allowed? Should it be?)

CHAPTER 3. Community: Where can we find common ground?

My letter to the local paper was ultimately meant to find common ground… and then question the lockdown.

The locals here have a lot of bumper stickers that say “we love local”… but if that’s true, why are we abandoning our local businesses in favor of Wal-Mart, Starbucks, and Krispy Kreme?

Common ground can be found. Looking back, the events of the past two decades have sown discord into every level of our local communities.

2020 has just hit the INSANITY button.

But it’s not too late.

Most people on either side of the political aisle do not want this division, hatred, and chaos. We have no real reason to treat our neighbors like potential enemies, or potential vectors of death. In 2020, where can we find common ground within our communities which transcends political boundaries?

As you know, we’ve published a Side-Hustle Bible which shows 100+ ways to create lasting and potentially lucrative income streams.

In 2020, side-hustles are more important than ever. (Did you get the email I sent you today called, “Afraid of the Second Wave? Try This…”?)

How can those struggling through this pandemic make money while out of work? What ways can they both serve their communities and make rent?

(Idea: Grocery delivery for the vulnerable? What else?)

CHAPTER 5. Civil disobedience: The lockdowns have already been deemed unconstitutional in many states.

Bill Barr has called them the second-biggest violation of civil liberties in American history.

Former federal prosecutor Trey Gowdy has encouraged Americans to engage in civil disobedience in the face of mandates that infringe on our rights.

How do regular Americans engage in civil disobedience in a peaceful, creative, ingenious, “sticky,” and smart way?

Let’s write this thing together.

Stay tuned as the chapters begin to roll out — with your help — in the next two weeks.