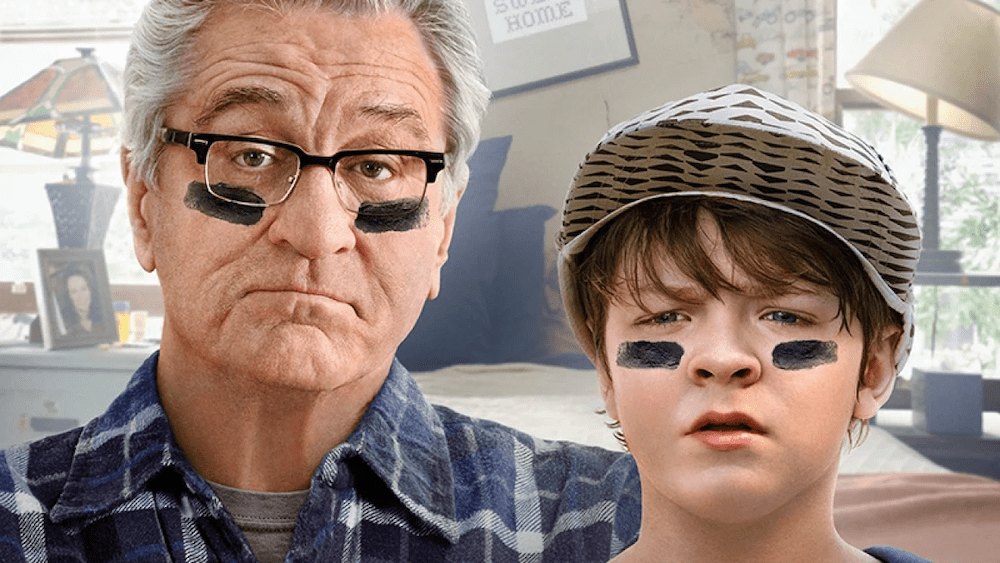 Venmo, the app that makes it very difficult to stiff my friends on the dinner bill, is launching a credit card.

If you somehow still live in a magical world where your tennis friends Bob and Dianne haven’t forced you to download this wonderful app, first of all, please swap lives with me.

Second, its a mobile payment service, owned by PayPal, that allows you to transfer funds to pesky friends and relatives without fiddling with bank transfers or 2 a.m. ATM runs.

Venmo says its new Visa card will launch to “select customers” today, who have probably been “selected” based on how likely they are to spend rack up thousands of dollars in charges on their credit card. The service will roll out to the rest of us plebs in a few months. 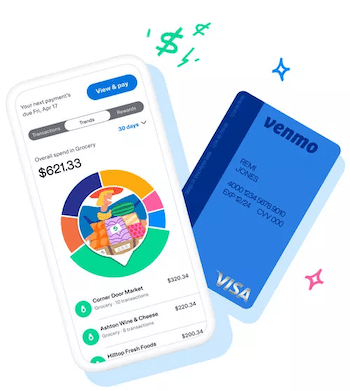 The card is directly integrated into the app, in the hopes of appealing to younger generations who have a slight aversion to credit cards after watching their parents bury themselves in high-interest debt in the early 90s.

Through the app, you’ll be able to track your spending in real-time, make payments on the balance of your card, and take out a high-interest loan to pay Bob and Diane back for six fish tacos and a bottle of Malbec.

You’ll also be able to earn cash back based on your spending habits. Spending on the card is broken down into eight categories, such as entertainment, groceries, transportation, and travel. You’ll earn 3% cashback from your top spending category, 2% from your second-highest category, and then 1% on all other purchases.

Unlike most other cashback cards, Venmo’s Visa doesn’t charge an annual fee. Though you can expect to be charged up the wazoo for cash advances, late payments and interest. The card’s APR ranges from 15.25% to 24.24%, based on your credit score.

Venmo said in Q2 of 2020 it has more than 60 million active users which it can try and hock its new credit card to.

AMC and Cinemark Will Not Close

AMC Theatres and rival Cinemark said they would not shutter theatres even if an evil wizard destroyed every movie on the planet and they had to resort to puppet shows to stay open.

Both chains announced this morning that 80% of their US locations would remain open for the foreseeable future, following an announcement that Regal Cinemas would close all 536 of its US theatres.

Theatres have been hammered this year by studios pulling their big-budget movies and a deadly illness that is transmitted by sitting inside in a giant room with a bunch of people.

Total box office receipts for last weekend came in at just 6% of last year’s figures, according to a senior analyst at Exhibitor Relations, Jeff Bock. (It’s baffling that the American people wouldn’t brave an airborne virus to see an instant classic like The War With Grandpa.) 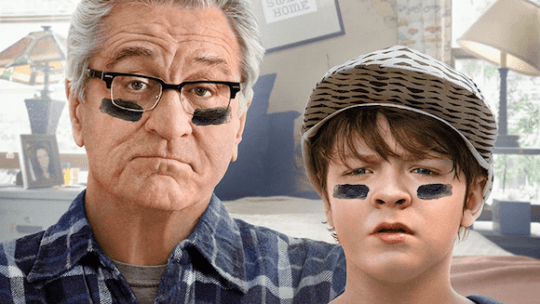 “Old School vs New Cool,” writes the tagline guy who gave up on his dreams 15 years ago.

AMC Theatres is visibly straining under the weight of more than $4.75 billion in debt, racked up buying out competitors and outfitting its theatres with luxury seating ju-u-u-u-u-st before the pandemic hit. On Friday, S&P Global Ratings said AMC would run out of liquidity in the next six months if theatre attendance doesn’t substantially improve.

Meanwhile, Cinemark’s pandemic survival strategy is to push its private theater rentals to boost revenue during the pandemic.

Before the Great Inside Times, renting a Cinemark theater cost between $250 to $500, depending on the size of the room you want to propose to your girlfriend in. Now, you can rent out an entire theatre for as little as $99 and see the fully rendered HD buttholes of Cats on the big screen like it was intended.

“Cinemark’s reopening plan was designed with multiple contingencies in place to ensure we are able to be nimble and react as needed to this ever-changing environment,” said in a statement, as Dame Judie Dench licks her cat genitals on a 45-foot-high screen in the background.

AMC’s stock (AMC) has plunged 41% so far this year, while Cinemark’s (CNK) has tumbled nearly 75% since January.

AMC, in particular, has been challenged by the more than $4.75 billion in debt it amassed before the pandemic from outfitting its theaters with luxury seating and from buying competitors such as Carmike and Odeon.

Europe’s second wave of COVID is starting to pass from young to old, presumably because seniors have been hitting the clubs and doing body shots off each other.

According to the European Centre for Disease Prevention and Containment, cases among those 65 and older are shooting up, leading to a surge in hospitalizations and deaths.

Europe’s younglings have been passing the virus back and forth all summer, with a relatively low number of deaths. But in recent weeks, the infected young have been bringing the virus home for the whole family to play with.

In Spain alone, 547 people died of the virus last week, compared to just 159 deaths in the week ending September 1st. This is due in part to a resurgence in the virus but also in the higher rates of mortality in older patients. 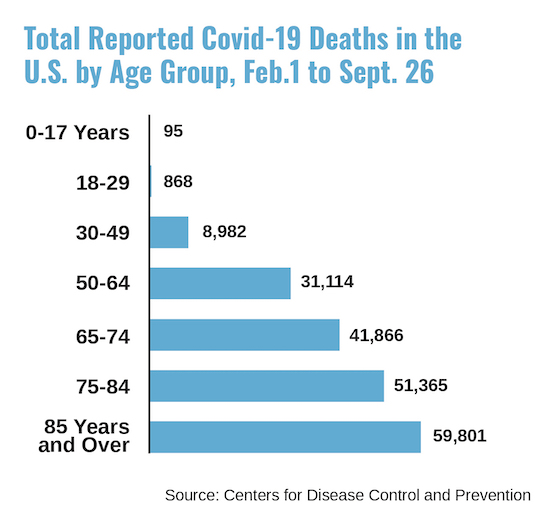 European health officials are advising those 50 and up to protect themselves by limiting social interactions, avoiding crowds, wearing face masks, and buying a giant mech suit for interacting with their grandchildren.

They are also urging folks to get the regular flavor flu vaccine, to prevent overcrowding in hospitals and, according to some early research, reduce the severity of coronavirus infections.

Meanwhile, the UK government is politely asking citizens to try and not kill their parents and grandparents this winter.

“Don’t kill your gran by catching coronavirus and then passing it on,” U.K. Health Secretary Matt Hancock said in an interview with the BBC. 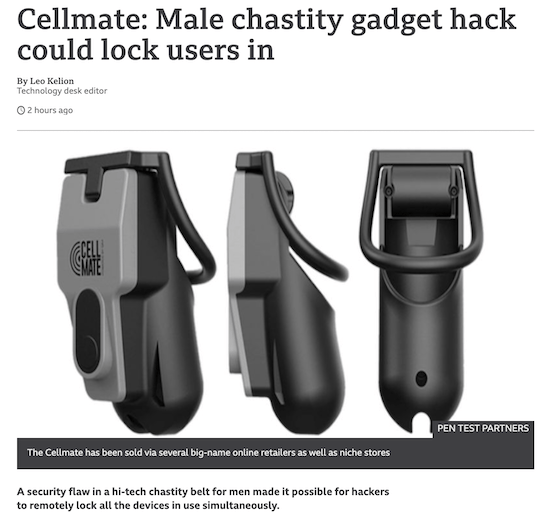 (Source: The very serious journalists at The BBC)

Despite all of the excitement this week, the market remains in a kind of “no man’s land” between resistance (the red line) and support (the green line). Until we break one of these lines with conviction, stocks are in a chop fest. 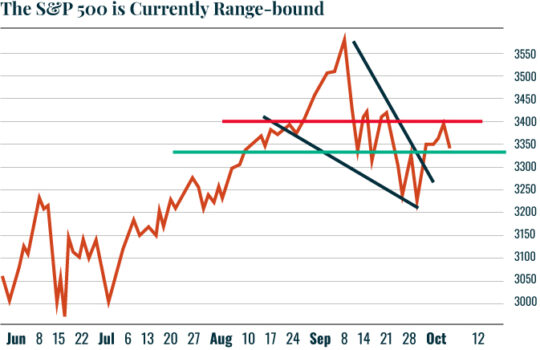 Stepping back from the day to day, the S&P 500 looks to be forming an inverse Head and Shoulders pattern. If we break above that neckline, the upside target will be new all-time highs. By the look of things, we’ll know if this will be the case by the end of the week. 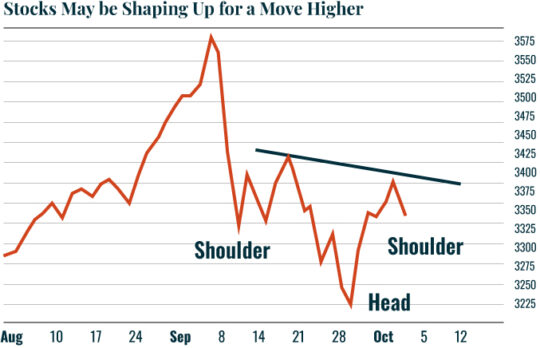 The Driving Force Behind the Market’s Strength

Why would this happen?

Because the Fed and other major central banks have gone “all in” on their efforts to create a stock market bubble.

Forget politics, forget social issues, forget all of that stuff. The one thing that matters to central banks is keeping the markets elevated.

At the end of the day, it all boils down to what I’ve been saying since 2017… that the Fed and other central banks are trapped in a vicious cycle through which it INTENTIONALLY creates bubbles to deal with each successive bust.

The Housing Bubble in the mid-00s.

And now the Everything Bubble in 2020.