Epstein’s Apparent Suicide: Everything We Know

More than 160 flights in and out of Hong Kong airport have been canceled following a sit-in staged by pro-democracy protestors. (A “sit-in” is like a regular protest but instead of throwing Molotovs, you just kinda hang out and eat snacks.)

Thousands of protestors swarmed the airport on Friday night as part of ongoing protests against the erosion of Hong Kong’s independence by China and increasing police brutality.

More than 5,000 protestors chilled in the airport for the entire weekend (which is impressive when you consider how universally awful all airports are) until early this morning when the airport authority announced the sweeping cancellations.

Protestors believed the Hong Kong Police ordered the cancellations to clear travelers out of the airport in preparation for a raid scheduled for later on Monday.

Rather than stick around and get shot in the face with a bean bag, protestors quickly dispersed, allowing the airport authority to start rescheduling flights.

According to Hong Kong officials, service in and out of Hong Kong will resume early Tuesday morning. (Great news, crisis tourists and dads who “paid for this vacation so I’m going to bloody use it”!) 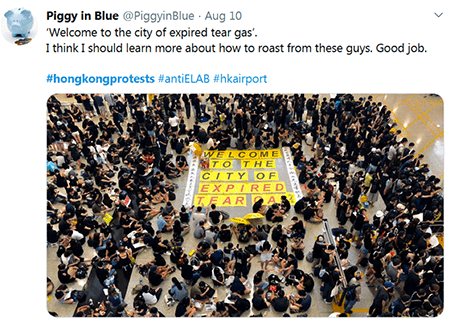 While the airport protest was relatively peaceful (except for funny posters which resulted in some severe burns), violence between protestors and police reached a fever pitch on the streets of Hong Kong.

Reportedly some protestors have started throwing Molotov cocktails at police, which Hong Kong officials characterize as “weapons of terrorism.” Meanwhile, riot police shot a first aid responder in the eye, rupturing her eyeball.

In response to growing concerns over the Hong Kong protests getting out of hand (because until now, this was all 100% totally in hand) and anxiety over global trade, U.S. stock futures slipped this morning.

We’ll have more as this story rapidly descends into a fiery pit of doom.

This election cycle, the discussion on marijuana reform is moving out of mom’s basement and onto the debate stage. (And its bringing pizza rolls, folks!)

The more left-leaning candidates have realized that this topic is a particular weakness of Former Vice President Joe Biden, due to his record on criminal justice. So you can expect to see them lean heavily on it in the next round of debates.

Never one to be shy about shouting his opinions into a microphone in a thick Brooklyn accent, Senator Bernie Sanders pitched his plan on the Joe Rogan Experience podcast last week:

”When I ran for president for the Democratic nomination in 2016, I talked about a broken criminal justice system, which ends up having in the United States more people in jail than any other country,”said Sanders, who was waving his arms around as if trying to make himself appear bigger to a bear.

“And what I call for then, and I call for now, is the legalization of marijuana in America.”

“That [marijuana’s Schedule I classification] is insane. Heroin is a killer drug. You can argue the pluses and minuses of marijuana, but marijuana ain’t heroin. So we have to end that, and that’s what I will do as president of the United States. I believe we can do that through executive order, and I will do that.”

So, “President Sanders” would jam through federal legalization with an Executive Order. Not exactly the most elegant solution. But if Mitch McConnell (who is allergic to passing bills of any kind) remains the Senate Majority Leader after the 2020 election, it might be the only avenue for the Dems to legalize.

Sanders also said if he was elected, he would come back on Rogan’s show to reveal the truth about aliens, thus locking in the stoner vote. (Don’t worry, historically they’re not a very motivated voting base.)

Now, we don’t know who’s going to win the 2020 election. As the incumbent, President Trump has a high chance of holding onto the office. And he’s been hot-and-cold on marijuana reform throughout his time in office.

But the truth is, it doesn’t matter for investors.

If you’re properly positioned before Oct. 17 this year, you could see incredible returns on your investment. And it all has to do with a man we’re calling “Dr. Weed.”

How Dr. Weed Could Make You a Fortune Starting Oct. 17

But in reality, he’s a Princeton-trained scientist that developed this breakthrough marijuana technology.

His company is private. But my colleague James Altucher took a trip down to his secret marijuana lab… and found a “backdoor” way to invest in it.

Click here to see what he discovered and get your chance to create a legal weed fortune.

Epstein’s Apparent Suicide: Everything We Know

That night, he apparently hung himself in his cell. (Because, yeah, if you’re going to commit suicide, that’s the time to do it.)

Now, I’ve read all the conspiracies theories (including one that President Trump and former President Bill Clinton snuck into Epstein’s cell and strangled him with one of Hillary’s pants suits).

But here’s what we actually know right now:

Epstein tried to commit suicide about two weeks ago. He was put on suicide watch for three days, after which, the worst psychiatrist in the world declared he was no longer a suicide risk.

Epstein was taken off suicide watch but, per prison procedure, he was assigned a cellmate and guards were instructed to check on him every 30 minutes (because we all know it takes at least 35 minutes to kill yourself).

And yet, the night he apparently hung himself (or Prince Andrew tricked him into drinking cocaine powder or whatever), Epstein was alone.

His cellmate had been transferred earlier that week. And according to a report by the Associated Press, the prison’s guards were working extreme overtime shifts to make up for staffing shortages, causing them to neglect their duties (because they were all sleepy and such).

Epstein wasn’t found until the following morning at 6:30 am when the guards were making their morning rounds.

Now, no one’s going to shed any tears for this walking dumpster of person. But the victims of Epstein feel like they’ve been robbed of their justice. And there are legitimate concerns about efforts to halt the investigation into high profile world figures who may be (and already have been) implicated in this case.

However, according to Attorney General William Barr, this case won’t end with Epstein’s death and the prison where he apparently committed suicide will be placed under investigation:

“Let me assure you that this case will continue on against anyone who was complicit with Epstein,” Barr said, speaking at a conference for police officers in New Orleans. “Any co-conspirators should not rest easy. The victims deserve justice, and they will get it.”

“I was appalled and frankly angry to learn of the [jail’s] failure to adequately secure this prisoner. We are now learning of serious irregularities at this facility that are deeply concerning and demand a thorough investigation.”

We will get to the bottom of what happened, and there will be accountability.

Barr seems determined to pursue this case without Epstein. But with Epstein’s death, we’ve undoubtedly lost our shot at taking down some of the highest-profile offenders.

Maybe some folks will have their reputations dragged through the dirt because of their association with a child sex trafficker. But there’s no way this gets tied up with a bow.

Over the last two decades, biotech has been a major game-changer in the medical field.

Instead of trying to solve every single problem we have by pumping ourselves with pharmaceuticals, we’ve found ways to use nature’s own toolbox and our own genetic makeup to heal and combat debilitating and rare diseases.

Huge strides have been made in the field in the past 20 years: from sequencing the entire human genome, to harnessing STEM cells from embryos, or epigenetics, where gene expressions can be turned on and off, to CRISPR-Cas9 where damaged genes can be spliced and diced.

These genetic manipulations are producing exciting results and leading to incredible new therapies. But there is a new biotech revolution that Google, DARPA, and Apple are pumping millions into right now… and most folks don’t even know about it.

It has zero to do with STEM cells, epigenetics, or CRISPR-Cas9, is less invasive, and isn’t tied down by a bunch of ethical and moral quandaries.

It has the potential to cure multiple diseases: heart disease, cancer, diabetes, rheumatoid arthritis, hypertension, Crohn’s disease, back pain, headaches, and even ADHD in children.

And it’s already being used to treat a rare form of cancer.

There’s a lot to unpack here. So we’re going to be exploring the amazing things this new type of biotech is doing and the amazing potential it has.

And yes, before you ask, one of our analysts is researching an investment opportunity into this tech. But we’re not done vetting it yet.

Once we’re sure this pick is as amazing as we think it is, you’ll be the first to know.