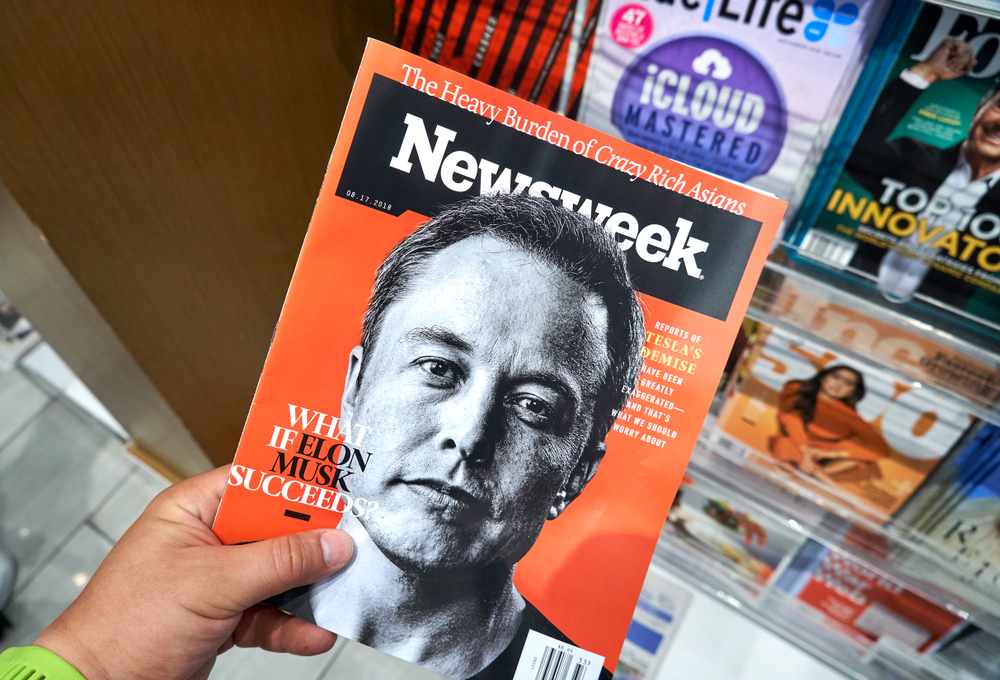 Elon Musk unveiled the 200-ton tin can he plans to send suckers to space in, Saturday night at the SpaceX launch facility in Texas.

Standing in front of what looks like a grain silo with a jet engine strapped to it, Elon said the stainless-steel rocket was just about “the most inspiring thing he’d ever seen.”

Reportedly, SpaceX designed Musk’s Stainless Starship for the express purpose of building a fleet of ships as quickly and affordably as possible. (And the company will pass on those savings/subsequent explosions directly to the customer.)

“The rate at which we will be building ships is going to be quite, quite crazy by space standards,” said Musk. (And barely squeaking by the most basic safety requirements by Earth standards.)

According to the Tesla CEO, the Starship is a “reusable rocket” designed to carry people into space, land safely back on Earth, and quickly fly again. (Which is great for the environment because sea turtles were choking on all those old one-use rockets.) 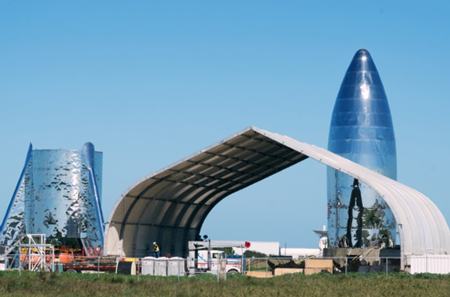 Our mission is to boldly go where no one has gone before… for as cheap as humanly possible.

(Editor’s note: Pictured is the unfinished Starship, snapped back in January of 2019. We could have bought the license for the photos from Saturday’s event but I’m not spending more money on photos of the rocket than Elon spent on building the darn thing.)

“This thing is going to take off, fly to about 65,000 feet — that’s about 20 kilometers — and come back and land. In about one to two months,” said Musk, who was dressed in his usual attire of a resort magician. “It is really gonna be pretty epic to see that thing take off and come back.”

The next step will be a redesign and building a new larger prototype of the Starship, capable of reaching orbit. According to Elon’s speech (which must always be taken with a bag of salt), SpaceX hopes to “reach orbit in less than six months” and put actual idiots in space within a year.

“We could potentially see people flying next year,” said Musk. (Presumably referring to his privately-owned space program but could just have easily been talking about some weird bird/human splicing project he’s invested in.)

The immediate goal of the Starship program is to open up space travel to private (incredibly wealthy) citizens. But Elon made it clear that this is the first step in his dream of building a self-sustaining city on Mars (where he can call himself the space duke and outlaw all space unions).

“The critical breakthrough that’s needed for us to become a space-faring civilization is to make space travel like air travel. With air travel, when you fly a plane, you fly it many times,” said Musk.

“Becoming a space-faring civilization, being out there among the stars, is one of the things that makes me glad to be alive.”

What do you folks think about all this living on Mars stuff? Do you see this happening in our lifetime? Would you fly in one of Musk’s budget tin cans?

If Elon said tomorrow, “There’s a Mars job with a six-figure Mars salary and a huge Mars house waiting for you on Mars,” would you go?

Click here to send me an email and we’ll discuss it in the comments this week.

Markets rose this morning after a U.S. Treasury official said the White House has no plans to ban Chinese companies from listing on domestic markets. (At this time. Maybe later. We’ll see. Ask your mother.)

Last Friday, while I was vacation-sealed in a news-proof bubble of Nicaraguan rum, Bloomberg reported that the White House has been discussing tactics to stop the influx of U.S. money into Chinese IPOs.

After Bloomberg bloom-blasted its bloom-news into the Friday news cycle, stocks declined, with the Dow finishing 0.3% down, the S&P 500 giving up 0.5%, and the Nasdaq Composite Index closing with a loss of 1.1%.

A day later, the Treasury Department responded to the report, stating that the White House isn’t considering blocking Chinese companies from “listing shares on U.S. stock exchanges at this time.” (And then the spokesperson winked and coyly put a finger to her lips.)

The markets rose as investors were reassured that there would be no immediate action taken this week. Because most investors are easily spooked and incapable of thinking ahead further than a week.

It’s not their fault though. As bestselling author James Altucher wrote in last week’s One Last Thing, investors are only human.

Human brains are vulnerable to “cognitive bias” which makes them terrible investors (and politicians and scientists and really we should all just be locked in a big box so we can’t mess our lives up).

That’s why James takes the human element out of trading. He writes computer programs that can spot “glitches” in the market and predict surges in stocks that make no sense to human eyes.

Computers, unlike humans, only see the data. They have no bias (and will never eat an entire extra-large Domino’s pizza in a single sitting).

Click here to see James’s “glitch spotter” in action and see how you could have used it to make a 524% gain in the span of a single week.

Forever 21 has filed for Chapter 11 bankruptcy protection, crushing the hopes and dreams of moms who dress like teenagers across the nation.

The sassy slogan crop-top dealer released a statement last night, saying the move was a positive step “to reorganize the business so we can return to profitability.” (Chapter Elevening is a “positive step” in the same way that having your car repossessed is an “opportunity for cardio.”)

“This was an important and necessary step to secure the future of our Company, which will enable us to reorganize our business and reposition Forever 21,” said Linda Chang, the company’s executive vice president.

Forever 21 (which might want to rebrand as “21 Until the End of 2020”) said in its statement that the company is not going out of business. But going forward it will be focusing “on maximizing the value of our U.S. footprint and shuttering certain international locations.”

The company will likely be pulling out of European and Asian markets. But a large number of Don’t You Wish You Were Still 21 stores within the U.S. also face closure.

According to the court filings, Forever 21 requested approval to close up to 178 of the company’s 549 stores across the U.S.

“We went from seven countries to 47 countries within a less-than-six-year time frame and with that came a lot of complexity,” said Ms. Chang in a statement. “The retail industry is obviously changing — there has been a softening of mall traffic and sales are shifting more to online.”

Forever 21 will maintain its e-commerce website where it sells its “ironic mom jeans” online. However, online sales make up just 16% of the company’s total revenue. And with e-commerce giants like Amazon breathing down your neck, the online space is more competitive than ever. 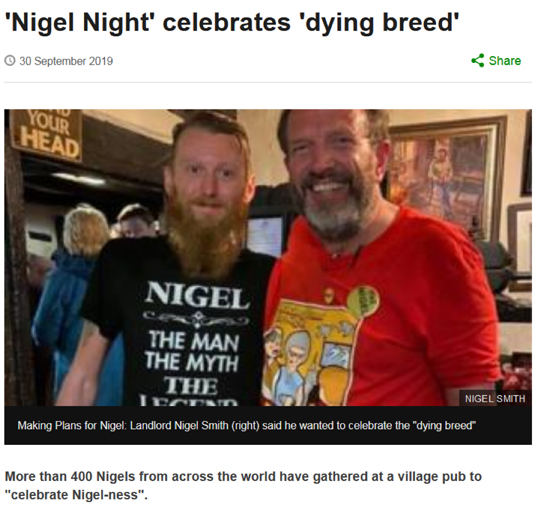 If you and your family are anything like mine, then a salary of $350k a year sounds pretty good.

Heck, my parents got by with a fraction of that (and I turned out only sort of terrible).

But according to research by Sam Dogen, aka the Financial Samurai, it’ll cost you about $350k a year to give your kids a basic middle-class lifestyle in our nation’s most expensive coastal cities.

(I would usually make fun of someone who calls themselves the “[literally anything] Samurai.” But since I’m going to be referencing Dogen’s research heavily here, he gets a free pass.)

Now, obviously if you’re chilling in Scottsbluff, Nebraska, these figures won’t reflect your day-to-day living. But Dogen estimates these figures to be roughly accurate for more than half the U.S. population who live in coastal hubs.

Dogen points out that while inflation has been rising steadily for decades, the median wealth of middle-income Americans has stayed flat for years, at about $87,140.

So your $87k today will buy you just a fraction of your parents $87k. Throw in the skyrocketing costs of housing and college tuition and a “middle-class” existence moves very far away from “the middle.”

“You can certainly live a middle-class lifestyle earning less, but it won’t be easy if your goal is to raise a family, save for your children’s education, save for your own home and save for retirement (so you can actually retire by a reasonable age),” he wrote in a post published on CNBC.

To support his theory, Dogen provided a rough budget for a family of four in a metropolitan area that would give Dave Ramsay a stroke: 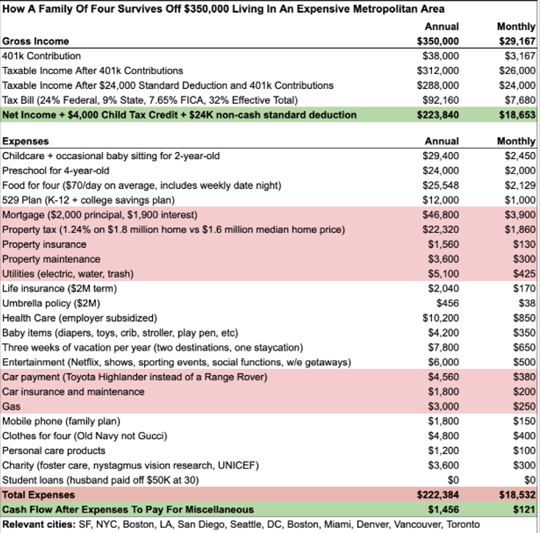 At the end of the year, the annual cash flow ends up being about $1,450, which makes for a paltry emergency fund. Throw in a couple of unexpected (but inevitable) expenses and you’re now at zero dollars.

“Unfortunately, despite making $350,000 a year, this couple will be unable to retire before 60 because they aren’t building an after-tax investment portfolio to generate passive income,” Dogen wrote. “In order for this couple to achieve financial​ ​independence, they need to accumulate a net worth equal to at least 25 times their annual expenses — or 20 times their annual gross income.”

Now obviously, this is something of an extreme example of a family living in an expensive city and may not reflect your situation. But it’s useful in that it exaggerates and highlights a problem that’s endemic across the U.S.: the cost of living rises every year, but paychecks aren’t keeping up.

Now, if you have a way to go out and magically fix the economy… well, I suggest you do it. But if you don’t, there’s only one way to stay ahead of the game.

As Dogen says (and we’ve been saying for years) you have to build “an after-tax investment portfolio to generate passive income.”

Or you could just “stop buying coffee” like certain financial gurus will tell you and see where you land in 20 years.