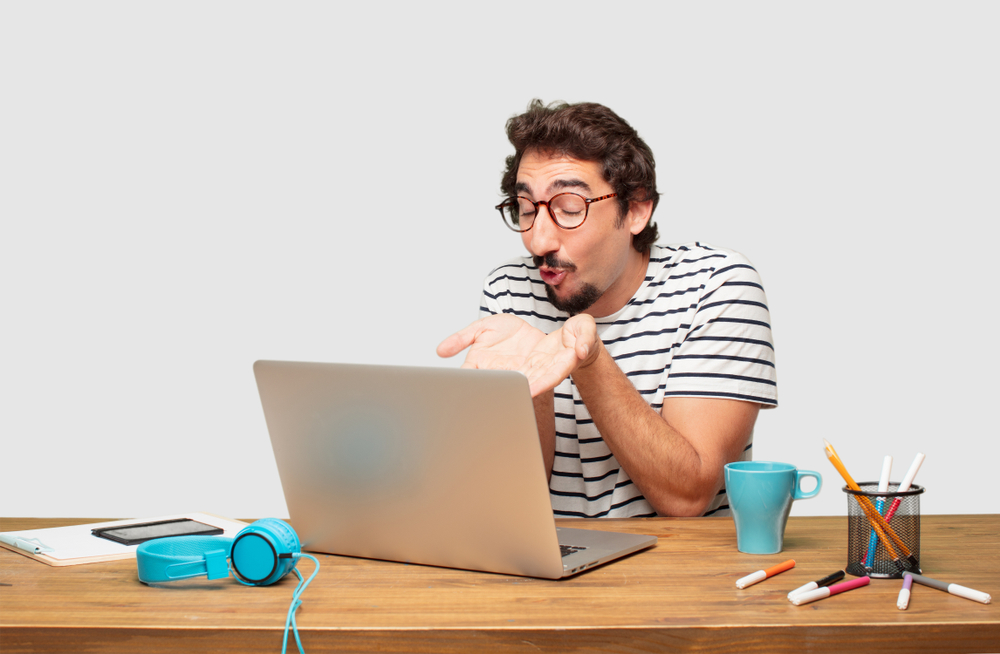 Wirecard’s freshly canned CEO, Markus Braun, was arrested yesterday, after a team of auditors found a $2.1 billion hole in the company’s balance sheet.

Braun’s arrest comes just days after he resigned in disgrace as the CEO of the German payments firm, amid accusations that the company inflated its value with some “creative” accounting. (Generally, I prefer not to do things “in disgrace” but I once ate a whole party-sized pizza and did not feel great about it after.)

Prosecutors in Munich say Braun was arrested on suspicion of telling porky pies and “inflating Wirecard AG’s sales volume with fake income” to the tune of €1.9 billion (or 2.1-billion real money).

Braun also stands accused of making the company more attractive to investors, like when Bugs Bunny would dress up as a pretty lady to mess with Elmer Fudd. 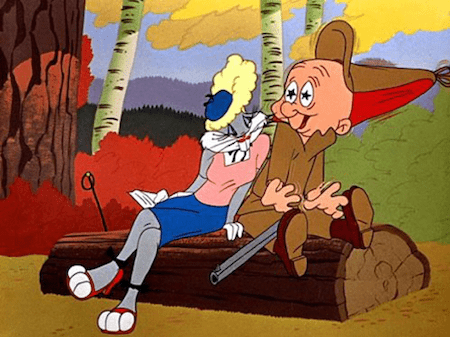 Bugs was doing top-tier drag a decade before Ru Paul was even born.

Braun served as Wirecard’s CEO for almost two decades before the whole “resigned in disgrace” thing. But given the enormous, Enron-esque hole in the company’s financials, it’s possible this funny business has been going on for years.

According to reporting from the Wall Street Journal, “the likely fictitious $2 billion is equivalent to all the net income Wirecard has reported over more than a decade.”

The company also dismissed Braun’s right-hand man, COO Jan Marsalek (which is great because when Adam McKay makes a movie about this, Braun’s character will have someone to bounce exposition off).

Wirecard’s shares (WDI) plummeted 90% over the past three trading sessions, but bounced a little this morning because at a certain point a bargain is a bargain (even if it has a $2.1 billion hole in it).

The former CEO’s bail was set at €5.7 million this morning and will be required to “check in” with the police weekly. (But you know he’s window shopping for former black-ops mercenaries to smuggle him out of the country as we speak.)

Canva, an online design platform aimed at dingdongs who don’t know nuthin’ bout no design, has just closed a $600 million funding round, according to the company.

In total, the Sydney-based startup has raised more than $300 million for its idiot-proof graphic design program, with the latest round of funding bringing the company’s valuation to a very chill $6 billion.

Canva COO and Co-Founder Cliff Obrecht told the dorkos at TechCrunch the funding round was 10x oversubscribed but the company resisted the urge to take all that and build something stupid with it.

“At our stage, investors are looking to deploy $50 million+ in capital,” said Obrecht told TechCrunch.

“Even our existing investors were looking to deploy between $50 million and $100 million, but we said ‘Oh, gee, we really don’t want to be diluted that much because we have a lot of conviction in the business and we don’t need that much money.’”

Canva is one of those rare companies that has actually benefited from everyone staying inside and being on their computers all day.

The platform’s tools are designed to make graphic design easy for folks that very much suck at graphic design, opting for a simple drag-and-drop interface instead of the kitchen sink-approach of programs like Photoshop and InDesign.

Since the end of the world kicked off in March, the company says it’s seen a 50% uptick in shared designs, and a 25% increase in designs created each month. Overall, Canva is growing 100% year-over-year in both revenue and dingdongs.

American Whiskey Exports to EU Down 33%

American whiskey distillers have been caught in the crossfire of an ongoing trade dispute between the Trump administration and the European Union, missing out on over $300 million in European sales.

Exports of delicious American whiskey to ungrateful and aloof Europeans has declined 33% since the beginning of this whole trade kerfuffle began two years ago, according to a report released by the Distilled Spirits Council of the United States. (Not to be confused with the Still Spirits Council who represent ghosts with unfinished business stuck on this earthly plane.)

The folks over at the European Union (which is like the UN but they serve wine with every meal) imposed the retaliatory tariffs on beautiful, innocent whiskey distilleries in response to steal and aluminum tariffs levied by the Trump administration.

American whiskey exports exploded in the last two decades, surging from $143 million in the late 90s to more than $750 million in 2018. Since the tariffs hit two years ago, that number has slid back down to $501 million.

“American distillers enjoyed two decades of unparalleled growth in the EU prior to the implementation of these retaliatory tariffs. This report makes clear that these tariffs took the wind out of the sails for American Whiskey exports to our top export market.”

Strategic Investing in a Volatile System

In yesterday’s one last thing, Graham Summers showed that there’s little to no correlation between the stock market and the economy.

It’s as clear as day to anyone with a pair of eyes, but how does a disconnect happen? And how can investors make money from it?

Graham Summers has the story in today’s one last thing.

There are two major reasons that stocks are exploding higher despite the economic downturn.

This money has to go somewhere. And some of it is flowing into the stock market.

Interest rates are at zero, so bonds are offering little if any yield. So investors need to pursue riskier asset classes (stocks) to produce significant returns.

Second, fund managers/institutions are putting capital to work in the markets.

By law, many investment funds and institutions are required to have a percentage of capital allocated into stocks. Put another way, unless there’s a full-scale crisis underway, these groups HAVE to buy stocks.

After all, the investors who entrusted these managers and institutions with their capital aren’t paying them to sit on cash!

So these groups are buying stocks. And they are concentrating on growth stocks.

Strategic Investing in a Volatile System

Take a look at Chewy.com (CHWY).

Pet care is one of the few recession-proof industries in the US.

Overall, pet spending rose during both the 2001 and the 2008 recessions. And CHWY is a pure play on this – tailored for an environment in which consumers want to take care of their pets without going to an actual store.

With that in mind, consider that CHWY’s revenues have more than tripled from $900 million in 2016 to $4.85 billion in the last 12 months. Because of this, CHWY shares actually ROSE during the COVID-19 shutdown. 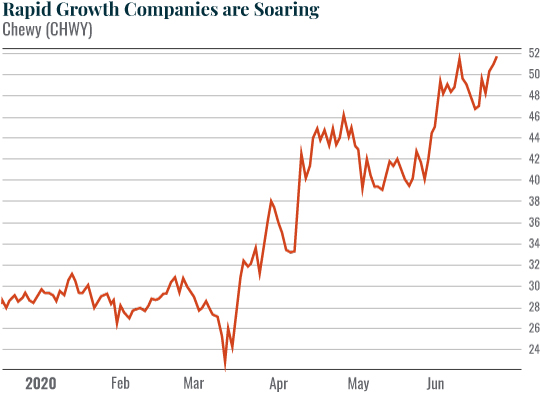 I recommended CHWY to subscribers of my Strategic Impact newsletter and the stock has shown strength since.

And that’s how you see outsized returns from the market.