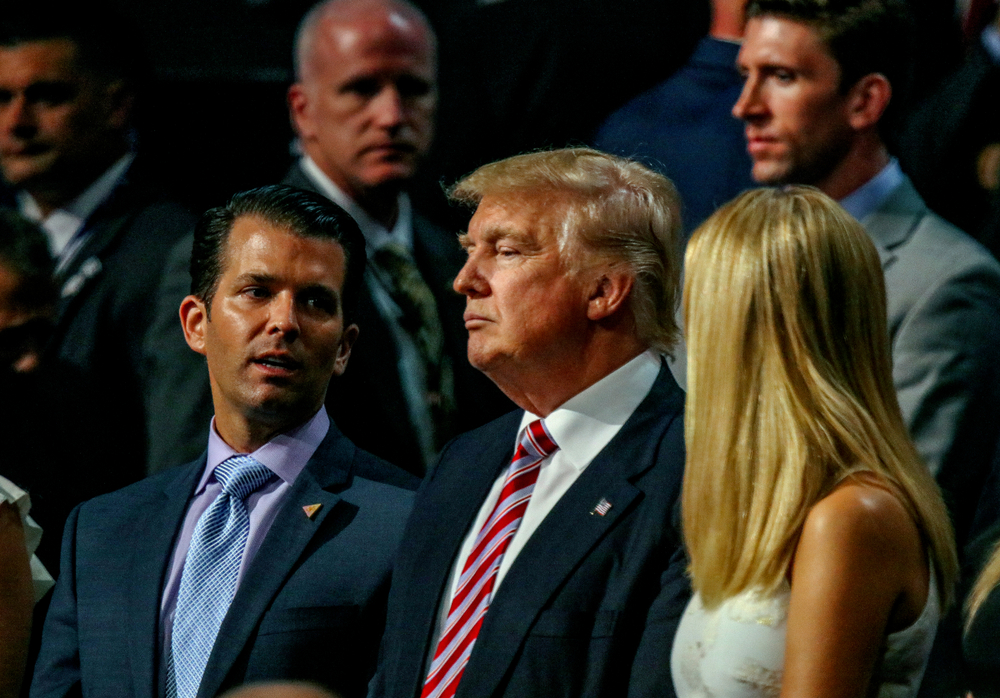 Don Jr. Headed for the Senate

McConnell Struggles to Wrangle the GOP

According to Politico, Jr.’s lawyers went as far as to draft a letter to Burr but it was never sent. (Don’t you hate it when you forget to send an email and it just sits in your outbox and then Politico finds it and publishes it on the internet?)

The deadline for Trump Jr.’s camp to respond was Monday at 5 pm. But the committee gave Don an extra 24 hours to make his decision and negotiate the terms of the testimony.

The Senate Intelligence Committee is a Republican-led panel. But some Republicans, the president included, feel that the time for all this subpoena nonsense ended with the completion of the Mueller report.

South Carolina senator and haunted doll Lindsey Graham caught some GOP flack over the weekend for going on Fox Business and suggesting Jr. ignore the subpoena.

“If I were Donald Trump Jr.’s lawyer I would tell him, ‘You don’t need to go back into this environment anymore, you’ve been there for hours and hours and hours. And nothing being alleged here changes the outcome of the Mueller investigation,’” Graham said. “I would call it a day.”

If you use Twitter, you might have noticed that the tiny senator was trending on the social media platform yesterday. (It’s never good to be trending on Twitter.)

Since then, #LindseyGrahamResign was tweeted by more than 65,000 users after a Democratic super PAC urged supporters to tweet it. 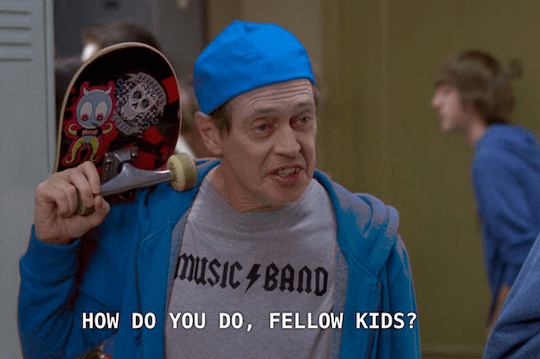 File footage of a Dem super PAC trying to get a hashtag trending on Twitter.

Republicans were worried that Don’s refusal to appear before the committee would be a slap in the face to the Republican-controlled Senate.

But at the last minute, Senate Majority Leader and last living member of the California Raisins Mitch McConnell put his foot down and signaled his support for Burr’s subpoena.

“None of us tell Chairman Burr how to run his committee,” McConnell told reporters yesterday. “I asked him to undertake this investigation with Russian collusion a couple of years ago. He’s indicated publicly that he believes they will find no collusion.”

Not long after that, Jr.’s camp agreed to testify. He’ll be interviewed behind closed doors for an hour period in mid-June.

What do you think? Is this subpoena a waste of time? Or is the GOP undermining its own power in the Senate?

Risk Hedge is holding its American Disruption Summit, and they’ve extended a free invite to readers of One Last Thing.

This emergency summit is being held to discuss disruptive market forces that investors need to be aware of.

What is disruptive tech? Disruptive tech is an innovation that shakes up industries. Some folks will lose a lot of money as a result. But those who back these disruptive force stand to make a fortune.

Risk Hedge has gathered four leading experts on predicting tech disrupters for the American Disruption Summit — including the “prophet” of predicting mega trends George Gilder. (George actually predicted the iPhone all the way back in 1990. Whereas I have troubling predicting what I’m going to have for dinner tonight.)

After the summit, Risk Hedge’s chief investment officer, Chris Wood, is going to tell you all about a “disruptor” stock pick that’s set to soar 500%, no charge and no strings attached.

Over the last 15 years, Chris has developed a formula that reliably finds these kinds of stocks before they achieve massive gains.

This formula helped him spot Amazon (AMZN) way back in March 2012, when nobody knew it was going to take over the world. His readers who got in and held on have earned a whopping 722%.

And his team picked out Google (GOOG) back in 2012 too, years before it grew into one of the most profitable companies on earth.

Although these gains are substantial, they’re small potatoes compared to some other examples. As Chris is quick to point out, disruptors (like this one) routinely see 5,000% profits or better.

Click here now for free access to the American Disruption Summit and get in on the ground floor of the biggest disruptive trend in history.

Study: News is Less Fact-Based Than it’s Ever Been

According to a study conducted by the RAND Corporation, U.S. news has made a dramatic shift from fact-based reporting to opinion-based content that appeals to emotion. (This makes me very emotional and I have opinions about it.)

Between 1989 and 2017, the role of facts and analysis in news has been replaced by a parade of ding dongs “debating” the news.

“Our research provides quantitative evidence for what we all can see in the media landscape,” said Jennifer Kavanagh, lead author of the report. Journalism in the U.S. has become more subjective and consists less of the detailed event- or context-based reporting that used to characterize news coverage.”

RAND used a neat little analytics tool developed to worm out Islamic terrorists on social media. With this tool, researchers could scan millions of lines of text in print, broadcast, and online journalism for biased or opinion-based language.

According to the report’s authors, the shift to a “more subjective” form of journalism (which used to be known as “not journalism”) was tied to the development of new media like the 24-hour news channel and online news.

At first, the erosion of facts was slow and gradual but took a sharp nosedive in the year 2000. (Which would have coincided with the rolling out of broadband and access to high-speed internet.)

The shift in bias was observed across the board. But according to the researchers, the effect was not as dramatic in traditional newspapers. (Which restates the role of TV and online media in the shift.)

If you’re concerned about bias in your news check out the media bias chart, which was developed by patent attorney Vanessa Otero.

The Associated Press and Reuters come out on top (which is unsurprising considering their reporting is drier than the inside of Marco Rubio’s mouth) with everything below them sliding into opinion and veering further left or right. 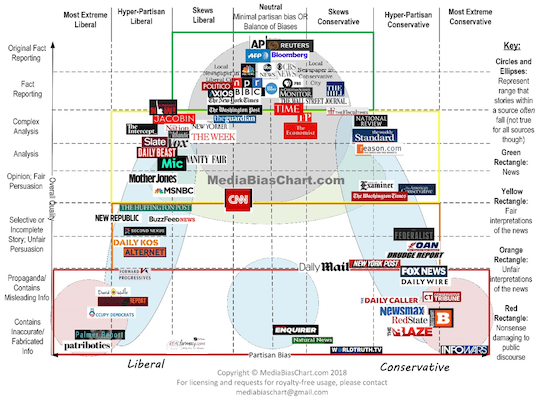 Of course, none of this matters if the chart itself is biased.

Do you agree with the RAND report? What about the media Bias Chart? I predict some folks will have some strong emotional opinions about it… and I for one want to hear them.

I was right (it happens every so often) but little did I know it would be so close to home.

One of the primary targets affected by the attack was the city of Baltimore (which is where I live and keep all my stuff).

Every computer in Baltimore city government was infected. And now, the city is in a stalemate with hackers who are demanding more than $75,000 in bitcoin as ransom. (Incidentally, if they had paid that ransom last week, those bitcoins would be worth about $110,000 today.)

One unforeseen consequence of the hack is the impact it’s having on the local real estate industry. Without the government computers to finalize the deals, folks are unable to sell or buy real estate.

In fact, Chris (a member of our crack email team) was due to close on a house with his fiancé yesterday.

I walked all the way upstairs to get a quote:

“Essentially, the title company can’t check the cities records and finalize our closing details,” says Chris. “It’s pretty frustrating considering our home buying experience has been a bit of a challenge to begin with. While we understand that the city didn’t ask to be hacked — and I personally find it hard to blame anyone involved for the delay — it doesn’t prevent me from over all being disappointed.”

The city says it’s working on a solution. But for now, more than 1,500 real estate sales are pending in Baltimore.

Earlier this week we reported on Facebook co-founder Chris Hughes call to “break up Facebook.” I asked you what you think should be done… and this seems to be one issue where everybody is on the same side:

My opinion is it should be broke up. [Zuckerberg] has way too much control of it. Now you can’t go on facebook and get to other people around the world without paying for it. Especially if you have a product you what to offer to sell on your website. Way too much power for one man. Our country has turned into nothing but a greed country. Both sides of the fence. — Chuck

Unfortunately I agree something must be done. Facebook is a monopoly that keeps competition at bay which is not good. Zuckerberg’s feeble solution of 40 board members making decisions for millions of users is laughable. I give him credit for what he has created out of nothing, which should inspire us all, but choking competition is not the American way. I don’t profess to know the answer, but I do know something must be done. — Kathy k.

Break it up! I call it fake book because that’s what it is. Yeah don’t get me wrong you can keep connected to people from your past. So what? How about keeping connected to people you’re around and nurture those real relationships in the now. If you want to keep connected to family and friends how about writing a letter that’s real not as mass message to all your friends and family. I could go on and on and the cons far more out weigh the pros. This is just my personal opinion. Thanks. — Alan J.

I’d say I agree, Alan… except I just so happen to be one of those people who emails thousands of people every day. (But I think of you guys as family, of course *cough cough cough*)

Until tomorrow, One Last Thing family.