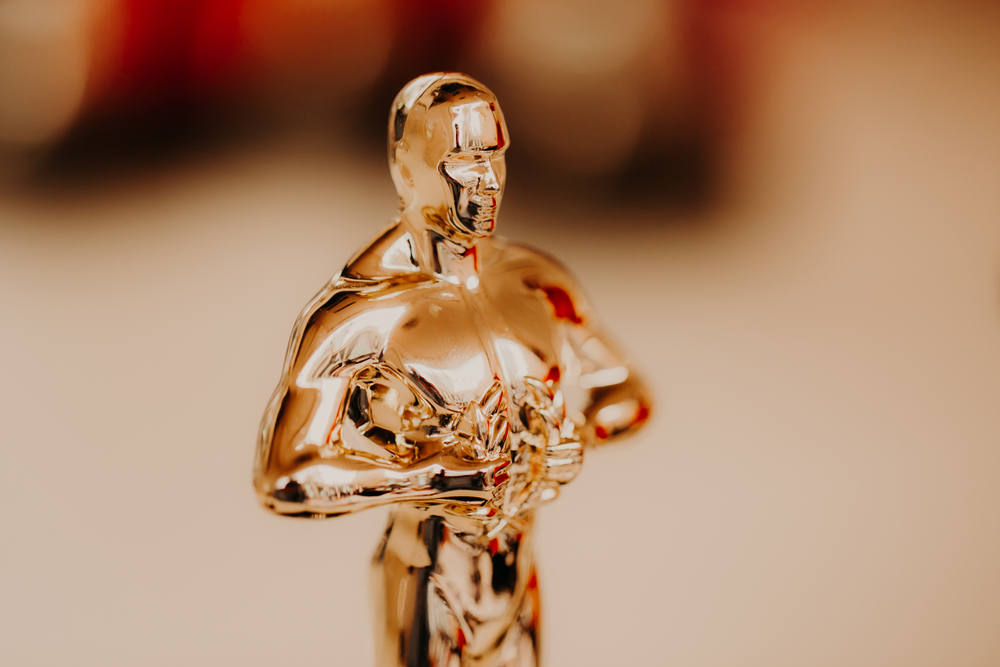 The Oscars Are in Danger of Violating Antitrust Law

The Department of Justice has issued a warning to the Academy of Motion Picture Arts and Sciences:

Any attempt to ban Netflix from competing in the Oscars could violate U.S. Antitrust law. Also, Green Book was fun but it shouldn’t have won Best Picture. (I may have added that last bit… please don’t email me about Green Book.)

Apparently, the federal authorities have been paying close attention to the Academy’s attempts to bar Netflix and other streaming services from competing in the Oscars.

According to the letter, any attempt to do so would violate antitrust law because many of the members of the Academy are in direct competition with Netflix.

Trust me: Antitrust laws were first enacted to break up huge manufacturing conglomerations, known as “trusts,” that crushed all U.S. competition. One of the first giants felled by antitrust law was John D. Rockefeller’s Standard Oil Company.

Netflix walked away from this year’s awards with four Oscars, including Best Cinematography, Best Director, and Best Foreign Language Film for Alfonso Cuarón’s Roma. (No I haven’t seen it. Please don’t email me about Roma.)

Netflix’s game plan for its movie division has always been to shoot for same-day release in theatres and on streaming. But they’ve been fighting an uphill battle on that front.

According to certain high-profile members of the Academy, if it ain’t exclusive to theatres, it ain’t cinema.

Steven Spielberg has been the most vocal A-list celebrity to come to the defense of the sanctity of the Oscars (an award show that’s sole purpose is to allow the Hollywood elite to clap themselves on the back for another year of passable popcorn flicks).

A spokesperson for King Steven told IndieWire that “Steven feels strongly about the difference between the streaming and theatrical situation. He’ll be happy if the others will join (his campaign) when that comes up. He will see what happens.”

Netflix’s response, which went viral, is likely what drew the DOJ’s attention to the Academy in the first place: 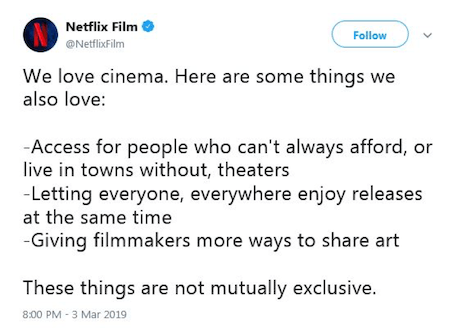 “Steven Spielberg was the bad guy all along” was the twist I did not see coming.

To get Roma into the Oscars this year, Netflix made some concessions and gave the movie a three-week exclusive run in theatres. But Roma’s hat-trick win put the wind up the skirts of certain members of the academy (*cough* movie studios *cough*).

Rumors have started circulating that, from next year on, the Academy will require all entrants to have a three-month exclusive run in theatres.

If the streaming service is forced to give theatres a three-month lead time, they’re just going to stop competing in the Oscars.

According to Makan Delrahim, the DOJ’s antitrust division’s assistant attorney general, members of the Academy are using their power to crush the competition and that would potentially violate U.S. antitrust law.

“In the event that the Academy — an association that includes multiple competitors in its membership — establishes certain eligibility requirements for the Oscars that eliminate competition without pro-competitive justification, such conduct may raise antitrust concerns,” wrote Delrahim.

“If the Academy adopts a new rule to exclude certain types of films, such as films distributed via online streaming services, from eligibility for the Oscars, and that exclusion tends to diminish the excluded films’ sales, that rule could therefore violate Section 1.”

(Do you think Netflix should be allowed to compete? Or should they have to toe the line like everybody else? Click here to stream me your award-winning thoughts.)

Batting away the seagulls while a shark chews on your leg…

Now, U.S. anti-trust laws are notoriously hard to enforce. But increased attention from the DOJ will certainly make the Oscars think twice about any plans it might have to “f**k with Netflix.”

Netflix’s (NASDAQ: NFLX) stock rose about 1% this morning following the news of Delrahim’s letter. But the Oscars is the least of Netflix’s worries right now.

According to our tech trends expert James Altucher, Netflix is already struggling to contend with a new streaming alternative that came out of nowhere in the last year or two.

According to Netflix’s most recent shareholder’s report, they “compete with, and lose to, [this streaming alternative] more than HBO.”

It’s taken Netflix years to build its viewer base of 139 million users. But astonishingly, in less than a year, this streaming alternative has exploded to more than 200 million users.

“A whole new generation of millionaires will be minted from the vast opportunities and growth in this industry,” says James.

“Already, we’re seeing celebrity personalities with marketing deals, content deals, merchandise and more. And there’s additional money to be made by event organizers, bookmakers, talent agents and all the supporting legal, marketing and accounting service providers.

“Most importantly, since this market is still in its infancy, the opportunities to get in at the bottom are countless.”

But maybe not for long. James anticipates an announcement for a major corporation any day now, powering massive gains for a smaller business partner.

“This little-known company could deliver fast movers a shot at a $1.9 million payday,” says James.

Click here now and James will show you exactly how to play this potentially life-changing opportunity.

A Chinese woman lugging a grab bag full of spy gear slipped past Secret Service agents at the Mar-a-Lago resort on Saturday.

And she would have gotten away with it too, if it wasn’t for that pesky receptionist.

The woman, who was identified in a federal complaint as Yujing Zhang, was carrying:

Zhang convinced club security to let her into the Palm Beach resort by telling them her father was a member. (James Bond used to play the “my daddy” card all the time.)

Once inside the club, Zhang was picked up by a helpful lad in a golf cart, who drove her past three Secret Service checkpoints. (Truly, this woman is one of the best.)

Fortunately, the Mar-a-Lago receptionist is a little more discerning than your average Secret Service agent.

When the receptionist asked Zhang why she was visiting the club, Zhang said she was attending a United Nations Chinese-American Event — an event that does not exist. (I’m starting to reconsider my assessment of this woman as a master spy.)

The receptionist (AKA The Gatekeeper of our Nation’s Secrets) had Zhang escorted from the club, after which she was detained and questioned by Secret Service.

Zhang told agents that her friend “Charles” had instructed her to travel from Shanghai to the Mar-a-Lago resort at Palm Beach to talk to a member of Trump’s family about mending U.S.-China trade relations. (The malware is for something else. Don’t worry about it.)

Zhang said she had spoken with this mysterious Charles exclusively through WeChat, a Chinese instant messaging service similar to WhatsApp.

According to the federal complaint, agents were unable to identify the existence or identity of Charles. 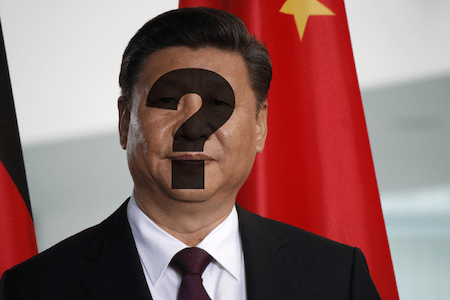 Who could this mysterious “Charles” be?

Do you think she a legitimate Chinese spy? The victim of a con? Or something else entirely?

Click here and tell us if you think Zhang is a Black Widow… or a Red Herring?

50 Cent Sells His Home for Pennies on the Dollar

Rapper 50 Cent has finally sold that monstrous Connecticut mansion he’s been trying to offload for more than a decade.

The 52-room temple of excess sold for a fraction of the original asking price, selling at an 84% drop for just $2.9 million.

What your $2.9 million will get you in Farmington, Connecticut:

Of course, Fiddy is entitled to spend his money how he likes. But you have to question the decision to buy a 52-room compound just outside the cozy town of Farmington, Connecticut.

I’m not saying there’s anything wrong with Connecticut (I am a hamburger man after all). But what was it about Hartford County’s “Mother Town” (it’s actually called that. I looked it up) that screams “party compound” to Fifty?

No one is more surprised about the sale than the legendary rap artist himself. In a post on Instagram, Mr. Cent said that it’s been so long, he forgot that he still owned that “MF.”

Fifty bought the home from famously stable genius Mike Tyson in 2003 for $4.1 million (now this story is starting to make some sense) and it’s hung around his neck like a 52-room albatross ever since.

In a recent interview on the Late Show, 50 Cent revealed the not-so-glamorous side of owning a superstar mansion:

You know when you look down the hallway in your house and you don’t wanna go down there? Things would break because you didn’t use it. You didn’t turn it on, now the light is flickering.

A Band-Aid for a Crisis

In response to the impending retirement crisis, the embarrassingly named Ways and Means Committee passed a bill to upgrade the 401(k).

This bipartisan bill, known as the Secure Pact, aims to increase flexibility and improve access to retirement benefits (though it’s little more than a band-aid for those who will be affected the worst by the crisis).

“Americans currently face a retirement income crisis, with too many people in danger of not having enough in retirement to maintain their standard of living and avoid sliding into poverty,” said committee Chairman Richard Neal yesterday.

“The Ways and Means committee is where we find solutions and get things done for the American people.”

The Secure Pact contains a host of provisions to “encourage” small business to provide retirement benefits to workers.

The Pact is backed by top Dems and Republicans, making it one of the few bills in play that actually has a chance of being passed in Congress.

It’s encouraging that our politicians have actually acknowledged the impending retirement crisis. But for many folks, it’s too little too late.

This bill will help young people and future generations employed by small businesses start saving for retirement. But for those in their forties, fifties, and sixties who don’t have enough money for retirement, it’s too little too late.

If you’ve been reading One Last Thing, you already know that my research team has been working on a solution to build retirement funds fast, to help the people that need it most.

I’ll have more information tomorrow. And I’m confident we’ll be able to reveal all the exciting details before the end of the week.

Yesterday, I asked you if you thought it was time for another bitcoin bull run. And I have to say I was not expecting some of the answers I got:

Bitcoin will definitely surpass $20,000 in the next couple of years if not this year. As companies like Nasdaq and fidelity flock to Cryptocurrency & banks all over the world migrate towards Ecurrencys. $20,000 is a baby number, we broke that on speculation. The “big boys” are on the way. 😎— Zay W.

I think some of our readers are hanging on their bitcoin (I might be as well). Also one of our readers had a wild theory why bitcoin surged yesterday. I haven’t seen this idea anywhere else, so I had to pass it on:

You may not believe me on this but it’s the facts. The rapper Nipsey Hussle passing away had a lot to do with this start of the bull run. Millionaire rappers from all over who respected him believe in his vision as his brother Chris stated the reason they moved to Amsterdam was because they were crypto friendly. — Zay W.

R.I.P. Nipsey. This bull run is yours.