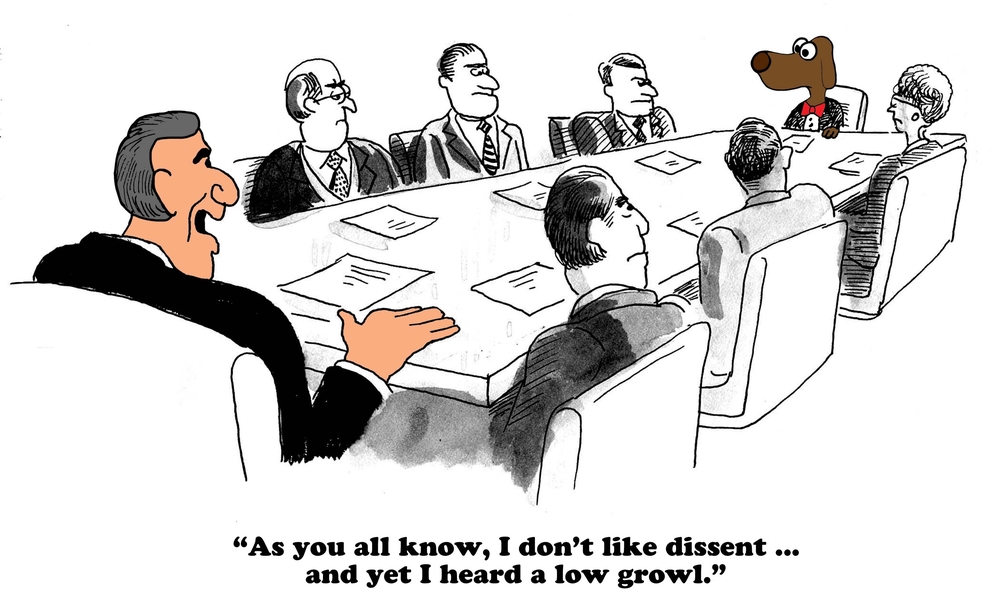 Hundreds of Chinese goods will be exempt from tariffs this holiday season, according to three notices filed by the U.S. gov today.

Among the items exempt from the tariffs on more than $250 billion of Chinese goods will be Christmas lights, plastic straws, and electric skateboards from tariffs.

(Ho, ho, ho. It’s not Christmas without electric kickflips and plastic straws for hot drinks with too much cinnamon in them.)

Other products on the list of exclusions include single-speed bikes (for the dorks), water drinking fountains for pets (for the borks), and tiki torches (for the moms with nice gardens and marching white nationalists).

The Trump administration’s adjustment comes just ahead of a new round of negotiations scheduled to take place in early October. But this move isn’t for the benefit of China or the negotiations.

Judging by the items on this list, these exemptions are aimed at giving relief to American consumers and businesses this holiday season.

According to a quarterly report released by the U.S. Chamber of Commerce yesterday, 40% of midsize company leaders say Trump’s tariffs are posing challenges for their businesses. (Clarification: the companies themselves are midsize. The leaders themselves are all different shapes and sizes.)

“To guard against a possible recession, policymakers need to restore economic certainty, and that means deescalating trade tensions with China, passing [the U.S.-Mexico-Canada Agreement] and investing in the future through an infrastructure package.”

The documents (which were made public as I was writing this story) reveal that U.S. companies filed for the exemptions and that United States Trade Representative and head full of teeth Robert Lighthizer granted many of those requests.

The markets opened strong on the news of the further de-escalation of trade talks (and cheap electric skateboards, my dudes) this morning.

That said, I expect to see some volatility before the day is out. Today is the notorious quadruple witching day, when contracts for stock index futures, stock index options, stock options, and single stock futures all expire at once.

(And some folks take psychedelic drugs and dance naked under the moon, but that’s none of my business.) 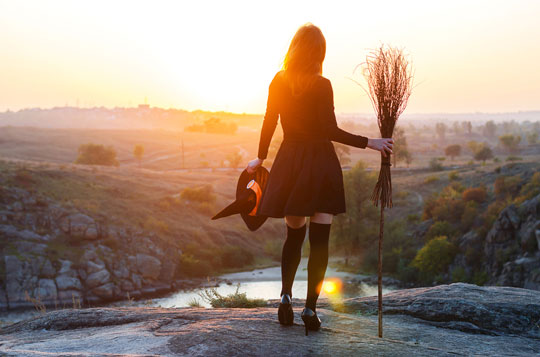 A mysterious illness affecting hundreds of vapers (AKA Vape Lords, AKA Cotton Rippers, AKA Vaping Americans) may be linked to an online black market for counterfeit vape products.

So far, the CDC has identified 530 cases of a mysterious vaping-associated lung disease. (Which is kind of a kick in the ass to all those smokers who switched to electric nerd sticks “to be healthy.”)

With the announcement of yet another death in Missouri yesterday, the death toll for the disease is now at eight people.

It’s unclear exactly where the disease is coming from right now. But scientists are pointing the finger at a social media black market for counterfeit vaping products. (That’s probably the single most 2019 sentence I ever wrote.)

Of course, it’s illegal to sell vaping products on Facebook, Instagram, and Amazon. But some genius idiots have been able to sidestep the rules by labeling the counterfeit goods as other electronic products like “Apple air pods” or video game consoles. 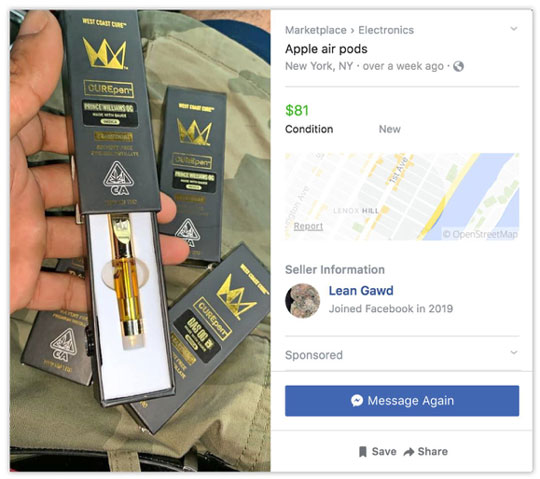 I hope Lean Gawd has a gawd lawyer.

These counterfeit products may look exactly like the ones you’d find in stores. But according to California-based testing lab CannaSafe, the black market products don’t adhere to state regulations and contain potentially deadly additives.

Aaron Riley, CannaSafe’s president, says that as many as 35% of black market THC vape cartridges test positive for vitamin E (which can be deadly when inhaled) and pesticides (which, as you can probably imagine, do not belong in your body at all).

The FDA is currently conducting a criminal probe into the mysterious illness.

A spokesperson for the FDA refused to confirm whether or not they are looking at online sellers. But the CDC has issued a statement warning vapers not to buy from unlicensed sellers.

In case you missed the hot goss coming out of the Federal Reserve yesterday, the committee voted 7-3 to trim rates by a quarter percentage point.

Two Fed presidents voted to stay the course and maintain rates as they were. But old James “Wild Card” Bullard voted for a more aggressive half-point cut, due to signs of a slowing economy (and signs of an increasingly frustrated president).

In a statement released this morning, Bullard said the half-point rate cut would have cushioned the slow economic growth and helped move inflation back up to 2%.

“Trade policy uncertainty remains elevated, U.S. manufacturing already appears in recession and many estimates of recession probabilities have risen from low to moderate levels,” said Bullard, gently reminding everyone that there’s a lot of screwy stuff going on in the economy right now.

Despite his dissenting vote, Bullard said that he remains confident in the Fed’s decision making. But he added that if the committee took more aggressive action they could always go back and hike rates later if it doesn’t pan out.

“It is prudent risk management, in my view, to cut the policy rate aggressively now and then later increase it should the downside risks not materialize,” said Bullard.

“At the same time, a 50 basis point cut at this time would help promote a more rapid return of inflation and inflation expectations to target.”

The Flight of the Black Bevvy

(You can read Part One here.)

But at the end of yesterday’s issue, I hinted that the next Black Swan might not be a Black Swan at all.

It could be a Black Bevvy.

What’s a Bevvy I hear you ask? It’s a group of swans. (I know this because I looked it up for this story.)

A Black Bevvy is a group of minor catastrophes (little black swans if you will) that a robust market might otherwise survive. But when taken together, they snowball into a rolling ball of catastrophe (like a big Black Swan made up of smaller cuter Black Swans).

And right now, the bevvy is circling… or flying in a V… or whatever swans do.

As TD Ameritrade’s Oliver Renick said in a post on LinkedIn last week: “What’s disconcerting is that it’s remarkably easy to imagine a series of events that by nature should not necessarily pose great risk, but taken together could cause some major shocks to the S&P 500 due to current investor positioning.”

Renick pointed to this SocGen graph he vandalized to make his point: 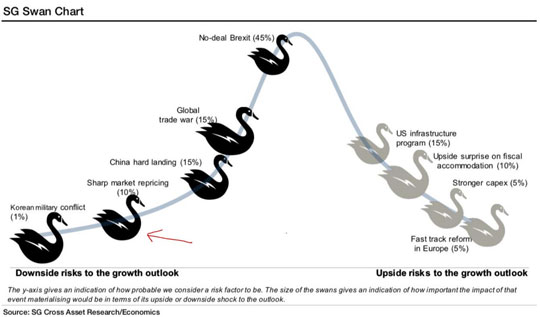 “A sharp market repricing should be the fattest swan on that diagram,” says Renick. “The greatest risk to investors, the economy, and the tenuous state of geopolitics, is the price of the S&P 500. That does not mean it is the most likely risk — what it means is that the ripple effect of a sizable selloff in stocks right now is monstrous.”

According to Renick, that ripple could start if the Fed decides not to cut rates. Investors will get spooked, assets will pull back, and the bottom will fall out of the market.

“If no one’s there to buy because they’ve already bought, hedges don’t work because they’re all tied to the same events, liquidity exacerbates swings and the president realizes his cow-prod is on the verge of breaking, watch out below.”

And that’s just one swan in the Bevvy. Our analysts will be watching this situation closely.