The House of Mouse reported a $4.72 billion loss last quarter, as almost every one of its revenue streams had its ass kicked by the ‘rona.

Around the time the deadly pandemic killing thousands of Americans became something we were vaguely concerned about, movie distribution was halted, theme parks were closed, and live sports events (which Disney holds the broadcasting rights to) were cancelled.

Disney’s theme parks (the happiest place on earth for kids and airborne viruses) took the heaviest hit, rounding out the quarter at a $1.96 billion loss.

Disney World managed to reopen its doors last month as states relaxed lockdown measures, but the number of people who want to go to a theme park during a pandemic has been “disappointing,” says Finance Chief Christine M. McCarthy.

“The upside we are seeing from reopening is less than we originally expected given the recent surge in Covid-19 cases in Florida,” said McCarthy on Tuesday’s earnings call.

On the relatively bright side, with everyone trapped indoors because of a deadly virus, subscriptions to Disney’s new streaming platform exploded.

In the nine months since the Netflix knockoff launched, Disney+ has added 60 million users, a feat that took Netflix eight years. Going forward, the company’s going to try and leverage this instant audience to solve its movie distribution problem.

During its single worst quarterly report ever, Disney announced the upcoming release of the long-delayed live-action remake of Mulan.

The company plans to circumvent a theatre release and make the film available through Disney+ for an additional $30 rental fee. (Now you can get price-gouged in the comfort of your own home.)

This was more than enough for investors, who flocked to the mouse’s stock (DIS) when the markets opened this morning, driving it up more than 10%. But even with this sudden surge, the company’s stock is down 10.5% year to date.

The last time the House of Mouse reported a loss was back in 2001, when a post-9/11 America didn’t feel like getting their picture taken with a dehydrated teenager in 50-pound mouse costume. (Max Keeble’s Big Move definitely didn’t help either.)

I’m going to tell my kids this is The Wire. (Source: Max Keeble’s Big Move.)

Games like TheOne Where You Shoot Things and The One Where You’re a Wizard and All Your Friends Are There saw a significant increase in engagement last quarter.

Meanwhile, the company’s rapidly growing mobile segment saw a monthly increase in users and ad revenue, a notable accomplishment at a time when nobody is buying ads.

The company noted a dropoff in users towards the end of the quarter, as gamers started to realize that no amount of sexy 3D women and digital candy could fill the gaping hole in their soul.

Activision Blizzard’s blockbuster report was released amid fresh accusations that the company underpays the vast majority of its staff.

Employees circulated a spreadsheet exposing their low salaries and accused the bosses of hoarding all the wealth at the top of the company. Some employees said they used free office coffee as an appetite suppressant and had to skip meals just to make ends meet.

Shares of Activision Blizzard (ATVI) rose 7% yesterday amid all that good news and are up more than 45% year to date.

At least 135 people were killed in a massive explosion in Beirut, Lebanon yesterday.

The blast, captured by dozens of onlookers with their smart phones, originated in a warehouse in the city’s port.

Around 6pm, a devastating shockwave generated by a secondary explosion ripped through the city, shattering windows and tearing balconies off buildings. 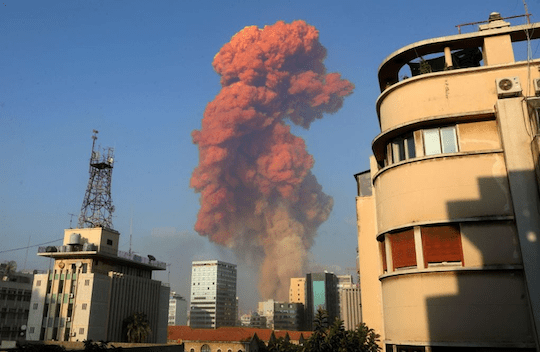 Folks living in Beirut took to social media to share videos of the blast and the subsequent destruction, with many believing the damage was caused by airborne missile strike.

It later emerged, however, the explosion was started by a cache of ammonium nitrate that had be improperly stored in a port warehouse. A spark from a blow torch ignited the cache which exploded and triggered a chain reaction, resulting in the much larger second explosion.

At time of writing, the death toll stands at 135 people with more than 5,000 injured. According to local authorities, the damage from the blast extended over half of the city, causing an estimated $3 billion in damage.

Life is pretty hard. And it’s Every. Single. Day.

Most days I have a little bit of fear in me.

I get worried for my children. I think to myself, “What is going on in their heads right now?” and I hope it’s OK.

I’d hate to think I gave birth to someone who is now in pain.

I have fear that bad things can happen to me or people I love.

I have fear that things I work hard on will not work out in the end. They say “it’s the journey” and this is good advice also but if the journey is hard I want to make sure there is some comfort at the destination.

I have fear that people will dislike me for no reason. I try hard to please people and I’ve seen too many times where the harder you try to be a good person, sometimes the result is even worse.

Sometimes I think, “What am I doing to improve myself?”

But is it that important to improve one’s self? I guess it is. But I don’t know.

After all my failures. After all of my successes. After writing 21 books. After interviewing 500 of the best peak performers in the world.

After starting and selling many businesses. After tasting the bitterness of so much failure and bouncing back from it. After trying to get good at so many skills and succeeding at some and failing at others.

1) Take time out of your day to help the people you love.

Like, if I can help my daughters today, I will.

So at least you don’t have to deal with the fallout from being dishonest.

3) Try not to care what people think.

Although I know I will always care too much.

It’s good to let the brain wander. Creativity moves around a lot inside the brain. You have to let your brain wander in order to find out where creativity is today.

I’m not saying “starve” yourself. But let’s face it: you’re not that hungry. Eat as little as you can get away with. Don’t snack. Eat fruits.

The only reason for this is so you don’t get sick or feel sick and your bowel movements aren’t painful.

6) Nothing else is that important.

Let bad things happen and look for opportunities in them.

7) If someone doesn’t want to like you, then leave them alone and find people who do.

8) Never do anything you don’t want to do.

Always try to move in the direction that makes you happy. If you want to read a book about fishing, read that book. If you don’t want to go to a wedding, then don’t go.

And flow is fun. Whether it’s playing a game, or writing, or spending time with friends, try to get into flow as much as possible before you can’t anymore.

So that you aren’t lonely.

I wish I could follow all of this advice but I’m getting better at it.

Every day I’m getting a little better at it.

Today I’m doing a podcast. I’ve done almost 500. So this has been something I’ve worked hard at.

And then tonight I’m performing on the same lineup as one of the best comedians in the world.

I guess that’s a good thing although I’m pretty scared and maybe I will mess up.

So here’s what I will do and maybe this is the best advice of all:

I’m going to pretend I’m an alien from another universe, another dimension.

And I just landed in this body.

And my mission is: I don’t know why I’m here, but I’m here for a reason. Find out why and complete my mission because I’m only here for another 12 hours and then I’m never coming back to this dimension again.

And yeah, that’s the best advice ever!