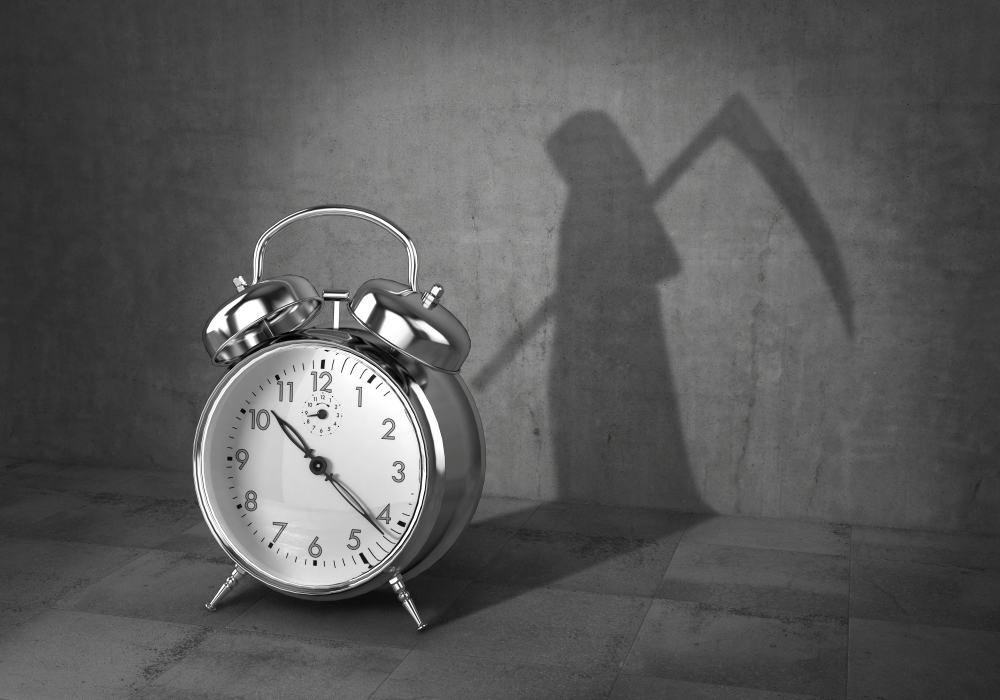 Death Clock Will Predict When You Die

The U.S. created about 500,000 fewer jobs in 2018 and 2019 than initially reported, according to a new report by The Bureau of Labor Statistics.

The BLS says that hiring for this period wasn’t as strong as it had initially calculated in its survey of business establishments. (And they kinda donked up the numbers way more than they usually do.)

How did the BLS magically create 500K jobs out of thin air, only to make them disappear again? (Find out in my new book: Harry Potter and the Overstated Employment Report.)

The BLS compiles the employment report every month from a survey of 700,000 businesses. But the government will go back to fine-tune those numbers after it’s had a chance to double-check the tax records.

Typically the revisions are quite small (about 0.1%). But this year, the number appears to be off by 0.3%.

Still not a huge margin of error in the grand scheme of things. But it’s the largest revision since 2009 when Kanye West interrupted Taylor Swift at the VMA awards (and the Great Recession, I guess).

“This makes some sense,” chief economist of Amherst Pierpont Securities Stephen Stanley told MarketWatch. “As the 223,000 average monthly increase in 2018 seemed too good to be true in light of how tight the labor market has become and how much trouble firms are said to be having finding qualified workers.”

The BLS has revised its original estimate of an average 223,000 monthly increase in employment (which would have been the strongest in three years) to as low as 180,000 a month.

Now, all of this comes with the caveat (there’s always a caveat) that these figures could change again when the BLS reviews its figures in February 2020.

However, unless the BLS has somehow misplaced about 500K jobs, these figures signal that the economy may not be as strong as we thought it was. And it could very well be the push the Fed needs to cut rates even further.

To be honest, we haven’t seen anything like this economy before. It’s breaking all the traditional models. But with several recession indicators flashing, it’s never a bad time to create a little financial security.

Recently a world-renowned entrepreneur, investor, and author you might recognize created a firestorm by pulling back the curtain one of Wall Street’s best-kept secrets in an online video that went viral.

In this video, he claimed he can show absolutely anyone how to generate as much as $3,000 in extra income each month, guaranteed, if you follow his simple financial technique.

You read that right. He actually issued a $3,000-per-month guarantee to any American who chooses to participate.

Obviously, this is a huge deal. So he’s only giving this guarantee to folks get in before this Sunday, August 25 at midnight.

Click here to claim your $3,000-per-month guarantee before it’s too late.

A bipartisan group of lawmakers is ringing the warning bells on a Chinese disinformation campaign spread through U.S. social media.

(Isn’t it nice when we can all come together and agree on something? Even if it’s just state propaganda from a totalitarian machine?)

Earlier this week, Twitter and Facebook discovered multiple state-owned accounts peddling disinformation (or as we humans call it: “big ole lies”) about the protests in Hong Kong.

Now, China has something of a reputation for censorship and state propaganda. (In 2019, their official stance on the Tiananmen Square massacre is still “Didn’t happen, folks. Haha. What are you talking about? So crazy.”)

But this marks the first deliberate effort to use social media to manipulate public opinion outside of China. And they seemed to be heavily focused on controlling the story in the U.S. specifically.

“I think our digital platforms like Facebook and Google should view this as a trial run for our elections in 2020,” said Texas Representative John Ratcliffe of the House Intelligence Committee.

“Certain foreign governments, including China, are attempting to limit the dissemination of facts while simultaneously spreading their own disinformation — and if they succeed in doing it to the people of Hong Kong, what will stop them from trying to do it to us?”

Facebook says that after being alerted to the campaign (by their buds at Twitter apparently), they removed seven pages, five accounts, and three groups linked to Chinese state media. Reportedly, some of those pages had more than 15,000 followers each. 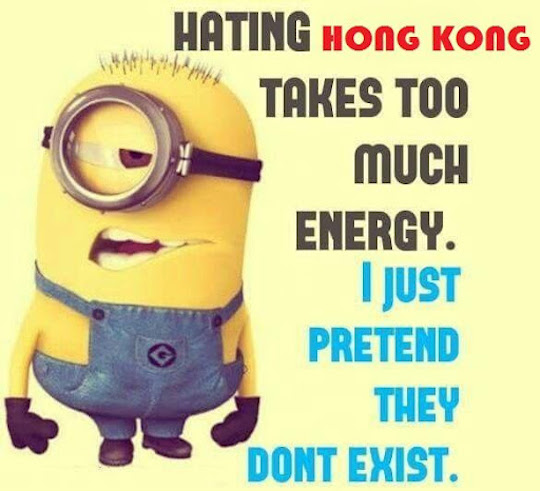 Meanwhile, Twitter said it took down 936 accounts, some of which had more than 100,000 followers. In a statement this week, Twitter said that many of these accounts were paying to boost their posts in news feeds.

“These accounts were deliberately and specifically attempting to sow political discord in Hong Kong, including undermining the legitimacy and political positions of the protest movement on the ground,” Twitter said. “Based on our intensive investigations, we have reliable evidence to support that this is a coordinated state-backed operation.”

As a result, Twitter will be banning all state-run media from purchasing ads on its platform from here on out. When asked if they’d be doing the same, Facebook said “Ehhhhh. We’ll think about it.”

Do you think you come across any of the Chinese government’s state propaganda in your internet travels? If so I’d love to know more about them.

Were they effective or convincing? Was it obvious they were coming from the Chinese government?

Click here to send me an email and we can discuss it in the readers’ comments section tomorrow.

America Has a Virus

The Department of Homeland Security issued a Ransomware Outbreak alert yesterday. (To which the dozens of American towns and cities held hostage by cyber criminals said “Yeah. Wow. This has been going on for months, my dudes.”)

Ransomware, in case you need a quick refresher, is a virus that encrypts data and holds it hostage until you pay the hackers a ransom.

Cyber criminals have been using a version of this tech for decades on private individuals. But in the last few years, they’ve realized that they can squeeze a lot more money out of big businesses, towns, and even whole cities.

(It helps that government organizations use out of date tech and update their antivirus software approximately never.)

“Ransomware has rapidly emerged as the most visible cybersecurity risk playing out across our nation’s networks, locking up private sector organizations and government agencies alike,” said the DHS in their report.

Today, 22 cities across Texas are simultaneously being held hostage by cybercriminals for millions of dollars. The attack is being investigated by the FBI and is being officially treated as a “disaster.”

However, because of the nature of these cyber-attacks, it’s often impossible to find the culprits. And even when you get on their trail they’re typically in places like China, Russia, Indonesia, or other places outside the FBI’s reach.

In some cases, it’s believed that these are state-sponsored attacks designed by foreign governments to sew chaos in the U.S.

The government network in my hometown of Baltimore was hacked in May of this year. And rather than pay the $76,000 ransom, the city has spent more than $5.3 million trying to recover from the attack. (Some stuff is working now, I guess, but there are still some systems on lock down.)

Yet, according to the DHS, more and more cities are simply giving into the hackers’ demands and keeping their mouths shut (which is causing an uptick in attacks).

“Many more infections are going unreported, ransoms are being paid, and the vicious ransomware cycle continues on,” said the DHS. “We strongly urge you to consider ransomware infections as destructive attacks, not an event where you can simply pay off the bad guys and regain control of your network (do you really trust a cybercriminal?).” (Hey DHS. We do the funny parenthesis around here, thank you very much.)

It’s estimated that more than 40 municipalities in the U.S. have been hit by cyberattacks this year. And the solution is really simple.

The government needs to update its virus software and stop clicking links in strange emails. (I don’t care how fertile they claim they can make you, Gary. No one sends magic virility secrets in a zip file.)

Are you living in any of the cities or towns crippled by ransomware? Click here to shoot me an email and tell me about your experiences.

“Death Clock” Will Predict When You Die

Dutch scientists have discovered new biomarkers that can accurately predict your likelihood of death better than ever before (yaaaaaay).

Researchers collected the blood work and health data from more than 44,000 Europeans aged 18 to 109.

Since then, 5,500 of those folks have died, which sucks, but it happens and is kinda the whole point of the study.

Using that data, the scientists were able to identify 14 biomarkers that have a strong correlation with mortality rate.

Biomarkers are biological data points such as your glucose levels or your ratio of polyunsaturated fats to total fatty acids.

And with this new information, researchers say they can now calculate the risk that you’re going to die in the next ten years more accurately than ever before.

(Creepy, I know. But it actually has some medical uses beyond “haha, you’re going to die.”)

“The association of our biomarker score with mortality is so strong,” study author P. Eline Slagboom, whose name I’m struggling to not make fun of, told Discover Magazine.

Slagboom (shakalaka) went on to say that the discovery was particularly startling considering it was only based on 14 metabolic markers in blood measured at a single point in time.

Notably, the study’s findings stayed consistent for patients over 60 years old, who have been notoriously difficult to diagnose risk of death until now. (It’s probably skewed by all those seniors who take up bungie jumping when they retire.)

“It is really surprising that if you measure blood samples only once in the lifetime of older persons, that the blood molecules reflect vulnerability in such a way that you can indicate 5- and 10-year mortality risk so well,” Joris Deelen, one of the paper’s researchers, told Discover.

The benefit of knowing when a patient is likely to die (apart from getting to plan your own funeral) is knowing when medical intervention is required and when to perform risky but potentially life-saving surgeries.

Basically, by knowing when and how you’re going to die, you have a better chance of prolonging your life (and, ironically, making the prediction wrong).

“We want to test if our biomarker score can be used to determine if there is improvement in mortality risk when novel medication is tested in elderly,” said Slagboom, who definitely should have been a professional wrestler with a name like that.

Of course, this is a data-driven science. Which means we’ve got to wait years to find out how effective it may be in application. But the potential is definitely there.