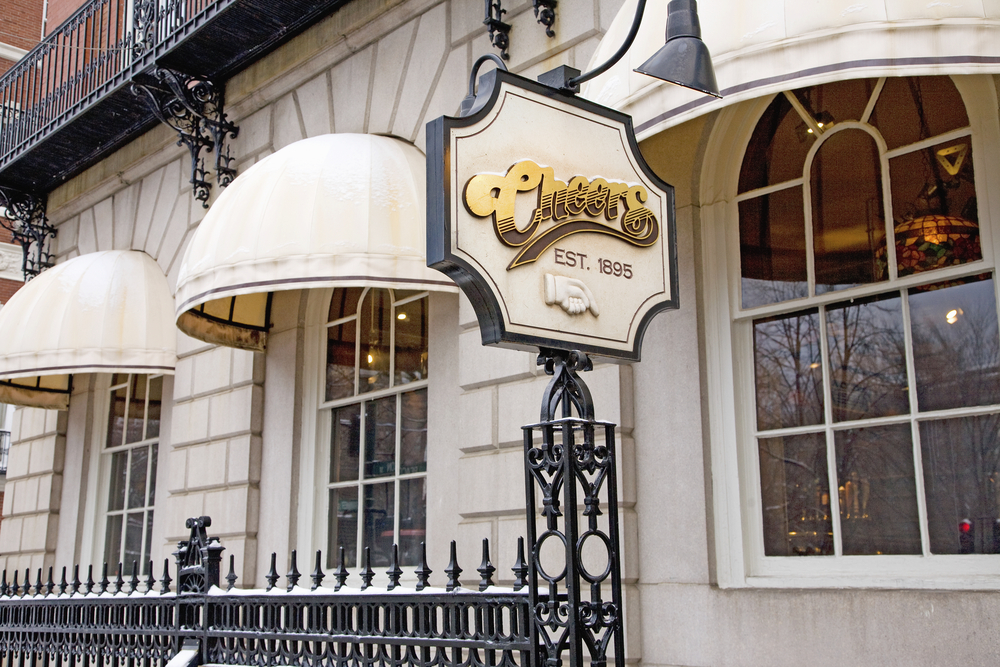 With almost 20 state-approved pot shops under their belt, Massachusetts regulators are turning their attention to the hot new thing:

I know. It sounds like a club where rich people wear creepy masks, have sex with each other, and engage in some light cannibalism. But it’s just legalese for a weed bar.

The Social Consumption Lounges would be set up in much the same way as a regular bar, with strict ID laws. But instead of booze you can smoke weed or eat weed-infused baked goods (and listen to The Best of the Grateful Dead on repeat for eight hours).

Lawmakers say the change of focus is to rectify a layer of inbuilt discrimination in the current MA weed laws.

As it stands, it’s technically legal for everyone to buy and smoke weed in Massachusetts. BUT:

Which means, if you don’t own your home, you technically can’t legally consume weed in Massachusetts (unless you visit Benjamin at his sweet new pad but you don’t really want to because Benjamin sucks).

This move to accommodate everybody’s need to get a little stinky reflects the changing attitudes to marijuana legalization in the United States.

As the chairman of the Cannabis Control Commission (this issue of One Last Thing was brought to you by the letter “C”) told reporters yesterday: “I believe it is the will of the people. I believe there is a strong desire to have this.”

Of course, the “will of the people” is all fine and dandy. But you can bet your bottom dollars’ worth of weed that this wouldn’t be happening if there weren’t ludicrous amounts of money to be made from legalization.

This story pitched by lawmakers says “equality” on the cover. But they’re just trying to maximize the amount of tax revenue they can suck up from this booming new industry.

Despite dozens of factors that point to federal legalization in the next year, most mainstream investors are still sleeping on investment opportunities in marijuana.

Which is great for us.

With a little research, our team was able to root out a massive payout plan (offered by the most profitable company in marijuana) that could double your retirement savings.

Click here to discover the “Weed-tirement Plan” and tap into the explosive growth in legal marijuana sales happening right now.

(P.S. Hit me up, Netflix. I have a visionary idea for a TV Show: Cheers reboot but with weed instead of beer.)

Mayor of New York Bill de Blasio has announced his candidacy for the 2020 presidency. And New York City is

When polled, 76% of New Yorkers said “Hizzoner” Billy D.B. should not run for president. This might come as a surprise to an outsider, considering De Blasio is the liberal mayor of one of the most liberal cities in the country (and was reelected in 2017 with 66.5% of the vote.)

But the people of New York share a real animus for De Blasio, who they view as hypocritical, power-hungry, and lazy. (Being both power hungry and lazy is an impressive balancing act.)

The New York Post, which has something of a love-hate relationship with the mayor (he slams them in interviews for their “negative, hateful, divisive tabloid culture.” They stalk him and take photos of him eating gas station burritos) reacted to the news with this little front page number: 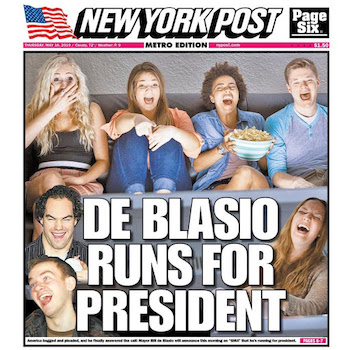 The New York Post has never been subtle or tasteful (then again, neither have I).

Yesterday, as De Blasio was in the ABC studios announcing his candidacy, the police union and public housing tenants were gathered in Times Square to signal their opposition. (Say what you will about New Yorkers, but they can organize a protest fast.)

“We’re gonna let the American people know what this mayor is really all about,” said John Puglisi, a Police Benevolent Association (PBA) official. “He’s no friend of labor, and he’s a phony progressive.”

What’s With All This Hometown Hate?

De Blasio has been rubbing his constituents the wrong way since day one of in office. Here are just some of the highlights:

But if he was somehow elected president (by a genie or something?) there would be one bright side for New Yorkers.

Here’s Luckin at You, Kid

Last night, Luckin priced its initial public offering at $17 per share, for an implied market value of roughly $4 billion. But shares opened at $25 each on Friday morning, or 47% more than the issue price. And shares continued to rise after the markets opened, gaining about 25% by the afternoon.

If you haven’t heard of Luckin a) you’re probably not Chinese and b) don’t beat yourself up. This rapidly growing coffee corp. didn’t even exist three years ago.

Historically, China’s not a coffee drinking company. They like tea. And that weird drink full of chewy balls. But over the last two decades, Starbucks has made some inroads into the country offering drinks developed to specifically to Chinese palates. (Probably by dropping weird chewy balls in ‘em.)

Luckin showed up in 2017 to capitalize on the progress Starbucks made with the Chinese public. Although Luckin didn’t offer “Chinese takes” on coffee. It serves a classic roster of traditional coffee — americanos, lattes, macchiatos, flat whites — in an attempt to become more Starbucks than Starbucks itself.

Since then, Luckin has exploded, growing to 2,370 stores in 28 cities in less than two years. And according to Luckin execs, the company aims to have 4,500 stores throughout China by the end of the year, outstripping Starbucks current count by about 900 stores.

That said, the general consensus among coffee drinkers on Weibo (China’s Twitter) is that Luckin coffee is a hot cup of liquid garbage. So what’s the secret behind its explosive growth?

Luckin takes a tech-focused approach to every aspect of its business.

The company is primarily a pickup or delivery service. (That means no sitting around working on your novel about how you go forward in time to solve your own murder, Alan!)

All orders are placed through Luckin’s own proprietary app. Which allows Luckin to collect a huge amount of data on its users’ eating and drinking habits. The company claims that allows them to serve the customer exactly what they want (hot, brown trash water, apparently).

It’s possible that the enormous amount of data its been gathering have given the company the edge in predicting customers’ wants and desires (which, again, is the juice from the end of your trash can, heated until boiling).

But it’s more likely that Luckin’s aggressive pricing is what keeps customers coming back.

A cup of Luckin’s hot brown is around $3.50, compared to $4.80 at Starbucks. And through its app, Luckin offers further reductions, like buy-two-get-one-free and 44% off snacks.

This strategy successfully attracted 16.8 million customers (with no taste buds) who bought more than 90 million cups of coffee. But it was not so generous to Luckin’s bottom line.

According to its IPO filings, Luckin is hemorrhaging money, losing $241.3 million in 2018 and over $82 million in the first quarter of 2019. (Thus continuing the fine traditions of startups who IPO with huge losses and no plan to making money any time soon.)

When Innovation Only Makes Things Worse

Yesterday, we dived into the world of Income Share Agreements (ISAs) — a system that allows universities and private companies to “buy shares” in students in exchange for a percentage of their income after graduation.

It’s an innovative solution to help students deal with the skyrocketing cost of U.S. college tuition. But in the long run, this clever little idea could potentially do more harm than good.

Today we’re going to get down and dirty with the darker side of “selling a slice of your soul to the man.”

Paying More? On average, someone on an ISA agreement will pay more than someone who was able to get a government-backed student loan.

Whether or not an ISA is for your kid depends on how likely they are to pay off that loan in their first 10 years of employment.

ISA’s have a fixed date that they end on. So there’s no way for your idiot kid to stop paying his loan and start racking up interest.

If your kid is a ding dong, then ISAs will ensure that they don’t end up carrying crippling debt into their 30s. (Unless they piss off to France for two years or stop working entirely.)

Better deals for some: The percentage you pay out of every paycheck is decided by your projected earning power based on your major.

The more money you will potentially make the lower the percentage you’ll have to pay.

This means engineers and scientist will get great rates, while English majors and social workers will have to fork over a significantly larger slice of their paycheck to cover costs.

This will naturally discourage applicants from those subjects (which is good or bad depending on how you feel about paying $40k a year for your kids to read Frankenstein).

Driving up prices: The biggest criticism I have of ISAs is that they are nothing more than a band-aid for a flesh wound.

Over the past 40 years, college tuition fees have tripled, far outstripping the rise of income levels and inflation. And while this strategy is an innovative solution that helps students who otherwise wouldn’t be able to afford college, it does nothing to remedy the actual problem.

In fact, by providing students a means to pay for college (through indentured servitude) it only enables the colleges to keep raising their prices. Which can only be bad news.

This might be the straw that breaks the camel’s back… or it could be an interesting investment opportunity. Our researchers are looking into it.