Fresh off a months-long worker strike, General Motors (GM) alleged that Fiat Chrysler (FCA) paid millions in bribes to UAW union heads to give the company a competitive advantage that potentially cost GM billions. (But to be fair to FCA, bribing Unions is part of Detroit’s rich and storied culture.)

According to GM (and the feds and several UAW officials and a guy I met in the bar drinking whiskey at 11 am), FCA engaged in a “pattern of racketeering” between 2009 and 2019, which resulted in GM paying much higher wages than FCA.

FCA currently holds an $8 hourly labor cost advantage over GM, though contracts are due to be renegotiated soon (and a little bird in a three-piece black suit tells me they won’t be getting the same sweetheart deal this time).

Eight dollars an hour may not seem like much. But when you apply that to GM’s 52,000 employees and multiply by the 2,080 working hours in the year that adds up to more than $865 million a year. (Enough to buy 10 Boeing 737 Max planes, crash them into the sea, and have enough left over to defend your actions in court.)

“As part of this bribery scheme, and to lock in the competitive efficacy of the purchased benefits, concessions and advantages for FCA, GM was denied similar union commitments and support,”GM’s lawsuit states.

“After a failed bid to take over GM in 2015, FCA corrupted the collective bargaining process by structuring terms through bribed UAW officials that forced unanticipated costs on GM.”

GM alleges in its suit that former FCA CEO and industry legend Sergio Marchionne was a “principal figure in the conspiracy.” (Marchionne declined to respond to allegations on account of being dead since 2018.)

In response to the federal probe’s findings, FCA has claimed the “misconduct” (racketeering) was perpetrated by a small group of greedy dudes acting in their own self-interest.

Despite three FCA executives having pleaded guilty in an ongoing federal corruption probe, the company is absolutely shocked and appalled that anyone would think they were capable of any wrongdoing.

“We are astonished by this filing, both its content and its timing,” said FCA in a statement, clutching its pearls. “We can only assume this was intended to disrupt our proposed merger with PSA as well as our negotiations with the UAW. We intend to vigorously defend against this meritless lawsuit and pursue all legal remedies in response to it.” 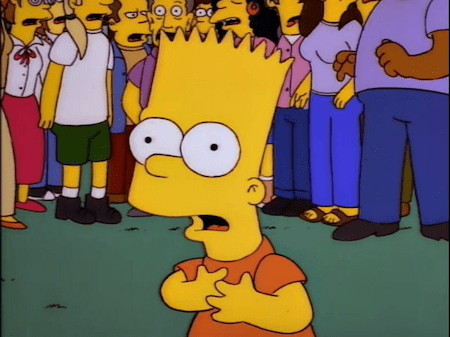 If you’re a Michigander with something to say, shoot me an email and give me your take on the ongoing UAW corruption scandal. I’d love to get an inside perspective on this one.

Presidential hopefuls took a trip to Wing Town last night for a basket of Lemon Pepper Wet served with a tepid glass of partisan back-patting.

The fifth presidential debate in Atlanta kicked off with the Dems taking turns dunking on President Trump and the impeachment inquiry for some easy points with their voter base.

“I think the people of this country are catching on to the degree that this president thinks he is above the law. And what the American people are saying, nobody is above the law,” said Sanders waving his arms around like he was trying to scare off a bear.

“And I think what the American people are also saying is, in fact, that if this president did break the law, he should be prosecuted like any other individual who breaks the law.”

On the whole, though, last night’s debate was a relatively bloodless affair, with candidates passing over the jugular for a nice warm jug of chamomile tea instead.

South Bend Mayor Pete Buttigieg took the most flak of the night, as his rising numbers made him target for low-polling candidates looking bank some screen-grabbing moments. (Or should I say, some “screen-Gabbing” moments.)

Representative Tulsi Gabbard, who was literally raised in a cult and may still be in one (Not a Joke™. We should do a feature on that sometime.), criticized Buttigieg for supporting the U.S. military working with Mexican officials to combat the cartels.

Buttigieg responded by attacking Gabbard’s own (cult-grown) decision-making faculties, specifically when it comes to meeting with blood-thirsty dictators. (Everybody needs friends, I guess.)

“If your question is about experience, let’s also talk about judgment,” said the little mayor that could. “One of the foreign leaders you mentioned meeting was Bashar al-Assad. I have in my experience, such as it is whether you think it counts or not since it wasn’t accumulated in Washington, enough judgment that I would not have sat down with a murderous dictator like that.”

Senator Kamala Harris, who has plunged in the polls following a strong debut, took a swipe at Buttigieg’s electability, referring to his total absence of support among voters of color. And she ain’t wrong here, folks.

In key states like South Carolina, Buttigieg is polling with black voters at a whopping… 0%. But Kamala really shouldn’t be throwing that specific stone in this specific glasshouse.

Though she generally has the “support and well wishes” of the community, a majority of black voters say they wouldn’t vote for her in the primaries over concerns that white voters wouldn’t see a black woman as electable.

And that brings us neatly to our B-B-B-B-Biden Gaffe of the Night™. (It just wouldn’t be a Democratic debate without former Vice President Joe Biden saying something buck wild.)

Biden, who holds a steady lead with African-American voters, proudly stated that he has the endorsement of “the only African-American woman who’s ever been elected to the United States Senate,” referencing former Illinois Senator Carol Moseley Braun.

Never one to pass up an easy dunk, Senator Kamala Harris had to remind Joe that there have been two African-American women elected to the United States Senate.

And she was the other one.

Did you catch the debates? Dems and conservatives, who do you think is electable? Are there any underrated candidates? Is there someone you think shouldn’t even be in the race?

Click here to shoot me an email and we’ll have it out in it in the comments section tomorrow.

Five Dollars for a Hit of Air in Smog City

In response to growing health concerns, a new trend is sweeping the smog-choked capital of India, New Dehli: breathing.

The city of 25 million people has been struggling under the weight of a public health crisis, in which someone has taken all the air out of the city and replaced with a black cloud of bad smells and burning sensations.

For the last two weeks, unsafe air pollutants have spiked to 20 times the safe limit as recommended by the WHO. (The world health organization. Not the band. As far as I know, Roger Daltry has no opinion on what is considered a safe amount of air pollution.)

As a result, pretty much everyone in Dehli is suffering from itchy eyes, runny noses, and throat infections. And innovative young entrepreneurs/grifters have spotted an opportunity to exploit that.

At oxygen bars popping up across the city, customers can inhale 80%-90% pure oxygen infused with peppermint, cinnamon, lavender, and lemongrass oils for the low, low price of $4.17 per 15-minute session.

For some perspective, the average annual salary in New Dehli is only about $6,731. So that’s some pricey flavored breathing juice.

Some folks say that they feel better after the “treatment.” Though that’s probably just because they got super high huffing 90% oxygen.

Doctors, on the other hand, say there’s no benefit to breathing high concentration oxygen (other than sick buzz, wasssuuuu-). What’s more, huffing O2 at this level could even be harmful to patrons, causing serious lung damage (-uuuuup).

Kapil Gulliya, who works with a financial services firm, told the SCMP the oxygen bar was a gimmick, misusing the alarm over pollution for commercial purposes. “What use is 15 minutes of oxygen when pollution is many times the international safe limits here, equal to smoking 30 cigarettes a day?”

While we were finalizing today’s issue, news broke on a story we’ve been watching closely in One Last Thing.

In a break from tradition, I’m pushing today’s “one last thing” to tomorrow to cover this story as its happening. (Because I’m a Bad News Boy who doesn’t give a flip about the rules.)

Our old friend Benjamin “Bibi” Netanyahu was indicted today on charges of bribery, fraud, breach of trust, and just kinda generally being an ass.

The 70-year old is the longest-serving prime minister in Israel’s history. And now he has the distinct pleasure of also becoming the first to be indicted while in office.

Accusations of corruption have dogged the prime minister’s office for years. But his position as leader of the country wrapped him in a safety blanket of immunity and pretending nothing happened.

Bibi is still technically the PM of Israel. But only because his rival Benny Gantz, who defeated Netanyahu in the general election, has been unable to form a government.

This has called Bibi’s status of immunity into question, leaving him vulnerable to indictment. He stands accused of giving political favors to several media tycoons in exchange for favorable news coverage and gifts worth hundreds of thousands of dollars.

“The public interest requires that we live in a country where no one is above the law,” Attorney General Avichai Mandelblit said in a televised evening news conference.

Under current Israeli law, Bibi could remain in office while standing trial for the charges. However, he would be removed from his position if convicted. And the criminal charges could make it difficult to hold onto the position if there’s another general election.