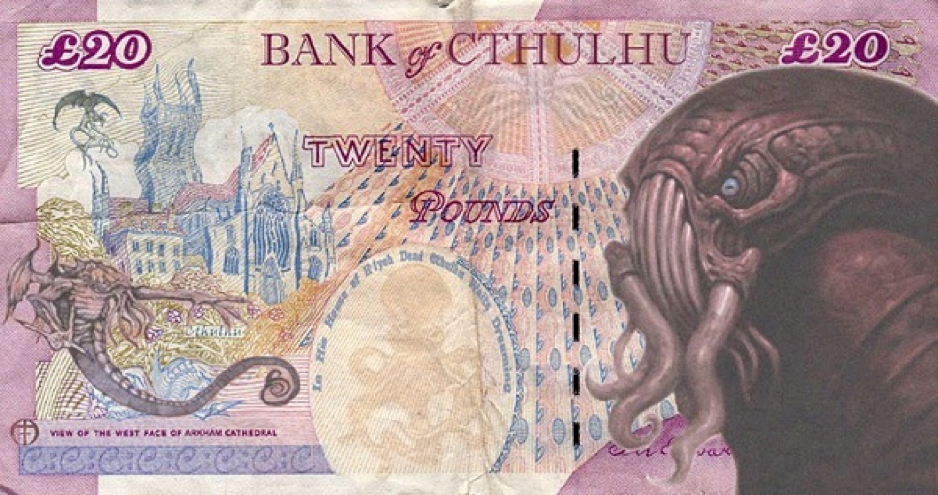 Crypto Was Not Born For This World

“In twenty years time Bitcoin will either have died a death or will be a universal phenomenon.” -Satoshi Nakamoto, 2008

These cryptocurrencies and hundreds more make up the burgeoning “cryptoeconomy” — the first true financial innovation humans have seen since double-entry bookkeeping.

And, because it’s free, untethered by gobs of red tape, we’re seeing an absolute explosion of potential ways to flip nearly every industry on its head (and, yes, namely in the ICO markets, a whole lot of empty, head-shaking hype).

Governments keep turning their heads sideways trying to figure out how to fit the crypto-economy into the old framework. But they can’t. It doesn’t fit. It won’t. It’s shaking its head no.

It was not born for this world. It requires a new set of lenses.

“The root problem with conventional currency is all the trust that’s required to make it work. The central bank must be trusted not to debase the currency, but the history of fiat currencies is full of breaches of that trust.”

So he created a system which could outsource this trust to the irrefutable and objective power of math.

And, finally, Satoshi saw the need for a decentralized “censorship resistance,” too. It was obvious from the beginning that, if bitcoin caught on, it would severely threaten the status quo.

“Governments are good at cutting off the heads of a centrally controlled networks like Napster, but pure P2P networks like Gnutella and Tor seem to be holding their own.”

Indeed, we’ve spilled plenty of virtual ink on the rise of cryptocurrencies and blockchain tech. And, long-term, we’re incredibly optimistic.

There’s no way of predicting precisely how the crypto-economy will play out. But it’s exciting to have front-row seats to the show.

Because, the naked truth is, crypto is not built to fit into this world.

It’s built to make it obsolete.

(For a bleaker outlook: If, of course, as some have suggested, Satoshi is a State agent, perhaps even of alien descent, bitcoin is just an incredibly cunning and sophisticated ruse to make a cashless/RFID microchipped NWO society all the more inevitable. If that’s the case, bag up your beans, bullets and metals and run for the hills. We’re all doomed.)

Today, to give a rundown on the current crypto-economic landscape, we invite Jeffrey Tucker.

The cryptoeconomy, he says, is flowering before your eyes.  And, this time, the tables have turned on government regulators.

The Cryptoeconomy is Flowering Before Your Eyes

The statue in front of the Federal Trade Commission shows a horse (the market) being restrained by a man (government). The idea is that the horse is physically determined but wild, driven by instinct, and potentially destructive. 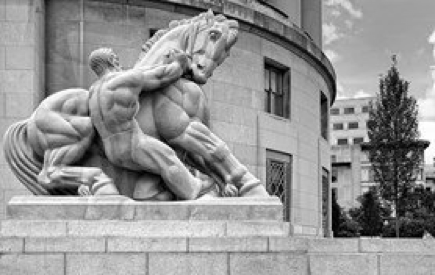 The man is strong but mostly works with his mind with the purpose of correcting the excesses of the horse through mental determination and rational intelligence. The statue embodies that classical New Deal mindset: without government, economic forces lead to social disaster.

In the currently emerging cryptoeconomy, however, the roles are reversed. The crypoteconomy refers to a growing array of emerging technologies, rooted in public-key cryptography, that enable individuals to engage in a huge range of economic activities that were previously possible only through financial intermediaries.

In building this suite of technologies, the market is behaving with astonishing intelligence, turning out innovations every day that would have been inconceivable a decade ago. Whole worlds of code are being woven by a decentralized network, seeking to solve universal human problems concerning finance, monetary economics, contracts, insurance, property titles, and every other form of human engagement.

The pace of development is red hot. Every innovation is being tested against user experience and investor enthusiasm. You can follow the market in real time, with digital currencies and other forms of digital assets soaring to new heights and making millionaires by the day. It’s no longer just about Bitcoin. It’s about thousands of new services being built on top of distributed platforms such as Ethereum, a code environment that does for crypto what iOS first did for the app economy.

So far, governments have contributed nothing but confusion, threatening some kind of intervention to make crypto work like the old world, but not knowing precisely what to do to make that happen. Like the wild horse, regulators are physically determined and acting from instinct in ways that can only be destructive.

Consider the remarkable growth of Initial Coin Offerings (ICOs). They are the market’s answer to the problem of raising cash for conventional public companies under which the compliance costs and paperwork required by government is forbidding. With ICOs, a white paper is released to the public and new tokens issued based on the company ledger, and are typically sold for Bitcoin or other cryptocurrency.

If you ask people involved in ICOs (Initial Coin Offerings) where they stand with regard the SEC filings and other forms of regulatory compliance, you will see the blood begin to drain from their faces. Everyone knows some kind of regulatory reaction is coming but no one knows quite what. Meanwhile, the future can’t wait. Entrepreneurs are forging ahead.

The crypto economy today looks very much like the app economy in about 2009. It is new and exciting, and being built entirely through the efforts of private enterprise, bit by bit. There was no such thing as the app economy ten years ago. No regulator, politician, or influential academic proposed it or contributed anything to its building. And yet, today, the app economy is as large as Hollywood.

Think about it: the economic and cultural implications of the app economy are as enormous as the film industry, which took 100 years to develop to its current state. The mobile app market achieved the same in less than a decade. Most of us couldn’t imagine getting through the day without our apps, which help us drive, travel, shop, stay secure in our homes, listen to music, and engage in an astonishing number of communications.

The app economy is still mostly unregulated today. This is because it is mostly centered on the service sector where even today government is not heavily involved. The regulators simply cannot keep up and have mostly acquiesced to the idea that this sector will be market driven.

An exception here is municipal transportation. App-based ride-sharing services have completely changed the way people think of getting rides around a city. Regulators have worked hard to stop the progress but have only succeeded in slowing its development in select locales.

The app economy has been fueled mostly by old-economy forms of financing and payment. People use subscriptions based on credit cards rooted in dollars, and many apps pay their bills through advertising. It works as far as it goes.

But the invention of crypto-based financing options introduced another possibility. With Bitcoin, we have a new monetary tool to compete with old payment forms. It enabled the democratization of financial support, making it possible for new companies to crowdfund investment capital in a way that had never previously been possible.

The best example so far of this new approach happened on June 1, when one new company raised the equivalent of $35 million in the blink of an eye. The one-time CEO of Mozilla, Brendan Eich, had proposed a new browser (Brave) that would tokenize what you do on the web. Instead of advertising, the experience would commoditize your attention and browsing habits. The name of the token itself had an anti-hype ethos about it: the Basic Asset Token.

One billion tokens were issued at the Initial Coin Offering. They sold out in 30 seconds. Now the company can proceed with development, even as the token market itself shows a current market capitalization of $250K.

Eich’s credibility counted so much here. He is a trusted source in this community that has become very savvy for policing itself of frauds (of which there are plenty). This experience will probably go down in history as legendary, like the day in 2010 when two pizzas were sold for 10,000 Bitcoin. It is both a proof of concept and a foreshadowing of a bright future for the sector.

As with many of these new tokens, BAT is an extension of the Ethereum platform, which has a much more aggressive model of development (move fast and break things) than the more conservative Bitcoin blockchain ever had. This alone raises certain questions about the stability of the platform going forward. No one believes these markets are anything but highly risky.

That said, the future of these cryptoeconomic structures is stunningly bright. It’s a new way of doing just about everything enterprise wants to do, and will eventually come to affect all institutions that have anything to do with securities, money, transfers, insurance, titling, and contracting, not just in the United States but all over the world.

What about the Regulators?

The app economy developed in a robust way without government oversight. In fact, we can go further to say that the app economy developed so big and so robustly precisely because it inhabited a legal environment that was left to the free market. Imagine if the Consumer Products Safety Commission were in the position of approving or disapproving every app that had some impact on the quality of life? The sector would never have gotten off the ground.

But the cryptoeconomy is a different animal entirely. It adds that crucial element: a means of payment. That’s what changes everything. Suddenly we see the possibility of a recreating of the entire financial and monetary sectors of economic life from the ground up. For now, the market is largely free of government interference. But because government has been involved in this realm for some 500 years – and so many special interests have a stake in controlling it – it surely will not stay this way for long.

Whatever path the regulators choose, it is likely to be akin to the proverbial pounding of the square peg into the round hole. The current regulatory machinery presumes things that are simply untrue about the crypto economy: mediated transactions, relationships built on prior trust, know-your-customer rules, and a permissions-based system of innovation. The cryptoeconomy was born in freedom and wants to stay free, based on the core principles of peer-to-peer exchange.

Whatever regulators do, they will be behaving like the wild horse in the famous statue, even as the brilliant innovators work to both restrain the horse and somehow make market progress happen for their fellow human beings.

(Note: you can follow the development of all these markets at BraveNewCoin.com)

[Ed. note: This article originally appeared on FEE.org right here at this link.]