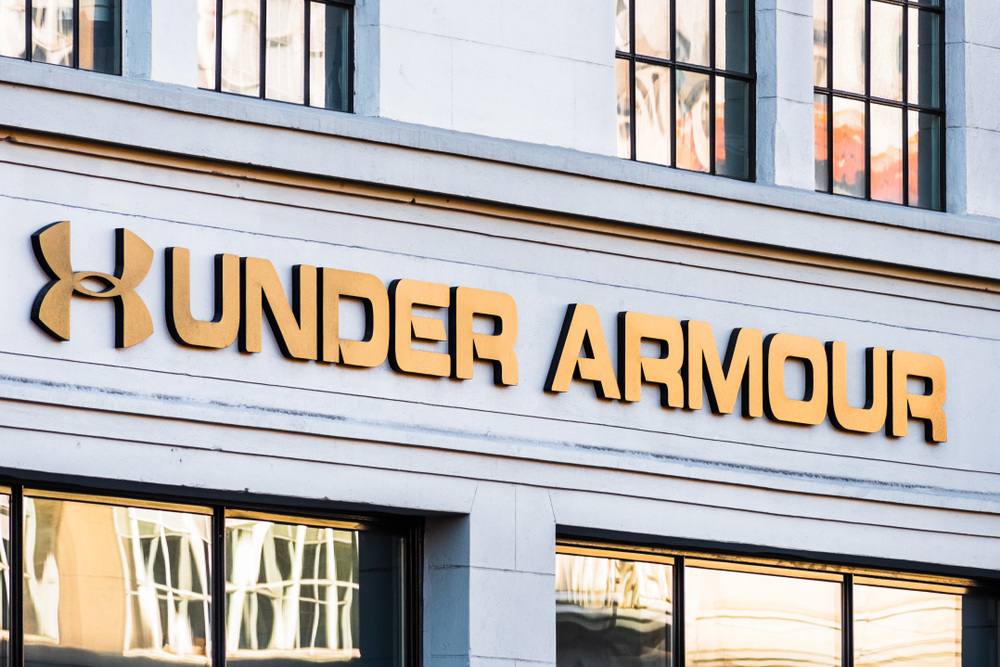 Uber Exceeds Investors’ Expectations (Of How Much Money It Can Lose)

Uber exceeded analysts’ forecasts on the top and bottom line for Q3 2019 but is somehow losing even more money than it was before.

(Huh. It’s almost like this stupid business model doesn’t work or something.)

The puke-if-you-like-its-not-our-car app reported revenue of $3.81 billion, compared to an expected $3.69 billion. Which is fine, unless you peek behind the curtain and see the $1.16 billion net loss that hemorrhaged out of the company this quarter.

The Q3 loss of more money than most companies will ever be worth topped its $986 million loss during the same quarter last year. (You know what they say: you gotta lose billions of dollars to make money.)

In an interview with CNBC, CEO Dara Khosrowshahi acknowledged that generally speaking, companies are supposed to not lose a billion dollars every quarter.

“We know there is the expectation of profitability,” said Khosrowshahi, flying around the room, propelled by the force of all of the money shooting from his pockets.

“We expect to deliver for 2021.” (When Khosrowshahi hopes to fire everyone and replace them with robot cars. Even the accountants.)

Revenue from Uber’s Side Projects to Try and Make a Profit Somehow™ continued to grow at a healthy clip this quarter.

Uber Eats gobbled up some of Grubhub’s dwindling market share, growing 64% year over year. The company’s logistics division, Uber Freight, grew 78%. While Uber’s most established business (just taking people from one place to the other) grew just 19% year over year.

Khosrowshahi laid out his plan to turn this money hole into an actual company by driving lower rates by investing in the best technology rather than offering steep discounts that eat into the company’s bottom line.

(In case it’s not glaringly obvious, “the best technology” is robots that allow us to fire all our drivers.)

Khosrowshahi wants to make it clear to investors that the “growth at any cost” days of the company are over and that efficiency and profitability are now priority numero uno.

“It was absolutely the right set of priorities for the time,” said Khosrowshahi, while dousing a pile of Benjamin’s in gasoline. “Our priorities are changing.”

Shares of Uber (UBER) declined more than 5% this morning. And we may see a larger wave of selling before the week is out.

Uber’s lockup period on its shares will expire on Wednesday, after which Uber employees will be free to cash in their shares (and they probably will if they’ve been paying attention).

Shares of Under Armour (UAA) are starting to stink as the company confirms reports of a teency weency federal probe into the company’s accounting practices.

Despite beating Q3 expectations, Under Armour’s stock tanked 18% yesterday when it came clean about a federal probe first reported by the Wall Street Journal.

Reportedly, the Feds are investigating accusations that the company spread around its revenue month to month to smooth out the numbers. (We in the biz call that cream cheese accounting.)

According to Under Armour CFO David Bergman, the investigation has been underway since 2017. Which just so happens to be when then-CFO Chip Molloy left the company for “personal reasons.” (“Personal reasons” like how Chip personally preferred all the numbers to be smooth like cream cheese.)

“We have been fully cooperating with these inquiries for nearly two and a half years,” said Bergman on a call with investors. “We firmly believe that our accounting practices and disclosures were appropriate.”

Net revenue for the maker of t-shirts that people give you as a gift when they want to not so subtly tell you to lose weight fell 1% to $1.43 billion from $1.44 billion a year earlier. That beat expected sales of $1.41 billion.

Sales in North America, where Under Armour is struggling to compete with rivals, were down about 4% to $1.01 billion. Meanwhile, sales of footwear dropped like people are finally getting over this whole “wearing shoes” thing, with revenue falling 12%.

When the markets closed yesterday, shares of Under Armour (UAA) were down about 3% year to date.

He’s been using this technique since he started trading 25 years ago, back when he was still an Air Force pilot. And in the last five years alone, he’s generated more than $3.7 million with it.

If you missed out on the big reveal, my publisher Doug wants to offer you a special chance to test drive Chuck’s incredible system.

Click here before it’s too late. This offer expires tonight, November 5 at midnight.

Tariffs May Be Rolled Back Before December 15

The U.S. and China are considering rolling back tariffs as part of phase one of the trade negotiations.

(And as with all trade wars news, take this with a big ole pinch of salt. In fact, just take a fistful of salt and throw at your wide-open mouth. Whatever lands in there is the right amount of salt to take this with.)

Until now, the premise of the “phase one agreement” was to prevent any further tariffs going into effect.

But officials from both sides of the negotiation table have indicated that things are going so swimmingly, removing tariffs already in place is now an option. (Or this whole thing may be on the cusp of exploding and drawing it out for another year.)

“Both governments have to give to get,” executive vice president at the U.S. Chamber of Commerce and stereotypical “rich man,” Myron Brilliant, told the WSJ. “The two sides are really close to a deal but it will come down to the presidents to make the final call.”

Of course, all this is still up in the air. President Trump and Chinese officials will have to sign off on the deal, and negotiations have broken down at this stage in the process in the past.

China’s state-run media seems to indicate that the Xi Jinping’s regime is happy enough with this agreement. But then again, you know how I feel about “state-run” media. And regimes. And governments who put folks in concentration camps and harvest their organs.

The negotiators are trying to get this phase one deal tied up with a bow before the next round of tariffs go into effect on December 15, so we’ll know soon enough.

The Real Reason Gold is Rallying

Gold’s had a heck of a year, folks.

The precious metal (that financial journalists like to creepily refer to as the “yellow metal”) is up more than 18% year-to-date.

Right now, it’s trading above the crucial $1,500 mark which has held it back in the past. So I reached out to my colleague and macroeconomic expert Graham Summers to find out exactly what’s going on.

Graham. Is this the end of the world?

I’ve been receiving a lot of questions about the recent rally in gold, Shane.

After trading sideways for the better part of five years, the precious metal has been on a tear, roaring higher by almost $300 per ounce. This momentous climb higher is shown on the chart below. 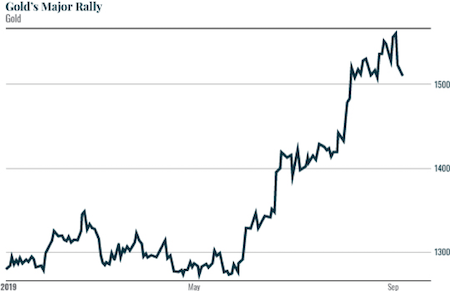 There are multiple reasons for this, but all of them boil down to the same thing…

It is now clear that central banks cannot normalize monetary policy ever.

The Fed, the European Central Bank (ECB), and the Bank of Japan (BoJ) are all talking about cutting interest rates and introducing new Quantitative Easing (QE) programs through which they print new money to buy assets.

This comes after 10 years of the most extraordinary central bank monetary policy in financial history.

The ECB and BoJ currently have interest rates at NEGATIVE. The Fed will be joining them sometime next year. This is forcing the bond market to move into negative yield territory in which lenders are PAYING borrowers for the right to lend them money!

THIS is why gold is rallying.

With over $19 trillion in bonds currently having negative yields… gold, which has a yield of ZERO, is actually looking attractive in relative terms.

Indeed, gold is now looking more and more like a standalone currency: one that cannot be devalued by central banks. As such it is extremely attractive relative to the U.S. dollar, the euro, and the yen.

This explains why the precious metal has broken out against all three of those currencies. 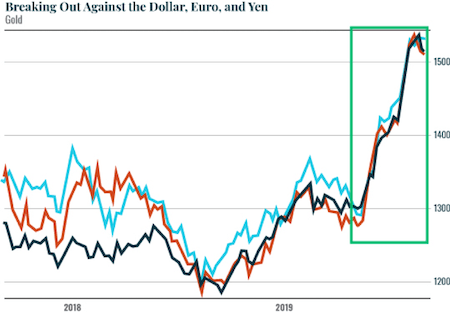 Put simply, gold is telling us that central banks are about to engage in another round of extraordinary monetary policy. And as gold has already shown us, if you time this correctly you could make a literal fortune…