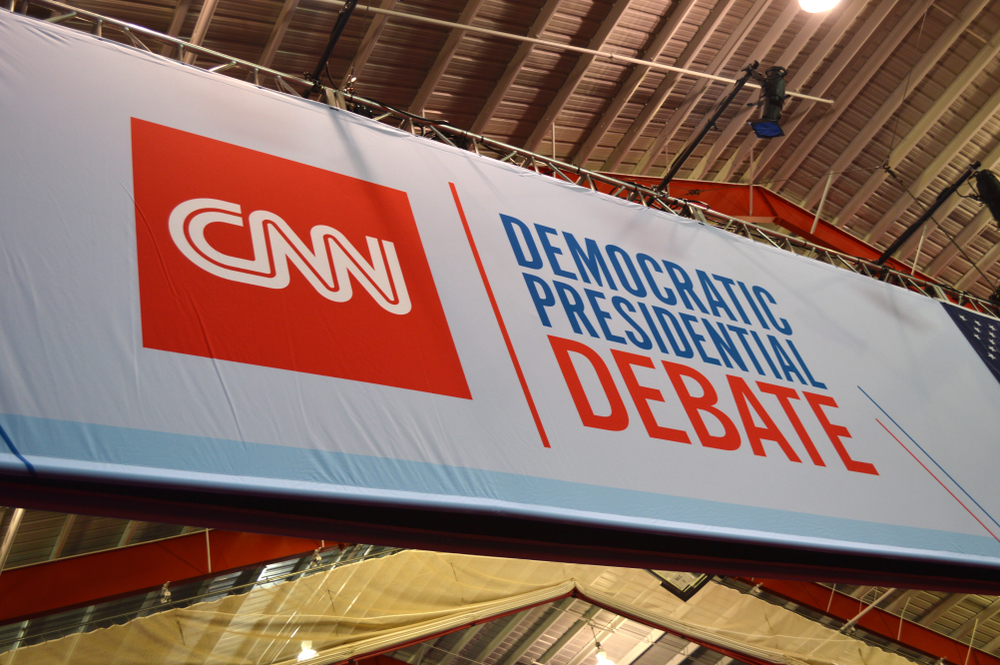 A bipartisan group of law dudes has proposed a bill to subsidize U.S. tech firms to counteract the encroaching menace of Chinese 5G.

Senators Richard Burr (R-NC) and Mark Warner (D-VA), who head up the Senate Intelligence Committee (as well as the bipartisan improv group Donkeyphant), introduced the legislation which takes aim at the Beijing-backed telecom giant Huawei.

The Utilizing Strategic Allied Telecommunications Act would direct $750 million toward companies developing 5G and create a separate $500 million fund for companies that deploy “trusted and secure” equipment (read: not Chinese).

“The widespread adoption of 5G has the potential to transform the way we do business, but also carries significant national security risks,” Burr said in a statement on Tuesday, his head sticking out of the two-person suit he and Warner spent their whole allowance on.

“Those risks could prove disastrous if Huawei, a company that operates at the behest of the Chinese government, military, and intelligence services, is allowed to take over the 5G market unchecked.”

U.S. security officials have been spooked by the rapid growth of [insert creepy theremin noise] Huawei’s business and influence.

In less than a decade, the Beijing company went from a third-rate budget phone maker to the world’s largest telecom equipment company/pain in everybody’s ass.

According to U.S. officials, Huawei’s growth was directly subsidized by its pals in the Chinese government through low-cost loans and other support that gives the company an uncompetitive edge against Western rivals.

(Basically, Huawei is the rich kid whose daddy paid for everything. But instead of tooling away days in a cozy office on the 32nd floor of a Manhattan skyscraper, it’s spreading Chinese technology and influence across the globe. )

Today, as the only major telecom company ready to roll out 5G on a global scale, Huawei is poised to dominate the fifth generation of wireless tech which will define the next decade of internet technology.

Burr and Warner’s bill would fund research and development by any company into open-source 5G technology. Working together to create an open, software-driven approach to 5G would potentially level the playing field with Huawei and even allow smaller companies to gain a foothold in the 5G market. (I love me a mom-and-pop global internet provider.)

“Every month that the U.S. does nothing, Huawei stands poised to become the cheapest, fastest, most ubiquitous global provider of 5G, while U.S. and Western companies and workers lose out on market share and jobs,” said Senator Warner, who co-founded wireless group Nextel prior to serving in the Senate (but I’m sure that has nothing to do with it).

“It is imperative that Congress address the complex security and competitiveness challenges that Chinese-directed telecommunication companies pose.”

Senator Bob Menendez (D-NJ), one of the sponsors of the bill, says that it’s great that Trump likes to dunk on Huawei in the media but it’s “no replacement for the development of 5G alternatives.”

“This bill, which will supply the U.S. government with resources to help the private sector create viable 5G alternatives from all ends of the supply chain, is a long overdue step in the right direction,” said Menendez.

“As I’ve said over and over again, confronting China is not the same as being competitive with China. It is time we do just that.”

Bitcoin Hasn’t Started a Year This Hot Since 2012

Bitcoin made a New Year’s resolution to not suck so much in 2020, and, so far… it’s sticking to it.

The crypto queen rose more than 21% in the first two weeks of 2020 — by far its best showing since the heady days of 2012, when the nephews of the world had yet to ruin a Thanksgiving dinner with their talk of bitcoin world domination.

Many of the smaller “alt coins” (AKA itty-bittycoins), including ethereum and XRP, followed in their older sister’s footsteps; hitting the gym, quitting carbs, and kicking off the year with more than 20% gains.

“The Iran uncertainty combined with the positive launch of CME Bitcoin Options were strong catalysts driving an eruption in bitcoin and even adding heat to the struggling top 100 alt coins,” Jehan Chu, co-founder of Kenetic Capital, told CNBC.

Another factor contributing to this New-Year-new-bitcoin attitude is an upcoming crypto phenomenon known as the “halving.”

During this long-anticipated event, anyone who does not own bitcoin will be cut in half. Either that or the time it takes to mine a single bitcoin will double, thus halving the supply of bitcoin. (I can never remember which.)

As you’d expect, the price of bitcoin has jumped significantly after each halving. And experts are predicting this year’s halving (known as the Halfening in Europe) could take the crypto as high as $16,000 by the end of the year.

I’d like to hear from you guys on this one. I own some BTC for fun but I’m definitely not as plugged into this world as some of our readers.

Do you own bitcoin? What’s the scuttlebutt in the community for 2020 and beyond? If you don’t own bitcoin, would you ever consider it? Could 2020 be the year?

Click here to shoot me and email and we’ll argue about it in the reader’s comment section tomorrow.

Well, folks. That’s the last Democratic debate before the Dems drive their little hybrids to the polls and start voting, so you know what that means!

I watched it… and now I’m going to tell you what happened… so you didn’t have to watch it… and I wish I didn’t either™. (Man, I gotta fire my catchphrase guy.)

Last night, just six of the 12 remaining candidates took to the stage, with notable candidates like billionaire Mike Bloomberg, Yang Gang Chairman Andrew Yang, and surf-cult member Tulsi Gabbard unable to meet the funding and polling goals required to secure a place on the stage.

Tom Steyer, who I forgot existed, and Amy Klobuchar, who once ate a salad with a comb to spite an aid, joined frontrunners Biden, Sanders, Warren, and Buttigieg on the debate stage. But the two stragglers had little to contribute to a spirited debate on Iraq, gender politics, healthcare, and (I have no idea why) Vietnam.

For the first time in the campaign, foreign policy was a central issue of the debate for some reason or another. (It’s right on the tip of my MQ-9 Reaper drone but I can’t quite put my ground-to-air ballistic missile on it.)

Like almost every issue of the night, the debate was spilt into two teams of two; with Biden and Buttigieg firmly on the side of kicking ass and Warren and Sanders instead proposing we kick our own asses (out of the Middle East).

Warren said that as commander in chief she’d fight the “revolving door” between defense industry contractors and the Defense Department and would call to “get our combat troops out” of the Middle East.

But the coatrack wearing former Vice President Biden’s skin countered that “there’s a difference between combat troops and leaving special forces in a position” and pulling out the troops now would leave the region wide-open to fan-favorite villains ISIS.

The ever-growing schism between the Super Socialism Pals took center stage last night, as the CNN moderators dredged up accusations that Sanders told Warren that a woman couldn’t win the presidency at a meeting in December 2018.

Sanders flat out denied he ever made the remark, pointing to his record of campaigning for women (and his sweet FBI “Feminist Body Inspector” hat).

“How could anybody in a million years not believe that a woman could become president of the United States?” he said.

When asked by the totally 100% objective CNN moderators how she reacted when Sanders told her she couldn’t be president, Warren said she disagreed and added that only the two women on stage had never lost an election. (I mean, I’ve never lost an election either but that doesn’t make me electable.)

“Collectively they have lost 10 elections. The only people on this stage who have won every single election they have been in are the women: Amy and me.” 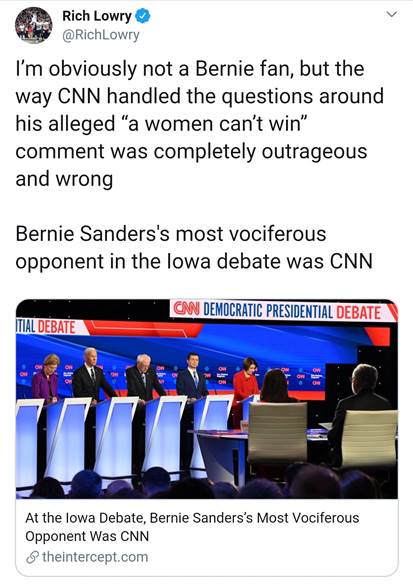 After the debate, the left and the right came together in one beautiful moment to agree that #CNNisTrash.

Old Joe managed to avoid any major gaffes last night, refraining from telling stories about how he beat up a guy called “Cornpuff” with a chain. But despite keeping his size-12 men’s loafers out his mouth, the former vice president gave a wholly unremarkable performance.

Joe pressed the issue of electability on multiple occasions, saying he had broader support than any other candidate in the field, specifically among black Democrats.

“The real issue is who can bring the whole party together,” said Joe, visibly struggling not to call every woman in the room Margaret Thatcher. “I am the one who has the broadest coalition of anyone running up here.”

As has become tradition, I’d like to use this time after the debate to take the temperature in this big weird room.

Dems: Who are you leaning towards? Has your vote changed? Why?

Republicans: Who’s looking scary to you? Is there anyone up there you’d vote for?

Click here to shoot me an email and we’ll go to war in the comments section.

For the last few days, our macroeconomic expert Graham Summers has been telling us how he believes the Fed is directly intervening in the markets.

(Click the links to read part one and part two.)

But Graham says it’s important to understand that the Fed isn’t buying stocks indiscriminately. It buys four specific stocks to use the financial system against itself.

Sound cryptic? Graham explains everything, and reveals those four stocks, in today’s One Last Thing.

The Financial Times recently reported that according to data from JPMorgan and Lucerne Capital, only 10% of stock market volume comes from actual fundamental stock investors.

The other 90% of all market trading today is generated by passive funds/index derivatives.

Because of this, the Fed knows it only needs a significant percentage of stocks to ratchet higher to get the entire market to rally.

Once these few stocks catapult higher, these automated trading programs will start buying every stock in the index automatically – and that’s what causes the entire market to rise.

Put simply, the Fed doesn’t buy the entire market (all 500 companies that comprise the S&P 500). Rather, it focuses almost entirely on four specific stocks.

You may have heard of them before…

Together, these four companies account for over 10% of the S&P 500.

In order to get the entire market to rally, all the Fed needs to do is get these four stocks to move higher. At that point, the automated trading programs that comprise 90% of all stock market volume will do the rest, buying everything under the sun.

We know that central banks intervene in financial systems. We’ve discussed how both the Swiss and Japanese central banks have staged direct interventions into their markets.

We also know that the U.S. Federal Reserve stages similar interventions ― even if they’re not direct. And that typically, the Fed targets the Big Four: MSFT, AAPL, AMZN, and FB.

Of course, knowing that these interventions exist is one thing. But the only way to act on them is if you know how to spot them.

Knowing in advance when these interventions occur opens the door to massive profit opportunities.

And I’ve found a way to do just that.