Jeff Bezos’s Everything Machine may have started as a humble book store. But in the years since, Amazon has pivoted from selling “food for thought” to “just regular old food for your belly.”

Today, food products (like these mint-chocolate “breakfast bars” I get which I’m pretty sure are just candy but I like them so I don’t want to check) account for 58% of everything sold on Jeff Bezos’s Capitalism Blog.

It’s likely there was a time when Amazon closely monitored what was being sold on its platform. But with 2.5 million third-party businesses selling food on the website, Amazon has mutated into an enormous unpoliceable mess of spoiled baby food and beef jerky that smells like your grandad’s aftershave.

So Amazon has just stopped trying. Allegedly. (I mean, it’s true but my lawyers like me to say “allegedly” when I’m talking about a person who has more money than the entire GDP of Ecuador.)

Scoot on down to the review section of these third-party sellers, and you’ll find customers complaining about products arriving past their expiration dates, with “rancid smells” and “chunky and gross” lumps. 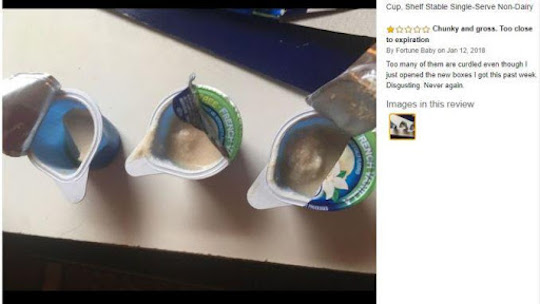 I’m not here to question your life decisions but if you’re buying a 360-pack of coffee creamer from some dude on the internet, you’ve made some bad choices. (Source: CNBC)

CNBC enlisted the aid of a data analytics firm that specializes in the Amazon Marketplace to analyze the site’s 100 best-selling food products and found that at least 40% of sellers had more than five customer complaints about expired goods.

Folks have realized they can make a quick buck buying out-of-date products at flea markets and down clearance aisles and reselling them on Amazon. And the Jeff Bezos Home Domain Grocery is either too big to do anything about it or just happy to take its cut of the fat profits from the sale of the old creamer.

Amazon says it uses a combination of humans and AI to monitor the 22-million comments it gets on food products every week. (But robots aren’t great at detecting chunky yogurt.)

“If customers have concerns about items they’ve purchased, we encourage them to contact our Customer Service directly and work with us so we can investigate and take appropriate action,” said the spokesperson, shifting the responsibility to police its own platform to the consumer.

Sarah Sorscher, deputy director of regulatory affairs at the Center for Science in the Public Interest, told CNBC that lumpy creamer is a red flag for Amazon’s inability to police its own platform and keep its customers safe.

“Expiration dates are a red flag for what else is harder to see,” she said. “If you can’t do something as basic as check an expiration date, then what else are you missing?”

Boeing’s stock (BA) sank 5% this morning after being downgraded, following Friday’s news that Boeing execs had prior knowledge of technical difficulties that caused two aircraft to drop out of the sky and explode.

Credit Suisse cut its price target on Boeing’s stock from $416 to $323, in a note titled Boeing, The Downward Spiral (which is such a fun title for an investment note about a cover-up surrounding the death of 346 people).

“We can no longer defend the shares in light of the latest discoveries, discoveries which significantly increase the risk profile for investors,” the analysts wrote in the note.

The “latest discoveries” the comedians at Credit Suisse are referring to is a series of text messages between two Boeing execs discussing the technical difficulties with the MCAS anti-stall system.

The messages suggest that Boeing execs were well aware of a glitch in the system which ultimately caused the deadly crashes in Indonesia and Ethiopia. (Because reporting stuff costs time and money and it’s such a hassle, guys, don’t get me started.)

“It’s running rampant in the sim on me. I’m levelling off at like 4000 ft, 230 knots and the plane is trimming itself like craxy. I’m like, WHAT?” texted Chief Technical Pilot Mark Forkner, who is as bad at spelling as he is at safety checks.

“So I basically lied to the regulators (unknowingly).” (This guy is a prosecutors dream.)

Captain Jon Weaks, president of the Southwest Airline Pilots Association (SWAPA), said in a statement these messages are evidence that Boeing misled pilots, government regulators, and other aviation experts about the safety of the 737 MAX.

“It is clear that the company’s negligence and fraud put the flying public at risk,” wrote Weaks.

Ralph Nader, whose grandniece was killed in the March crash of a 737 Max jet in Ethiopia, called for the removal of the entire Boeing board of directors.

“It’s not happening at Boeing because the people at the top are in the same pit together,” said Nader. “They don’t want to admit that they really, really performed in a very seriously adverse way to the safety of airline passengers.”

After declining for three sessions in a row, Boeing’s shares near their lowest in more than three months. The stock is down 14% this month and 25% from its record high of $440.62 in March.

SAVE THE DATE: Clear your schedule on Wednesday, October 30th, at about 1 p.m. Eastern.

Because 10-time trading champion Chuck Hughes is about to drop a bomb on everything you know about trading.

His proprietary, self-taught trading system has personally banked him more than $3.7 million in extraordinary real-money profits in the last five years alone.

And for the first time ever… he’s going to reveal his step by step system during a special free online event on October 30 at 1 p.m. Eastern.

Four drug distributors reached a last-minute settlement this morning to avoid going to trial and having all their dirty, opioid-stained laundry aired in court.

This lynchpin trial in Ohio was expected to set the benchmark for literally thousands of upcoming opioid trials in almost every state in the U.S.

(When you conspire to create a nationwide health crisis to sell more drugs, it’s easier to pay to skip the trial and keep the real greasy stuff out of the press.)

The Ohio counties will pocket $215 million in cash from U.S.-based McKesson Corp., Cardinal Health Inc., and AmerisourceBergen Corp. While Israel-based Teva agreed to fork over $45 million in damages.

“The proposed settlement will make significant progress to abate the epidemic by providing resources for and applying funds directly to necessary opioid-recovery programs,” said the prosecuting attorneys in a joint news release.

$260 million will buy Ohioans a tidy amount of Yuengling (or opioid-recovery programs or chili or whatever they decide to spend the dough on). But this settlement won’t scratch the bottom line for companies of this size.

Of course, this is just the first blow to big pharma’s wallet.

There are more than 2,000 opioid-related lawsuits from almost every state tied to the opioid crisis. And paying for them all to “just go away” could bankrupt more than one major pharma company.

The fifth defendant, Walgreens Boots Alliance, didn’t reach a settlement and will face trial at a later date.

Economists Are Uncertain About All This Uncertainty

Anxiety and uncertainty seem to be the favored buzzwords for lazy financial journalists trying to meet a deadline in 2019… and with good reason! (See? I can be nice to those lazy, no-talent hacks, sometimes.)

According to an index that measures uncertainty, created by anxious professors at Northwestern, Stanford, and the University of Chicago, political uncertainty is at an all-time high right now.

The index, which tracks data as far back the far-flung year of 1997, rose to the highest level on record in August of this year. September, the most recent reading, was the fourth-highest month on record.

Those of you who know their history/can read a bumper sticker, probably expected a certain 2001 terrorist attack to be higher on this index than 2019. But, even during the 9/11 attacks, global uncertainty was nowhere near as high as it is now.

As implied by the whole “uncertainty” thing, we have no idea what’s going to happen next.

But investors would be wise to rebalance their portfolios to prioritize low-volatility stocks and increase holdings of cash and assets that hold their value when the market crashes.