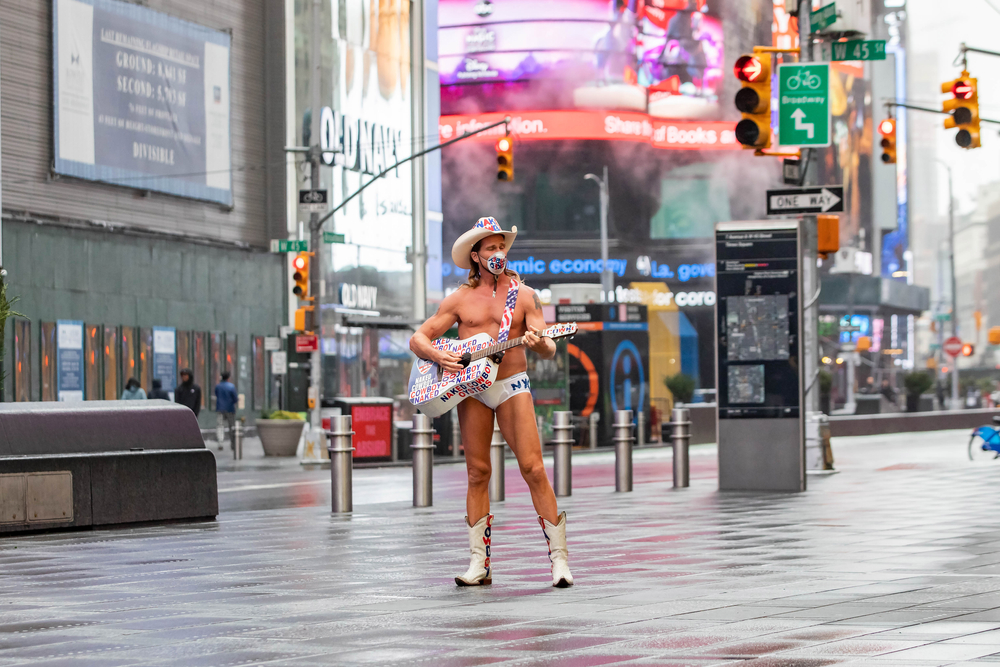 New York is Open for Business

New York City, the epicenter of the US coronavirus outbreak, will start the slow process of reopening today, allow hundreds of thousands of New Yorkers to get back to doing what they do best (standing in line and complaining loudly).

Since the city’s first coronavirus case was recorded exactly 100 days ago, there have been more than 205,000 infections confirmed, with more than 22,000 deaths. At the peak of the pandemic, more than 800 New Yorkers were dying from the virus every day.

New York City was required to meet seven health–related metrics before beginning to reopen, including a decline in total hospitalizations, decline in deaths, increased testing, and to stop talking about how much better New York pizza is. (That last one doesn’t have anything to do with the virus, it’s just very annoying.)

Today, new infections are down to just 500 a day and testing has surged to roughly 33,000 citizens daily. The city believes that with these numbers, its crack team of contact tracers can track and stop a resurgence of the virus before it happens.

(It’s kinda like Minority Report, except instead of three goths floating in a pool, you have thousands of out–of–breath New Yorkers climbing the city’s endless supply of walkups.)

During the city’s initial reopening stage, an estimated 400,000 workers are expected to return to their jobs, making the pizza pie, flicking paint at a canvas with their genitals, and shouting obscenities at passersby from the construction site. 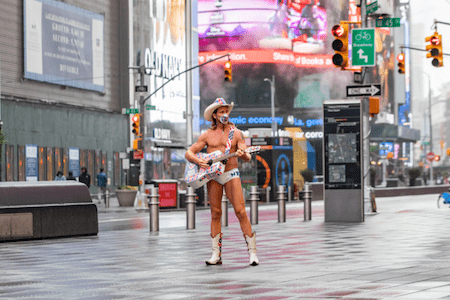 Please remember to wipe down your naked cowboy with disinfectant before you allow him into the house.

Phase one allows for construction and manufacturing to resume. While retail will open in a limited capacity, with curbside service only (which is expected to interfere with the city’s pastime of “I’m walking here”).

As you’d expect, businesses that wish to reopen will be expected to adopt a veritable smorgasbord of new safety regulations.

In addition to the usual party bag of masks, social distancing, and no kissing parties, New York State requires employers to conduct employee health screenings and send staff home if they so much as sniffle.

For the duration of the pandemic, employers are encouraged to relax restrictions on sick leave to encourage staff to stay home and not cause another pandemic.

New York City is the last region in the state to move to phase one reopening. But Mayor and former presidential candidate Bill de Blasio says the city could be ready to move into phase two as soon as early next month.

Phase two would allow for the reopening of barbershops, outdoor dining, and the reintroduction of old Italian men shouting “shut up” from a third story window at two in the morning.

US Jobs Snap Back

The US labor market bounced back with a satisfying “boing” last month, as states relaxed their stay at home orders and businesses started to reopen.

After two months of what experts are calling a “sucky time nobody really enjoyed,” the US economy added 2.5 million jobs in May.

I mean, I say “added” but we’re talking about jobs that already existed that were effectively put on hold for the duration of the pandemic. It’s not like Elon Musk invented a new kind of job that we’re suddenly all doing.

May’s figures represent the most jobs added in a single month since we started recording that sort of thing in 1948. (Before then, the government would just estimate based on how long the bread line was on the way to the office.)

Despite the record recovery, employment is still down 20 million jobs since February, when this whole pandemic thing was just a China thing that couldn’t possibly make its way to the US.

The jobless rate fell to 13.3% from April’s post–World War II high of 14.7%. (It’s never good when you need to go back that far to illustrate how crappy things are.)

The jobs report boosted hopes for a speedy economic recovery from the very weird time indoors that we should never talk about when this is all over.

“This is definitely in the right direction and suggests the U.S. economy may be faring better than some of those worst–case scenarios,” Economist Lindsey M. Piegza of financial firm Stifel Nicolaus & Co. told the Wall Street Journal.

“But it remains to be seen if this is indicative of an ongoing positive trend or if this reflects the bare minimum of the labor force needed to reopen the economy.”

Yet, like so many grandmothers eaten by wolves, we’re not out of the woods yet. With widespread bankruptcies and closures, many of the jobs that existed before the pandemic simply do not exist anymore. While the prospect of a second viral outbreak is ever present and threatens to undo all of the good accomplished thus far.

Chuck E. Cheese, the last place on earth you’d want to visit during a viral pandemic, is reportedly scrambling for cheddar to avoid imminent bankruptcy.

Kids’ favorite purveyor of okay pizza and germs approached lenders for a $200 million loan, according to people familiar with the matter who spoke to the Wall Street Journal. 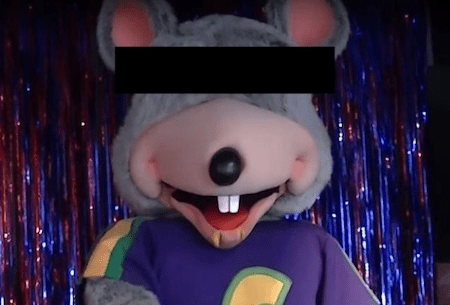 Reportedly, the discussions are taking place under a ticking clock, with a $1.9 million quarterly loan payment due at the end of the month. (Maybe it’s time to get Chuck E.’s Make Believe Band back together for one last big show.)

On Friday, the company (which is hurting bad for cash) said it would pay nearly $3 million in retention bonuses to its three top executives.

Paying these bonuses during a bankruptcy is illegal, so the Chuck E. probably wanted to get it out of the way before the crap hits the creepy animatronic robots.

(Of course, it would never occur to the execs to not take their bonus as the company is run into the ground.)

Before the Indoor Times, Chuck E. Cheese was growing at a healthy clip. But all 610 locations had to be closed, as America’s ball pits became even more of a health hazard than they usually are.

With its germ factories all shut, Chuck and pals have been burning through cash like the Make Believe Band burns through band members (RIP Jasper T. Jowls). The CEC announced the company was exploring bankruptcy in April, like five minutes after everything closed.

Or so the headlines would have you believe.

To the untrained eye, tech is where you want to be right now. But as our macroeconomic expert Graham Summers will tell you, there are stocks that are vastly outperforming big tech.

Graham reveals how to spot these mega movers in today’s one last thing.

On Friday, I noted that capital was beginning to rotate into new sectors in the market.

Rotation occurs when capital begins to move en masse from one sector to another. Typically, this involves money shifting from a sector that has been leading to one that has been lagging.

In our recent market climate, this means money shifting out of tech stocks and semiconductors and into things like cruise lines, theme parks, financials, and the like.

The thing about rotation is that it is difficult to see on a standard chart. As a result, many individual investors miss out on these shifts… which means missing out on massive opportunities.

Take a look at the below chart showing the FANG companies (Facebook, Apple, Amazon, and Google as depicted by the red line) vs. JPMorgan (JPM).

It is obvious that big tech is where you want to be. Look at the massive difference in performance over the last two months! 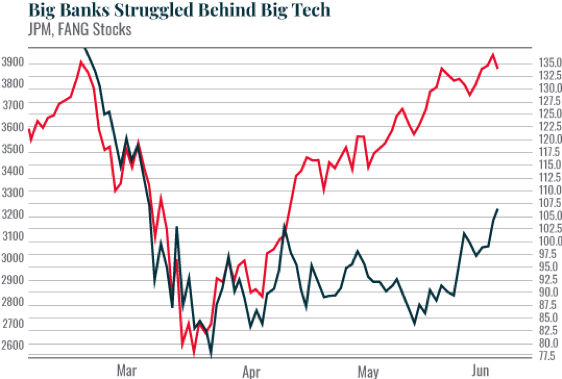 However, this chart is deceiving.

Look what happens when you change this chart from showing prices to showing percentage performance gains, starting with March 23, 2020 (the date the markets bottomed).

Here again, FANG stocks are in red, JPM is in black. 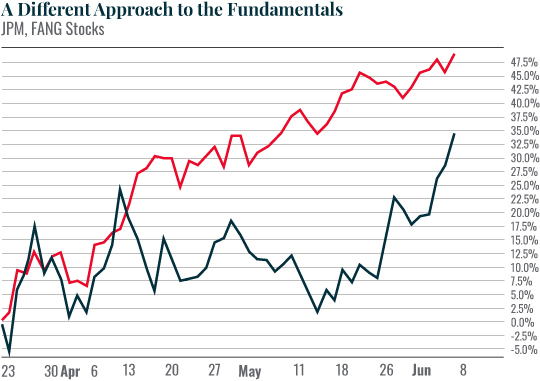 Suddenly, the outperformance isn’t that dramatic. In fact, it’s clear that JPM has gained DRAMATICALLY more since mid–May. While the FANG stocks have been moving in a gradual uptrend, JPM has suddenly EXPLODED upwards.

Learning to Outperform the Market

Finally, there’s another trick I use to catch major rotations, called “ratio work.”

Ratio work consists of comparing the performance of two asset classes by turning them into a ratio.

Let me give you an example.

Looking at this chart, it is clear that FANG stocks outperformed JPM from late 2019 until May 2020 (the chart was in a clear downtrend). Then, this suddenly reversed in mid–May, with JPM DRAMATICALLY outperforming FANG stocks. 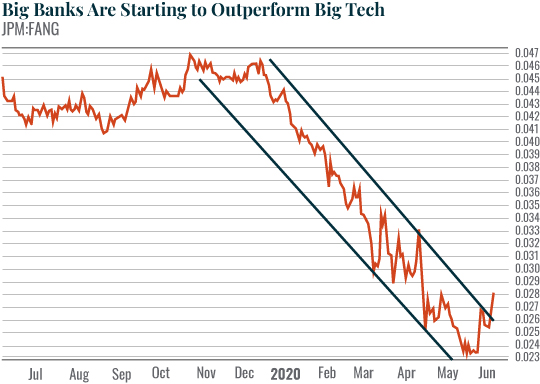 Using this kind of ratio work, you catch major rotations when they start.

I did precisely this in late May, alerting subscribers of my Strategic Impact newsletter that we were about to see several investments explode higher based on the economy reopening.

One of them is already up 28%. The other is now beginning to catch a major bid as well.

To learn more about investment ideas like these and secure your opportunity to see how to profit… click here.

We received more email responses to Friday’s e–letter than any other issue of One Last Thing. Rest assured, I’m going to read them all but it’ll probably take some time. For now, I’ve cherry picked an easy one, cause it’s Monday and I want to talk about food and beer.

Since you asked for feedback, Shane, I’ll provide some. I thought your article was spot on — and you got the tone right. It was exactly what needed to be said, and you said it well.

I’m also enjoying your weekly podcast — the only podcast there is — and have shared it with friends and neighbours who also appreciate your writing.

Now, for something completely different –– just wanted to know if you’ve had the chance to visit the Guinness brewery in Baltimore, and if so, do they make a proper stout? I heard they were making light beer for Americans. Personally, I don’t like that pissy stuff and want to drink a proper dark, heavy, warm stout when I order a Guinness.

Usually at this time of year, I’m in a land far, far away, where I can relax in the back garden drinking my favourite Guinness (and sometimes Pimm’s). But this year my summer has been cancelled, so I’m stuck in Baltimore looking for a place that serves proper fish and chips, along with the much missed Guinness. Please let me know if you’ve stumbled across anywhere you could recommend.

Many thanks and stay safe — Rosalyn

Hey, Rosalyn. From context clues, I’m guessing you take your vacation in… Ireland?

I’ve mentioned here before that I have relatives in Ireland. You’ll usually find me in Cork City (Conde Naste’s 3rd Friendliest City in the World 2017) round Christmas time.

If you’re asking me if there’s anywhere in Baltimore that does a proper Irish fish and chips — well, there’s lots of great food in Baltimore. But you won’t find an authentic fish supper here. At least, I haven’t found it. The batter is never quite right and I’ve never seen anything that comes close to the Irish chipper fry.

The Guinness brewery is fine for a visit. But as far as I know they only make their weird beers there. The real stuff is still imported from Dublin. They do a grand pint of it in Delia Foley’s which is the best Irish–themed chicken wing bar I’ve ever been to. If you can get your hands on it, Left Hand Brewing’s Milk Stout Nitro isn’t a bad sup.

Cheers for the support, Rosalyn.