“We will seek friendship and goodwill with the nations of the world,” Trump said during his Inauguration speech, “but we do so with the understanding that it is the right of all nations to put their own interests first. We do not seek to impose our way of life on anyone, but rather to let it shine as an example. We will shine for everyone to follow.”

When Trump was elected as president of the United States, many in Russia cheered. It was feared that the Deep State wanted to put Hillary in — and take Putin out.

One Russian mining company even commemorated his presidency with a collection of $10,000 silver coins. Russian grocery stores were filled with Trump edition sugar cubes, charcoal and hamburgers. 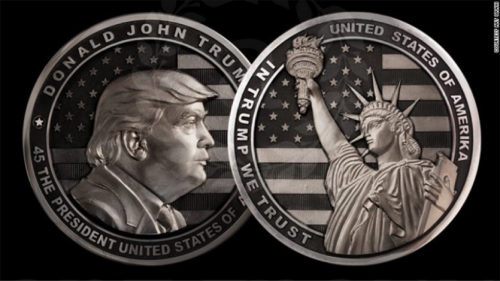 “Trump is a huge advantage for Russia,” Muscovite Gleb Samorukov told USA Today. “It’s clear Trump’s willing to figure out some of the problems we have between our two countries.”

According to a survey conducted by the (state-run) Russian research center VTSIOM, a little under half of those surveyed said they would’ve voted for Trump. A third said he would likely go on to become one of the best presidents in history.

But, it seems, the sands are shifting a bit. Trump, many Russians are already saying, isn’t what was expected. He’s chugging along the same disastrous track as his predecessor.

Before Trump took office, Obama poked the bear by moving U.S. troops near the U.S. border. Then, just recently, the U.S. Army’s European headquarters in Wiesbaden, Germany, announced that 1,000 troops will be sent to northeastern Poland at the end of March.

“US Vice President Mike Pence,” the German Deutsche Welle reported last week, “sought to reassure Baltic and Black Sea nations, especially Ukraine, of continuing US support in the wake of Russia’s seizure of the Ukrainian peninsula of Crimea in 2014.”

“President Trump has made it very clear that he expects the Russian government to de-escalate violence in the Ukraine and return Crimea,” White House spokesman Sean Spicer said at a daily news briefing last Tuesday. “At the same time, he fully expects to and wants to get along with Russia.”

Russia’s response?  “We do not return our territories,” Foreign Ministry spokeswoman Maria Zakharova shot back in a routine media briefing. “Crimea is a territory of the Russian Federation. That’s it.”

This darkening of the mood ring can be seen most prominently in Russian social media. One headline from the popular media outlet Russkaya Fabula is getting a lot of buzz at the moment:

“Is Trump Already Out of Fashion?”

Russian netizens are pounding out scathing criticisms of the perceived back-turner. One picture of dumpster graffiti taken outside of Moscow last year is making its rounds, too. 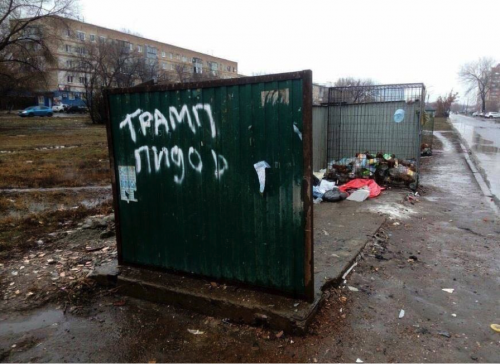 According to a Russian friend: “It says ‘Trump is gay,’ but in a rude, cursing way. Not in the literal sense, though. In a calling names kind of way.”

[Our Russian friend also, by the way, says the “Russia loves Trump” narrative has been fairly overblown: “…saying that a lot of people like Trump in Russia, would probably not be true. Most (maybe like 2/3 of the population or more) just don’t care. The rest 1/3 would probably divide in 65% for Trump and 35% against.”]

The Celebrity Potato Strikes Back

China, on the other hand, believes it has had Trump figured out all along.

They’ve said he has a “big mouth.” And, at one point, called him a “lunatic.”

According to Global Times and Xinhua, he’s a perfect example of why American democracy doesn’t work. (Can’t argue there.)

Relations with China, then, are a tad more tenuous.

Last week, you might recall, we spoke about Steve Bannon, Trump’s chief strategist, and his obsession with William Strauss and Neil Howe’s book, The Fourth Turning.

Bannon has taken the book’s premise as prophecy — that America is entering a full-blown crisis stage. Which, of course… look around: You don’t need 415 pages to tell you that.

Problem is, attached to this belief is another one which, like a little Golem tulpa, sits atop his shoulders and whispers in his ear: “Look out. Look out. A big, bloody war with China is coming.”

“We’re going to war in the South China Sea in five to 10 years,” he boldly predicted in March 2016. “There’s no doubt about that.”

“The cause of war is preparation for war.”

Especially poignant given Trump’s recent announcement on nuclear weapons. He’s going to make America’s nuclear armament great again. We will be, he says, the “top of the pack.”

“I guess the 2,600 we’ve got aren’t sufficient to blow up the world enough times,” Jack Perry writes on the Lew Rockwell blog. “By golly, if the Russians can blow up the world fifteen times, we better be able to blow up the world at least twenty times! How’s it going to look, with the world reduced to dust and knowing it was all for nothing because the Russians destroyed the planet better than we did? That’s simply not American! How can we look in the mirror knowing we can only destroy the planet to the tune of twelve times over and someone else can do it fifteen? That’s embarrassing! Every American ought to be proud to pay more taxes so we can close this Planetary Destruction Gap!”

To elaborate on the big, fat “Chinese threat,” we invite Jim Rickards to the show to talk about four “flashpoints” which could set off a war with China.

The South China Sea, unfortunately, is only one. (We’re looking at you, Kim Jong Un… ahem… sorry for your loss.)

4 Flashpoints Where War with China Could Start

In the world of geopolitics, broadly defined to include defense, military, intelligence, diplomacy and various the aspects of statecraft in the international arena often intersect with the world of global capital markets.  The sphere of global capital markets include stock, bonds, derivatives, gold, commodities, foreign exchange, etc. These those two worlds are not completely independent, and often converge.

The point of intersection is getting larger, as are the flashpoints. Think of it as two circles that start out apart. They get closer and closer. Well, suddenly they come together and there’s an intersection. They keep converging and the intersection gets larger. It’s actually difficult to think of an international economic issue that doesn’t have a geopolitical aspect and vice versa.

It is difficult to think of a major geopolitical issue that doesn’t have some economic or financial aspect to it. It’s important recognize that these are not completely separated worlds. These are two worlds that are converging where you cannot understand one without the other.

The first thing is the number of hot spots in the world is growing. That means the potential for conflict and war, where a situation is sufficiently dangerous enough that you could not rule out a war. These threats include a shooting war with China, a military theatre with multiple dimensions from the battle space, a possible cyber war, or even a financial war.

As I have written about prior, geopolitics and China have these regional convergences that continue to grow (CLICK HERE for prior further geopolitical analysis on China).

The South China Sea is an area of great importance. When just looking at the geographical area you’ll see two things.

First, it’s a huge space. Second, it’s surrounded by 6 countries, all of which have some claim on it, except for one. China claims, “We own the whole thing.”

They maintain a claim to the entire South China Sea. That means they’ve got potential confrontations with all the other states around it. There are two states in the region have the most potential for war with China. One is the Philippines and the other is Vietnam. The Philippines is an  ally of the United States and holds a treaty between governments, meaning it’s not just a regional power but an area where the U.S has long strategic interests in.

The United States has a Mutual Defense Treaty with the Republic of the Philippines standing since 1951 that dictates that if either of our countries are at war, or attacked by an external force, we’ll be in alliance. Newly appointed Secretary of State, Rex Tillerson has re-emphasized that commitment. With all of that in mind, we are not seeing China back down.

The Chinese continue to build artificial islands, but they’re not just creating islands they’re constructing air strips on them and landing aircraft on them. While China only has one aircraft carrier, which is fairly primitive by our standards, they also have submarines and use these forces to patrol that region.

The U.S. has now sent the USS Carl Vinson (CVN-70) is the third United States Navy Nimitz-class supercarrier, and its strike group to the region. Aircraft carriers don’t travel alone. That battle group is now in the South China Sea ready to confront China and maintain U.S interests and international obligations. There’s a real potential for war with China there.

The second hot spot takes is further north to the East China Sea, located between the Sea of Japan and the South China Sea. Where a flashpoint in the region is over a dispute regarding the Senkaku Islands. Those select islands are uninhabited but are currently claimed by both Japan and China. They consist mostly of major rock formations but hold a significant amount of territory that is strategically located along major sea lanes. As of last year, the Chinese Navy has 303 naval combatant vessels that includes over 70 large combatants. To compare that, the Japanese Navy has an estimated 67 vessels. While the Japanese may have better technology, they have serious ground to make up.

As the U.S. seems to be backing away in certain aspects, sentiment in Japan could push them toward a greater buildup of forces. The days of relying on the U.S. defense umbrella and not taking care of their own defense may be over. As China continues to be aggressive and expand, the expectation is for greater Japanese military growth.

Another hot spot is North Korea.

continues to have various missile programs in continuation. One is intercontinental ballistic missiles, which are not fully developed but continue to get closer. The other is a short range and intermediate range missile technology.

The third aspect that makes North Korea a hot spot is that they have exploded what are labeled nuclear devices which are not quite the same as nuclear warheads. It’s just a small step being able to weaponize. That weaponization threatens the possibility of nuclear devices being created small enough to put in a warhead.

As North Korea moves forward a real and serious threat brings the situation closer to the point of war. The question is will China help us out with North Korea? China recently announced that they’re not going to buy any coal from North Korea for the remainder of the year. That’s putting economic pressure to the North Korean government. This highlights a good example of how the economic and geopolitical world can come together.

A fourth hot spot that not many are discussion is focused on India and specifically the Himalayas. China continues to expand its presence there. The Indians are very mindful of these strategic advances by China. To reference, India and China had a shooting war as recently as 1962 and a number of isolated skirmishes since. Currently, China is building a string of dams in Tibet to control those headwater in the region. This would allow them the ability to “turn off” the water in the Southeast region.

All of these potential conflict regions have one specific thing in common. China has dangerous hegemonic ambitions.

China may not want to take over the world, but they do want a sphere of influence that covers everything from the Western Pacific to Central and Southeast Asia. These are all major flashpoints and all have the potential for war.