To invade or not to invade?

This is the question on everybody’s lips right now.

Should President Trump invade Venezuela and wrestle control away from Maduro and his military-backed dictatorship? Or should the U.S. stay on the sidelines and take on a more diplomatic role?

(Click here for our full write-up on the situation in Venezuela and find out why invasion is suddenly in the cards.)

Retired Air Force General Douglas Fraser says there’s “no good reason” for the U.S. military to intervene. But President Trump, who has floated the possibility of a “military option” in the past, says that “all options are on the table.”

Clearly, a decision like this is not to be taken lightly.

In a recent interview, chess grandmaster Gary Kasparov talked about the layers of planning needed when deciding on military intervention overseas.

And what he had to say might surprise you.

In this interview with James Altucher, the chess legend talks about fleeing Putin’s Russia, the Syrian conflict, and when violence is the only answer.

All this and more, in today’s issue of Money & Crisis.

P.S. We’re headed straight for a recession this year.

Which means we need a strategy for making easy and reliable money even if the stock markets tank.

A strategy that’s safe, profitable, and predictable… like this one.

Click here to find out how to use this secret strategy and start making $3,000 a month in extra cash.

The Russian police beat him.

He was running for president.

“Running for president in Russia means making a statement,” Garry Kasparov said on my podcast. “Back then, protesting Putin would get you five-10 days in jail. Now it’s five-10 years.”

I asked him, “If you went back would you be in trouble?”

“Trouble is an understatement.”

“Look, most of my friends and allies who marched with me, they’re either in exile like myself, in jail or dead. It’s a dictatorship that eliminates any potential threat. And as we know, Putin’s reach is not limited to Russia. Many of his opponents were hunted and killed outside of our country.”

I was in 11th grade when Garry beat Anatoly Karpov in the World Chess Championship.

“My victory was symbolic,” Garry said. “I was 22. And I won. I was half Armenian, half Jewish. Many people still say, ‘Oh, for us, it was a signal. If Karpov could be beaten by Garry Kasparov, that’s a chance for the country to change.'”

He couldn’t understand the symbolism at the time.

“But now, 33 years later, I can feel that was my big contribution. Simply winning at the chessboard gave great hope to millions and millions of people that change could happen.”

Karpov symbolized communism. Garry symbolized a potential free world… hope for some was a threat for others.

He explained the obstacles:

“You cannot get on the ballot. You cannot raise money. You can’t hold political rallies.

Running is all about demonstrating that Putin’s Russia is anything but democratic.”

And he’s still proving that today.

He recently published a collection of essays. He and the other essayists wanted to call it “The Federalist Papers 2.0”.

But the publisher said “no.”

“You should self-publish,” I said.

The book is called The Fight for Liberty: Defending Democracy in The Age of Trump.

1. NO COUNTRY IS AN ISLAND (EVEN THE ISLANDS)

Normally, I’m against all wars. I wrote about this years ago. And people sent me death threats.

Then I read Garry’s essay. He changed my mind. “I realized, from your essay, that it’s better for the U.S. to get involved early because…”

He’s my perfect match when it comes to podcast interruptions. I interrupt all the time. I tell people, “I’m an interrupter.” But they never interrupt back.

It’s like the chess clock is ticking. We each have a turn. You have to think fast. His time hits.

“OK, but how can something in Syria affect me? Let’s play it out.”

This is Garry’s skill. He sees through move 1, 2, 3, 4 and so on. He sees the whole global game. He sees Putin does X, so Syria reacts. Then the U.S. draws a line. And either defends freedom. Or just talks about defending freedom (with no action). A crisis erupts. People die. And flee. They want prosperity.

Then a new crisis: refugees.

Where do they go?

He gave me a real example:

One million go to Germany. Which leads to the resurfacing of the neo-Nazi party. “AFD.” It’s the second largest political party in Germany.

“They had one electoral success after another,” Garry said. “The only reason? Refugees. So that’s how it’s connected.”

“All of a sudden, we are subjects for manipulation,” Garry said. “And it’s so easy now. Because there is only one way to tell the truth. And there are zillions of ways to lie — especially if you have access to so many channels of social media.”

I still didn’t get why this mattered to me. Or my daily life.

Why would I care if Russians hated Americans?

But it goes back to the first point. If we don’t value democracy and see that it wins… it won’t. 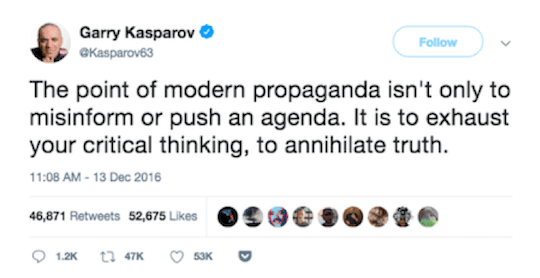 We’re not at war with Russia. We would know.

Look at Russia’s relationship with Syria. Garry calls this a “hybrid war.”

Putin doesn’t have the army necessary to beat us.

“But he doesn’t have to,” Garry said. “He has enough military capacity to help Assad [Syria’s president]. And to take over Syria.”

But what are our democratic principles? When do we step in? And when do we not step in?

Because there’s nothing I can do. The president isn’t calling me, “Hey James! What countries do you think we should help?”

But Garry thinks I should care.

We looked at history:

“Are you better off now?” Garry said. “That’s the question. 500,000 people dead in Syria. Millions of refugees. Neo-Nazis in Europe on the rise. That’s the result of you walking away.”

I started to see chess in everything. In the conversation, in the world, everywhere.

Garry’s move: “You say ‘Afghanistan was a failure,’ but there was no second 9/11. One of the reasons? Probably because the bad guys were busy fighting Americans elsewhere.”

My move: “But you could argue it’s because, in the ’80s, America funded Osama bin Laden to fight the Russians.”

Garry’s move: “How far back do you want to go? To Stalin? To Hitler? To FDR? To Lincoln? Look, things are connected…”

He told me that America failed to offer any sort of world vision for years. We stopped leading.

“If you don’t offer any idea for how to live in the future, somebody else will,” he said.

It was the first time a computer beat the human mind.

But… the mind to beat was Garry’s.

P.S. I am sure by now you have heard people predicting for 2019.

And in fact, many think it’s coming real soon.

If there is a recession, you’ll need a way to make money that is both easy and reliable.

The kind of strategy where it won’t matter if the S&P 500 goes up or down.

It won’t matter if President Trump shuts down the government.

And it won’t matter if you’ve never invested in the stock market before in your life.

With this simple strategy, anyone can make $3,000 in extra cash every month.