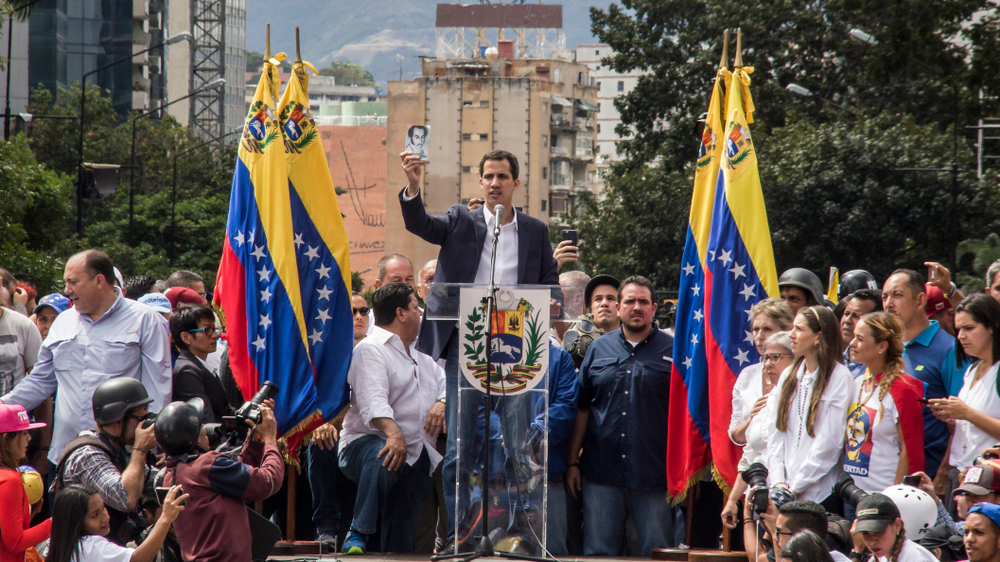 The trucks carrying emergency food and medicine have made it to the Colombian-Venezuelan border… but they will go no further.

Cases of medicine. Bags of rice and beans. Toiletries and other daily necessities the people of Venezuela have been denied access to.

Literally millions of dollars in humanitarian aid just sitting there gathering dust while the folks on the other side of the border starve.

The aid, which was provided by the U.S., is being blocked by Venezuelan troops acting on the orders of embattled president Nicolás Maduro.

Three weeks ago, relative unknown Juan Guaidó declared himself the de facto president of Venezuela, in an attempt to wrestle power away from the growingly authoritarian Maduro.

[Click here to read our in-depth breakdown of the crisis in Venezuela.]

Despite the fact that his people are starving, Maduro has officially rejected the aid, calling it a “Trojan horse.”

Since the food and medicine is coming from the U.S., and the U.S. recognizes Guaidó as the true leader of Venezuela, Maduro believes it will only serve to win support for his rival and grease the wheels of regime change.

He might be right, of course. The U.S. has a storied history of meddling with regime changes in Latin America — from the CIA backed contras in Nicaragua to plans to assassinate Maduro’s predecessor and mentor, Hugo Chavez.

But the fact remains that the people of Venezuela are starving. And Maduro has become a brutal, authoritarian dictator.

Meanwhile, behind the headlines, the U.S. is using financial warfare to further undermine Maduro. Jim Rickards goes in depth in today’s issue and reveals why this is a warning shot for anyone that owns gold.

P.S. Governments around the world are secretly preparing for the next major crisis.

The global elite has already hoarding cash and hard assets.

It will be the average tax payer who suffers most — unless you act now.

Don’t Trust Your Money to the Government

Wars are raging all over the world, yet relatively few are traditional shooting wars. Most are financial wars involving banks, payment systems, capital markets and gold.

The U.S. has placed an embargo on Venezuelan oil exports and has threatened to seize any money received by Venezuela for their oil.

The only exception is for oil shipped directly to U.S. refineries where the sales proceeds would be placed in escrow accounts for the benefit of the people of Venezuela once a replacement president for Nicolás Maduro is installed.

Maduro is fighting this by turning to the Russians. Venezuela has informed buyers of its oil to deposit proceeds to an account at Gazprombank AO, an entity controlled by Russia’s largest energy company and indirectly by Russia itself.

That account is presumably beyond the direct jurisdiction of the U.S. authorities.

But here’s the danger: This war could easily escalate to the point where the U.S. imposes secondary sanctions on parties that do business with Gazprom.

It’s not clear how much this financial war will escalate and how it will end. What is clear is that financial warfare may be more destructive to a target economy than bombs and is definitely here to stay.

Venezuela stored 14 metric tons of gold in the Bank of England, one of the two largest official depositories in the world (the other is the Federal Reserve Bank of New York; both the BOE and the New York Fed have more gold than Fort Knox).

Venezuela requested that the gold be returned. No doubt, they intended to pledge it to Russia or China in exchange for cash. But the Bank of England reneged on its custody agreement, froze the gold in place and said they would hold it in trust until the appointment of a new president of Venezuela in place of Nicolás Maduro.

The BOE, like all central banks, is the government thinly disguised as a bank.

But individual gold owners should take heed of this example.

What’s the safest way to store physical gold bullion? Most investors would say that the safest place was in a bank vault.

What could be safer, right?

Well, like central banks, regular banks are controlled by the government. Both are subject to government declarations including account freezes and confiscation.

And while individual investors are not the subjects of financial warfare like a nation, the BOE’s actions indicate how risky it is to trust governments when it comes to money.

This latest example is clear-cut evidence that when you put your gold in a bank vault, it’s not your gold anymore — it belongs to the bank and they’ll only give it to you if they feel like it.

The lesson is to store your gold in a secure nonbank vault operated by Brink’s, Loomis or another high-quality provider. If you store gold in a bank, you may never see it again.

When I was in Switzerland recently, the private vaults were adding capacity because customers were pulling their gold out of Credit Suisse and Deutsche Bank.

Even Your Money Isn’t Safe in the Bank

It’s not just gold. The same government controls also apply to money in banks. In the event of a banking crisis, the government could use your money to bail out your bank. But instead of being a bailout, it’s a bail-in.

A bail-in is different than a bailout. A bailout is when the government uses the printing press and taxpayer money to save a financial institution. All the people who have transactions with this financial institution, whether they are depositors, bondholders, etc., are preserved. They all keep their money.

In short, they’ll use the money already in the bank, whether it’s from depositors, bondholders or equity holders, and use that money to repair the balance sheet.

Editor’s note: For more of Jim’s invaluable insights into a developing global financial crisis, grab yourself a copy of his new book The Road to Ruin: The Global Elites’ Secret Plan for the Next Financial Crisis.

For a limited time, The Road to Ruin is free to readers of Money & Crisis. Click here to get a hardback copy delivered straight to your home.