This investigation has been rumored to be in the hopper for a long time. But even as recent as last week, sources could only confirm the involvement of “more than 30” attorneys general. (Technically, 50 is more than 30, so the government insider who leaked the information still wins the washing machine.)

The bipartisan group includes attorneys generals from 48 states as well as the District of Colombia and Puerto Rico.

If you’re wondering who’s conspicuously missing from the most boring Expendables-style team-up, look no further than California and Alabama.

Wherefore art thou Calabama? Google has been one of the top contributors to California Democrat Xavier Becerra’s past election campaigns for attorney general. It’s no surprise he’s a no show. Meanwhile, all of Alabama is too busy with hurricane prep to invest in a lengthy antitrust campaign.

The investigation will be led by hilarious buddy cop team-up Texas Attorney General Ken Paxton (R) and Washington, D.C. Attorney General Karl Racine (D). It will be focused on Google’s advertising platform, rather than its search engine business (which is only not a monopoly because my elderly parents have come to love ASK JEEVES like a son).

“We have 50 attorneys general from across the nation who are involved in this investigation that we’re leading from Texas,” said Paxton on the steps of the Supreme Court yesterday.

This isn’t the first time Google has come under fire for its stranglehold on online advertising. The EU has fined the company three times for violating competition laws, totaling $9.3 billion (or 8.2 billion Merkel bucks) in fines.

The attorneys general emphasized that this is an independent investigation. But in a call with reporters yesterday, Missouri Senator Josh Hawley (R) said he believes this will be the kick in the pants federal investigators need to launch their own investigations.

“I suspect it will spur on federal investigators who will see the states are moving and being active and who will feel compelled to do the same,” said Hawley.

Shares of Google parent company Alphabet fell 0.9% after the announcement but recovered most of those losses by the end of trading.

If you’ve been reading One Last Thing for a while now (you should probably see a therapist), you know we’ve been predicting this government crackdown on big tech for a while now.

According to our analysts (and some big-name futurists we share a coffee machine with), this is the end of the Wild West Days of the internet. (*Sadly puts away cowboy hat and sarsaparilla*)

There’s a brand-new digital infrastructure in the works and it’s based on a revolutionary technology. This tech has already minted at least 23,943 millionaires. But according to a study from MIT, it’s going to reach “critical mass” in 2019.

To find out how to profit from this historic shift before it’s too late, click here for a special report.

Robots at the Drive-Thru: McDonald’s Goes All-In on McTech

McDonald’s announced today a deal to acquire AI company Apprente, thus fulfilling a decades-long dream to turn all its employees into brainless robots.

Apprente is a Silicon Valley-based company (in case you couldn’t tell by the equal parts pretentious/meaningless name) founded in 2017 to create speech recognition tech for drive-thru orders.

The world’s largest burger chain says it plans to integrate Apprente’s AI tech into all its drive-thrus, order kiosks, and mobile app.

(Ten bucks I have to write the headline “McDonald’s Apologizes for Spying on Customers’ Private Conversations” within a year.)

This is just the latest development in an effort to get “all tech-ed up” and grow the spooky clown’s presence in Silicon Valley. 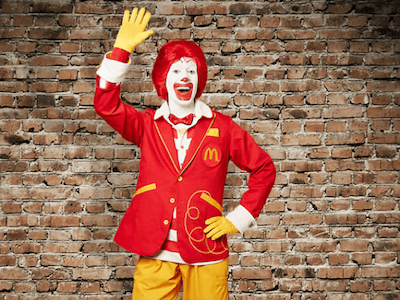 The modern redesign of Ronald McDonald updates the iconic character so he can be hated by people of all generations.

Earlier this year, the “home of the Big Mac” also became the home of Dynamic Yield, a machine-learning company that specializes in personalization and decision logic technology (using algorithms to trick your brain into buying more burgers).

According to people familiar with the deal, McDonald’s dropped more than $300 million on the tech company, making it the burger restaurant’s biggest deal in 20 years (excluding the McRib).

McDonald’s has already deployed Dynamic Yield’s tech in more than 8,000 U.S. drive-thrus. Those electronic menus now respond dynamically to time of day, weather, and traffic to tempt the customer into spending as much money as possible. (And yet they still can’t keep the ice-cream machine working.)

The McDonald’s Corporation stock (MCD) is up about 22% this year but dropped sharply following today’s announcement, falling to a 3% loss at time of writing.

Trump Swoops in to Save North Carolina Special Election

President Trump made a campaign appearance in North Carolina last night in a last ditch effort to rescue a Republican Win for tonight’s special election (and remind his supporters that the Dems hate America and the world will explode if they vote for them).

Trump flew on down to the Tar Heel state to back Republican Dan Bishop, who is going head to head with Democrat Dan McCready in a special election for the 9thcongressional district.

“What makes this election so special?” I hear you ask.

(What’s that? Now, I’m also hearing you say: “You’re very good-looking and I want to give you lots of money.” Wow, you’re too kind.)

Well, we just recently held an election for this seat in November of last year. MaCready lost that election to Republican Mark Harris. But Harris was disqualified after it was discovered his campaign used an illegal ballot harvesting method.

The 9th is a historically Republican district, but the Dems have been able to leverage the voting scandal to energize the local voting base. It also helps that Harris is about as close to the middle as you can get without having to sit on the other side of the aisle.

Harris is a Marine Corps vet who doesn’t support “Medicare for All” or an assault weapons ban. He’s publicly stated he’s not a fan of Nancy Pelosi. And even with voting fraud working against his favor, he came in within half a percentage point of winning the last election.

A Harris win would give the Dems a stronger foothold in the 2020 election. Which is why the Republicans broke out the big guns.

President Trump briefly voiced his support for Bishop before pivoting hard to an all-out attack on the Dems.

“Tomorrow is a chance to send a clear message to the America-hating left,” the President told the crowd.

“You don’t have any choice. You have to vote for me. What are you going to do: Put one of these crazy people running? They are so far left.

“Tomorrow, right here in North Carolina, we take the first steps to firing Nancy Pelosi and taking back the House.”

Trump’s support might give Bishop the boost he needs to take this one home tonight. But a GOP strategist who’s been following the race closely told the Hill this morning that “It’s not looking good.”

This time tomorrow, we’ll know the results of the election. But I’d like to hear from some folks on the inside on this one.

Any Republicans or Democrats in North Carolina voting tonight? What’s the feeling in the air? Who should win? Any folks considering crossing party lines? Why?

Shoot me an email and we’ll discuss it in the Readers Comments section tomorrow. 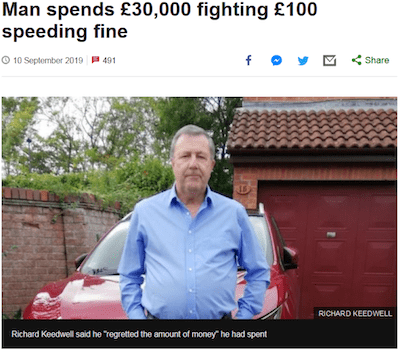 As we were putting the finishing touches on today’s issue, President Trump suddenly announced that he had fired his national security adviser John Bolton.

We’re disrupting our usual discourse to bring you everything we know about the incident so far.

We’ll be back with our regularly scheduled programming tomorrow.

In a series of tweets (of course) shortly after lunch, President Trump announced he had met with Bolton last night and told him that “that his services are no longer needed at the White House.”

He went on to say that Bolton had handed in his resignation this morning and that he would be appointing a new National Security Adviser next week. 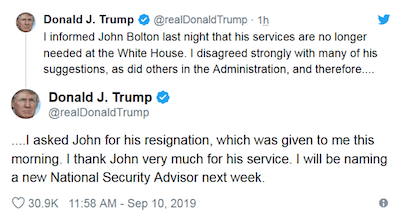 The announcement of his resignation apparently came as news to John Bolton who tweeted out a confused response to the president’s tweets shortly after.

Bolton’s “involuntary resignation” comes hot on the heels of a controversy surrounding a canceled meeting with Taliban leaders about a potential peace treaty with the U.S.

The peace talks were scheduled to take place at Camp David over the weekend. But on Saturday morning, Trump announced that he had canceled the meeting after a Taliban attack killed 12 people last week, including one American service member.

According to inside sources, Bolton was vehemently opposed to the meeting taking place and has been a constant hindrance to negotiations which have been going on for more than a year now.

The president has said that Bolton had nothing to do with canceling the weekend’s peace talks. But it’s possible that the national security advisor and the president butted heads over the weekend concerning talks going forward.

We’ll have more on this story as it develops.