Bitcoin surged above $9k yesterday, officially shifting us into the your-hairdresser-wants-to-talk-about-bitcoin phase of a crypto bull run.

After some quick-fire selling, the old crypto queen managed to get a hold on its rapid gains and has been trading in the region of $8,700 since.

At $9k, bitcoin was up 140% from the start of the year. The question on everyone’s lips right now is: “Are we about to enter a second crypto buying frenzy?” (Also, how do I get this question off my lips? It’s making them dry.)

It’s likely we’ll see a sizeable correction before we hit $10k. The financial experts are predicting a 30% correction, which would bring us back down to $6k.

But, as fund manager Jehan Chu told Bloomberg this morning, bitcoin could go as high as $30k after that. Which means a whole new generation of annoying bitcoin millionaires. (You’re rich because your weed dealer told you to buy bitcoin in 2015, Daryl. That doesn’t make you a financial genius.)

Chu says that the next bull run will be driven by the mainstream adoption of cryptocurrency by some of America’s biggest companies.

“You don’t have to take my word for it. It’s Facebook, it’s Jamie Dimon, it’s Rakuten, it’s Fidelity,” says Chu. “All are getting in the space either in building the infrastructure or providing services. That’s going to drive mining share and adoption.”

Facebook recently revealed its long-rumored crypto-project Globalcoin. JPMorgan has announced a JPMCoin for banking and investing. (And once I work out how to blockchain, we’ll be rolling in OneLastCoins.)

“Ten years out from the bitcoin story, and we are starting to see the story become a reality,” Chu told Bloomberg. “What people are really seeing now is that cryptocurrency is not going away.”

According to our very own Nostradamus here, bitcoin is on track for $1 million per coin. But before you go off and spend your life savings on bitcoin, you need to read this first.

Confused? I know I was. (Though I’m always slightly confused.)

On May 4 and 9, North Korea tested several short-range ballistic missiles, bringing an end to a 2017 agreement that they would stop doing that crap.

Bolton said there was “no doubt” that North Korea’s recent launches violated U.N. resolutions. And in return, North Korea put Bolton on blast.

A spokesperson for North Korea said: “Demanding us to ban all launches using ballistic technology regardless of range is same with asking us to relinquish our rights for self-defense.

“Bolton should not be called a security adviser who works to secure security, but an adviser for security destruction who destroys peace and security. (Ed Note: This is genuinely the funniest thing I’ve read all day.)

“It’s not that strange that crooked sound will always come out the mouth of a man who is structurally flawed, and it’s best that this defective human product goes away as soon as possible.” 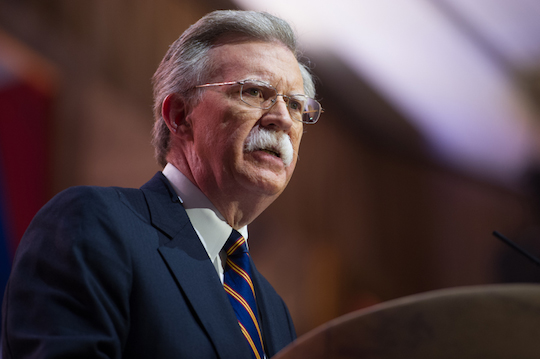 Trump might be looking for a new “advisor for security destruction who destroys peace and security” soon.

President Trump, who was visiting Japan this Memorial Day weekend, disagreed with Bolton’s assessment of the situation and chalked up the missile launches to classic case of North Korea attention seeking.

“My people think it could have been a violation, as you know,” the president said. “I view it differently. I view it as a man, perhaps he wants to get attention, and perhaps not. Who knows? It doesn’t matter.” 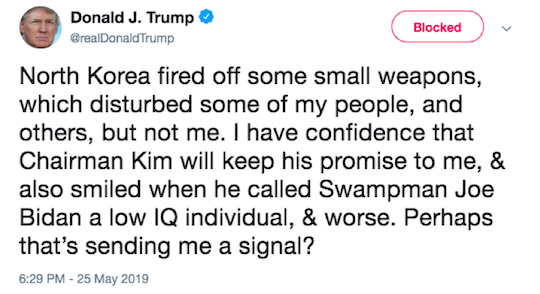 It’s obvious to me what’s going on here. But I want to know what you think.

Is Trump allowing Kim Jong Un to get away too much? Or has he got the whole North Korea situation locked down?

Click here to send us an email and we’ll have the royal rumble in the comments section in tomorrow’s issue.

A judge has banned Anheuser-Busch from implying in its advertising that Miller Lite and Coors Light contain corn syrup. (But saying they contain no flavor is still fine because it’s true.)

The ruling was granted in response to a preliminary injunction filed by MillerCoors (TAP) as part of a lawsuit against Anheuser-Busch (INBEV) over its scandalous anti-Miller ad campaign.

MillerCoors alleges Anheuser-Busch has been intentionally confusing the American consumer with an onslaught of weird ads with wizards and corn syrup. (Some people find fantasy naturally confusing.) 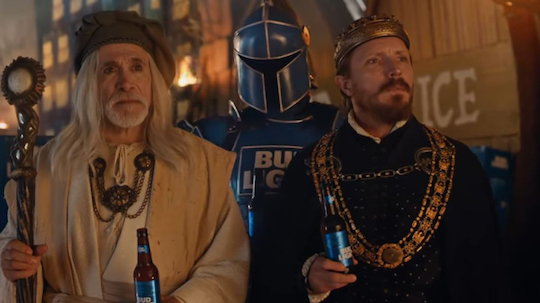 The product placement in the last season of Game of Thrones was out of control.

In its lawsuit, MillerCoors argued the Bud Light ads “deceive beer consumers into believing that there is corn syrup and high-fructose corn syrup in Miller Lite and Coors Light.”

So the company is saying: yes we use corn syrup in the brewing process. But by the time it gets to the consumer it’s all been cooked off.

So it’s not technically true to say their beer has corn syrup in it. (In the same way I ate six burgers this Memorial Day weekend, but it’s no longer fair to say that those burgers are in me.)

Because of this distinction, the judge cleared Anheuser-Busch to run its original ad that played during the Super Bowl, as that ad only implied the company used corn syrup in the brewing process — not that there’s was any corn syrup in the beer itself.

However, there’s been a volley of marketing material since then which has implied that there is corn syrup in its rival’s beer, and that has been put on hold until the lawsuit is resolved.

“We are pleased with today’s ruling that will force Anheuser Busch to change or remove advertisements that were clearly designed to mislead the American public,” the suitably salty CEO of MillerCoors, Gavin Hattersley said in a statement. “As the dominant market leader, Anheuser Busch should be seeking to grow the beer category, not destroy it through deceptive advertising.”

Gav’s probably not wrong. As beers’ share of U.S. alcohol sales drop every year and consumers increasingly move towards small-batch craft beers, the legion of light beers should be united against their true enemy.

Sorry, I read that wrong. That should say “spirits and wines and craft beers.”

Over the last two decades, these products have dramatically increased their share in the U.S. alcohol market.

Is now really the time to be throwing stones at glass breweries?

The U.S. is having an invisible crisis.

It’s not at the border. Or in the stock market.

It’s in our cities and towns and homes and behind closed doors.

Almost 400,000 of those deaths were due to opioids, including prescription and illicit opioids. And it’s getting worse every year.

Today, opioids kill more people than car crashes. And it’s not limited to heroin users. About 40% of opioid deaths involve prescription drugs, not illicit ones. In 12 states today, there are more active opioid prescriptions than people.

Of course, we now know that the skyrocketing figures were caused by bad actors in the pharmaceutical industry pushing doctors to oversubscribe dangerously addictive opioids to their patients.

These folks are finally having their day in court. But where does that leave America?

In 2015 alone (the most recent available figures), the opioid epidemic cost the U.S. an estimated $504 billion.

But a new study points to a strange drug that can help cure opioid addiction. And the FDA are discussing its legal status this Friday. If all goes according to plan, this drug is going to end up in candy, beer, soda… and potentially save thousands of lives.