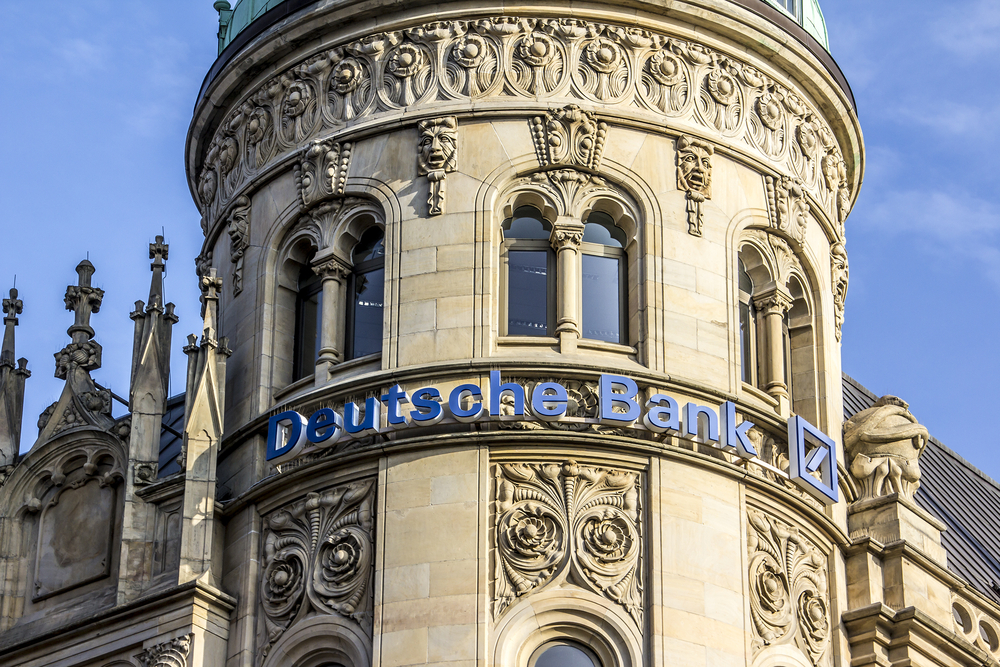 It looks like Deutsche Bank (DB) CEO Christian Sewing has been reading The Life-Changing Magic of Tidying Up (and he’s decided 18,000 Deutsche Bank employees do not “give him joy”).

The global investment bank/hot-bed of financial crime announced this morning it would be scaling down operations in London and New York and giving the axe to a fifth of its workforce, starting today.

Reports are coming in that Deutsche Bank employees in Hong Kong, Sydney, and London are being sent home this morning, complete with the iconic 2008-esque photos of folks leaving work at 9 a.m. with all their stuff in a box. (Not the greatest way to get on international news and a death sentence for your Tinder performance.)

Deutsche Bank’s once-stellar reputation was tarnished by its role in the 2008 financial collapse.

American regulators slapped the bank with billions of fines (USA! USA!). Which, combined with the investment community’s loss of trust, would put an enormous financial strain on the global company.

In a statement to DB staff, CEO Christian Sewing said the drastic cuts were a necessary part of the rebuilding process:

“First let me say this: I am very much aware that in rebuilding our bank, we are making deep cuts.

“I personally greatly regret the impact this will have on some of you. In the long-term interests of our bank, however, we have no choice other than to approach this transformation decisively.” (And I’ve decisively decided that Janice who heats up fish in the work microwave should be the first to transform out of here.)

“We are returning to our roots and to what once made us one of the leading banks in the world.”

Sewing’s plan will scale back investment banking, stop dealing in equities, and create a new “bad bank” to handle its debts. (Though some would argue DB is already a “bad bank.” *Cue air horn noise*)

Yet, while DB’s plan is a major overhaul and a big old statement, financial experts, like Allianz Chief Economic Advisor Mohamed El-Erian, are worried that it’s too little, too late: 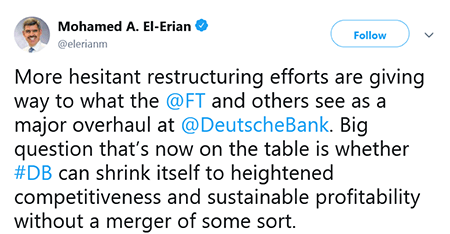 DB will remove a total of 18,000 employees by 2022 (now might be the time to punch up the old resume if you’re a DB employee). But the bank’s not going to see a financial benefit to the action any time soon (if at all).

Severance payments and other expenses will cost Deutsche Bank $8.3 billion, including a $3.3 billion hit this quarter. And as the bank shrinks, so too will its revenue.

Despite Sewing’s effort to reassure investors that this restructuring will make the company more stable and competitive, Deutsche Bank’s stock dropped 5%this morning.

There was one investment that surged on the news. More on that in today’s second story, below.

Breaking: British newspaperswith their fingers on the pulse are reporting that 30 large pizzas were delivered to Deutsche Bank’s London office at lunchtime today. As we go to print, we have yet to discover what toppings are on those pizzas. More as this story develops. 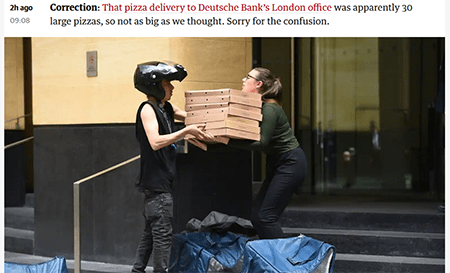 The Guardian originally reported that there were more than 30 pizzas but has since redacted that claim. Journalistic integrity is alive and well!

Meanwhile, bitcoin was launched upwards by the news of Deutsche Bank’s restructuring, jumping $500 in just 15 minutes this morning.

According to Morgan Creek Digital Assets co-founder Anthony Pompliano the news of DB’s colossal downsizing is a ringing endorsement for bitcoin:

“Deutsche Bank plans to fire almost 20,000 employees,”said Pompliano in a tweet this morning. “Bitcoin has no employees to fire. DB is built for the old world. And Bitcoin is built for the new world.” (A new world where I constantly have to explain bitcoin to every one of my oldest living relatives).

VanEck digital asset strategist and MVIS director Gabor Gurbacs says this event illustrates one of the major advantages crypto holds over traditional finance. (It’s also in a tweet because 2019 is hell and this is how news happens now.) 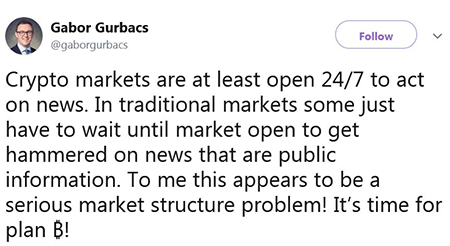 “Plan ₿” is when you ruin a date by talking about bitcoin the whole time.

Bitcoin is on pace to blow past the crucial 12k ceiling this week. But according to our crypto expert and low-key crypto millionaire James Altucher, that will be nothing to what we could see before the end of the month.

With one single move,” says James. “Amazon will shock the world and create an opportunity for anyone to turn $100 into a retirement fortune in the next 12 months.”

James was called a “fake news guy” and a “con artist” when he made this prediction.

But just days later, shocking news about Amazon broke — a “smoking gun” that essentially confirms this could happen as early as July 26th.

Click here to see his shocking prediction and find out how anyone could turn $100 into a retirement fortune in the next year.

Billionaire philanthropist and registered sex homunculus Jeffrey Epstein was arrested this weekend and charged with trafficking and exploiting dozens of minors for sex.

(And it only took about 20 goddamn years. Great job, the system.)

Epstein’s sexual “inclinations” and weird sex parties with minors have been well documented throughout the years.

He was even prosecuted for purchasing sex from a minor in Miami in 2008. But because there are a different set of rules for billionaires, Epstein spent only 13 months in prison. And most of the time he wasn’t actually in a prison.

Then-state attorney (and current asshole) Secretary of Labor Alex Acosta cut the deal of a century with Epstein, allowing him to leave the prison and go to work as a billionaire investor six days a week. (Because we shouldn’t let some light pedophilia get in the way of holding down a day job.)

Epstein plead guilty to two counts of prostitution in 2008. But according to Joseph Recarey, the lead Palm Beach detective on the case, Epstein was operating a “sexual pyramid scheme,” which included upwards of 80 girls.

Acosta’s plea deal included immunity from federal prosecution. That was until April of this year when a federal judge ruled that the plea deal was illegal. And so, here we are, at long last.

The exact details of the case are still unknown. But after federal prosecutors unsealed Epstein’s indictment today, we now know:

According to the indictment, Epstein sexually assaulted girls during “massages.” After which he paid them for their silence and asked them to recruit other girls for sex.

“In this way, Epstein created a vast network of underage victims for him to sexually exploit in locations including New York and Palm Beach,”the indictment said.

So if you thought this was somehow not going to turn into a huge media circus, you’re going to be sorely disappointed.

The later seasons of The Office took a weird turn…

George Gilder: “I’m a Conservative but…”

As a reader of One Last Thing, you know we’ve been following the trade war and its effects closely.

So close, in fact, it’s hard to see the forest for the trees. So today I want to take a step back and pluck the pine needles out of my eyebrows.

I reached out to George Gilder, America’s No. 1 futurist, to get his perspective on the trade war and the blacklisting of Chinese communication company Huawei.

“[Huawei] has recently been condemned by the US government as an instrument of the Chinese communist party and military,”says George.

“Yes, Trump has eased the ban he previously placed on the company. Yet Huawei still poses a conundrum for Americans and advocates of enterprise.

“As an American conservative, I generally support my government. At the same time, however, I believe that the Trade War with China represents a severe misstep — one that will cause irreversible damage.

“Not just for US technology corporations and investors, but for the entire nation.”

George argues that China’s momentum as an economic and technological powerhouse is unstoppable. He points out that the Chinese economy is roughly 20 times bigger than it was in the early 1970s.

And today, while the number of companies in public markets has dropped some 50% in the United States, the number of public companies in China has exploded. China now has some three times as many initial public offerings (IPOs) as the U.S. and roughly equal levels of venture capital.

“Ultimately, banishing US companies from China means excluding them from the world’s largest and fastest growing capitalist market,” says George.“By complying with this crippling policy, US investors do not support their country; they hurt it.

“China’s ascendancy is a fact of the world that we should accommodate with our businesses and — without adversarial rhetoric — recognize in our military budgets and policies.

“Now, some Americans will avoid investing in China no matter what.

“This is a mistake.

“Again, I understand the conundrum. But when I compare what I see in China to what I’m witnessing in the United States, I believe we could learn something from their momentum.”

Will all that said, George tells me that there are several investment opportunities in the U.S.

In fact, he just revealed his favorite stock pick of 2019 to One Last Thingmembers who joined his new research service George Gilder’s Moonshots last week.

It’s not too late to join them and find out George’s favorite stock picks for 2019. Click here now.