Three weeks ago, 15 Saudi agents ambushed and killed Jamal Khashoggi on a visit to the Saudi Arabian consulate in Turkey.

Khashoggi, a journalist for the Washington Post and outspoken critic of the Saudi royal family, was lured to the consulate with the promise of documents he needed for his upcoming marriage.

What followed was a grisly tale of amateur espionage, arrogance and blatant stupidity.

The agents stripped Khashoggi naked, so they wouldn’t get blood on his clothes.

They severed his fingers with a bone saw they brought on the plane from Saudi Arabia.

They cut off his head, dismembered the body, and rolled the pieces up one of the consulate’s extravagant carpets.

Meanwhile, one of the Saudi agents, this morning identified as Mustafa al-Madani, put on Khashoggi’s clothes and took a stroll around Istanbul’s glamorous shopping district for 12 hours. 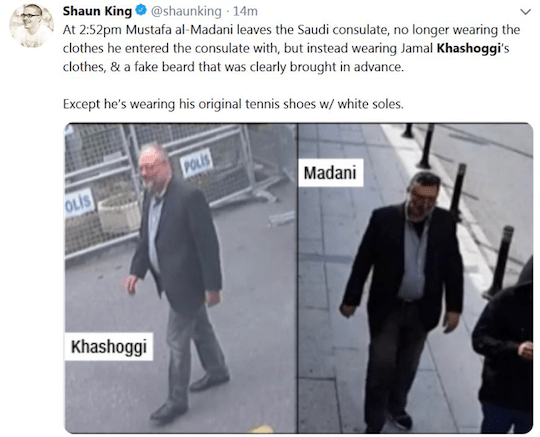 The Saudis probably thought their plan was fullproof. Citizens would see the body double strolling around Istanbul, confirming their story that he must have disappeared after the visit to the consulate. But much like every other aspect of this case, these James Bond wannabes totally half-assed the idea.

The paunchy Madani cuts a similar profile to Khasoggi. But he’s got a full head of hair (and a bad fake beard).

As if that wasn’t blatant enough, Madani wore his own sneakers instead of Khassoggi’s black dress shoes. (Who could blame him? If you’re going to be wandering aimlessly around Istanbul for 12 hours, you’d probably want the arch support.)

At this point, the question isn’t “if” Khashoggi was killed by the Saudi’s. It’s what is going to be done about it. I sat down with economic expert Jim Rickards to discuss the potential financial fallout caused by this bungled political killing.

P.S. Saudi Arabia’s prosperity is built on the ample oil reservoir deep beneath the country.

This could save the coal industry… and net early investors astronomical gains. CLICK HERE to get the full story.

The Rebirth of the Saudi Oil War

By now, you’ve heard the news about the presumed death of Saudi dissident journalist Jamal Khashoggi at the hands of Saudi authorities.

Khashoggi was a U.S. resident who wrote for The Washington Post. And President Trump has warned of “severe punishment” if in fact he was killed by the Saudis.

This could include economic sanctions and possibly the suspension of arms sales (although Trump has said he’d prefer to keep the arms sales in place due to their impact on U.S. jobs).

The general manager of the Saudi-owned news channel Al Arabiya responded with an Op-Ed warning about the consequences of any sanctions.

Here’s part of it:

If U.S. sanctions are imposed on Saudi Arabia, we will be facing an economic disaster that would rock the entire world… If the price of oil reaching $80 angered President Trump, no one should rule out the price jumping to $100, or $200, or even double that figure.

Hyperbole aside, this was not an official Saudi release, but you can bet that he wasn’t speaking off the cuff.

The Saudis are basically threatening to resurrect the old oil weapon they first used in 1973 in response to U.S. support of Israel in the Yom Kippur War. The Saudis cut off oil shipments to the U.S. and domestic gas prices skyrocketed. If you’re old enough, you remember the gas lines.

This time they could slash production, which would raise prices.

Today oil trades around $70 per barrel. Despite all the happy talk out of the mainstream financial media, the U.S. economy isn’t nearly as strong as official numbers suggest.

It can’t handle the added burden of substantially higher energy costs. $100 oil would likely mean recession, to say nothing of $200, much less $400 oil.

But is the Saudi oil weapon a viable option?

A lot has changed since 1973. The U.S. fracking industry is now a major force in global oil production. But fracking is expensive and only makes economic sense if oil prices are high enough to justify the expense.

Oil prices peaked at $115 in June 2014. The fracking industry assumed oil would remain in a range of $70–130 per barrel. Over $5 trillion was spent on exploration and development.

This led to a flood of new oil, which reduced the market share of OPEC producers. Saudi Arabia was losing ground both to OPEC competitors and the frackers.

How did the Saudis respond to the U.S. fracking revolution?

In mid-2014, Saudi Arabia developed a plan to destroy the U.S. fracking industry and regain its lost market share. The exact details of the plan have never been acknowledged publicly but were revealed to me privately by a trusted source operating at the pinnacle of the global energy industry.

Saudi can make money on oil production at prices as low as $10 per barrel. That doesn’t mean the Saudis want a $10 per barrel price. It just means they have enormous flexibility when it comes to setting the price wherever they want.

So the Saudis calculated a price at which frackers would be destroyed. But they also needed to ensure that prices didn’t drop low enough to jeopardize their own ability to finance ambitious internal development budgets, social spending or simple corruption.

What was the optimal price to accomplish both goals?

It turned out that the optimal solution for the Saudi problem was $60 per barrel. A price in the range of $50–60 per barrel would suit the Saudis just fine. That was a price range that would eliminate frackers over time but would not unduly strain Saudi finances.

The Saudi plan was effective and oil prices crashed in 2014. They fell all the way to the mid-$20s in early 2016, which put a lot of frackers out of business.

But the fracking industry did not simply disappear. In fact, the initial response of the frackers was to pump more oil. This additional output plus overshooting accounts for that crash in oil prices to the mid-$20s per barrel level in early 2016.

But prices have come back and today oil is trading over $70, above the Saudi target.

It’s possible that determined Saudi production cuts could send it back to $100. But the high prices would likely be temporary.

That’s because $100 oil would also make fracking that much more profitable, so domestic U.S. exploration and production would likely surge in response, albeit with a lag — the oil wouldn’t come out of the ground overnight. But the new production would bring prices back down.

Point being the Saudi oil weapon is not nearly as powerful as it once was. The U.S. fracking industry has taken it away, so Saudi options are limited.

But that doesn’t mean Saudi Arabia cannot retaliate against any possible U.S. sanctions. More on that tomorrow.

Editor’s note: We typically recommend gold as a hedge against inflation and financial crisis. But at a lab in Kentucky, a federally funded research project scientists have discovered a new byproduct of coal that’s more valuable than gold, pound for pound.

And if you beat the general public into this, you could really win big. Click here to find out how.

Be aware: to get in before latecomers pile onto the bandwagon, you need to act before the end of day tomorrow, Oct. 23. This is when we think this info will go public.