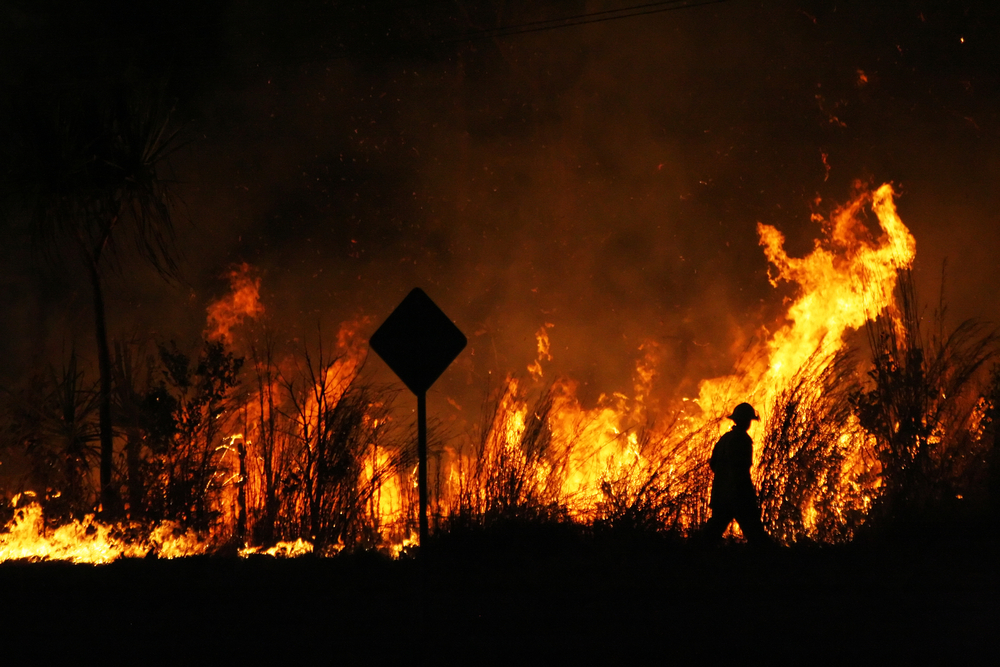 A Fundamental Reshaping of Finance

Visa announced last night it will get with the times, daddio, and buy fintech startup Plaid for $5.3 billion.

Visa is currently the largest U.S. card network, handling trillions of dollars of credit, debit, and prepaid-card transactions every year.

But as services like Google Pay and Venmo push customers more and more towards digital, cardless transactions, major institutions like Visa and Mastercard are worried they going get left behind like the toys in every Toy Story movie. (Seriously, Andy, get it together.)

And that’s where Plaid comes in.

Like the old saying goes: “If you can’t beat them, buy them, become them, have consensual sex with their wife.”

You’ve probably never heard of Plaid. But just like the guy who cleans up your puke when you leave Kelly’s Traditional Irish Wing House, there’s a good chance you’ve unknowingly used their services.

You see, Plaid’s software is the “plumbing” that connects fintech companies like Venmo to your bank account. And like plumbing, even though you see never actually see it, it’s absolutely essential to the transaction.

Despite most folks not knowing their name, Plaid is definitely one of the bigger names in this business.

The Silicon Valley startup counts some major fintech companies among its customers, including Venmo, investing app Robinhood, crypto exchanges Coinbase and Gemini, and probably you.

As of December, Plaid says one-in-four Americans with bank accounts are connected to the company (mostly without their knowledge).

Now, obviously, Visa would probably prefer if everyone just kept using its cards and it didn’t have to buy some hipster little startup (the Kombucha costs alone are scandalous).

But with a company like Plaid tucked under its arm, Visa has little more business diversity and some protection against its absolute worst nightmare: a world where noncard-payments completely replace card payments.

Visa Chief Executive Al Kelly said as much on an investor conference call yesterday, referring to the deal as part of a “long-term” plan to position Visa for the next terrible, soul-crushing decade.

“This fits well, strategically,” said Kelly. “We’re excited about new businesses and the ability for this to accelerate our revenue growth over time.”

The price tag of $5.3 billion is significantly higher than the $2.65-billion valuation Plaid received during a 2018 round of funding, which included investments from Visa and Mastercard. Plaid has grown substantially since then but $5.3-billion still seems like a bit much.

Visa’s price per share (V) closed with a 0.81% gain after the announcement, as investors shrugged and said: “that’s kinda neat, I guess.”

“We are thrilled to have these experienced leaders join our team as we continue to disrupt the global pharmaceutical, alcohol, CPG and functional food and beverage industries,” said Brendan Kennedy, Tilray CEO and man with a terminal case of sad eyes.

“Jon and Michael come to Tilray with extensive expertise in their respective fields and we look forward to their contributions as we pioneer the future of cannabis and hemp around the world. As CFO, Mark has led the company through its IPO and substantial growth in the past couple years and we thank him as he transitions to a new strategic role with the company.”

Investors, who have soured on Tilray’s senior management since the company’s rollercoaster 2018 IPO, welcomed the news that anybody other than the idiots already in charge would be taking on leadership roles in the flagging sticky icky company.

Tilray’s stock surged more than 11% after the announcement before paring off some of those gains and settling near an 8.5% rise for the morning.

Last year, after debuting on the public market at $17, Tilray’s stock (TLRY) blasted off, peaking at $300/share less than two months later. Since then, a series of questionable decisions (that make me wonder if the senior management has been involved with testing their own product) has dragged Tilray’s stock right back down to where it’s started.

Tilray’s management made the bizarre decision to pull back on investing in the Canadian market and has spectacularly failed to increase production to meet the booming demand for legal chronic.

The company was forced to depend on other growers (like this one) to meet its own supply, devastating its gross margin. After today’s gain, Tilray, once a shining beacon of the marijuana industry, will be sitting at a little under $19.

There have been some spectacular missteps by the fledgling weed execs during these blossoming years of legalization. But not everyone has missed the boat on the booming demand for legal weed.

One tiny 50-cent marijuana company built an experimental greenhouse just 25-miles outside Cleveland, Ohio. Listed at over 1.4 million square feet, this facility could pump out nearly 220,000 pounds of marijuana every single year.

To put that into perspective, by our most recent count, the entire Canadian market right now only produces about 132,000 pounds of dank grungus a year.

In other words, this one greenhouse (just 25 miles from where KISS was inducted into the Rock & Roll Hall of Fame) could out-produce Canada’s entire marijuana market by over 100% all by itself. This is why my analysts are calling this The Only Marijuana Stock You’ll Ever Need.

In his annual letter to CEOs, the head of the largest investment management company in the world said climate change will drive “a significant reallocation of capital” and it’s going to happen sooner than you think.

“Climate change is almost invariably the top issue that clients around the world raise with BlackRock,” writes Fink.

“From Europe to Australia, South America to China, Florida to Oregon, investors are asking how they should modify their portfolios.

And because capital markets pull future risk forward, Fink says we will see changes in capital allocation more quickly than we see changes to the climate itself (unless you live in Australia).

Fink says he’s seen a lot of funky stuff in his time. But even the worst, longest-lasting crises eventually came to an end. But climate change is different.

“Even if only a fraction of the projected impacts [of climate change] is realized, this is a much more structural, long-term crisis,” says Fink. “Companies, investors, and governments must prepare for a significant reallocation of capital.” 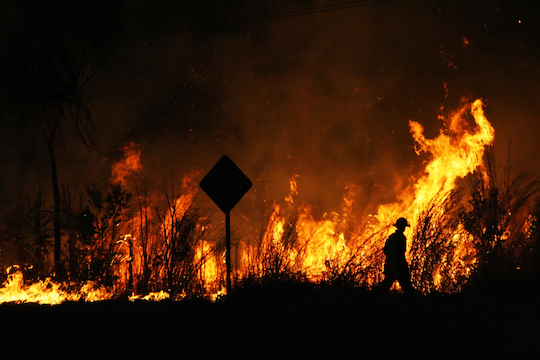 I, for one, welcome our new fiery overlords and would like to remind The Fire that, as a trusted media personality, I could be helpful in rounding up others for kindling.

Yesterday, our macroeconomic expert Graham Summers made an astonishing claim: Central banks are directly intervening in the stock market.

Graham’s not talking about manipulating the markets indirectly by cutting interest rates to make money cheaper, nor does he mean quantitative easing (QE) programs.

Graham says central banks are literally buying stocks outright – hundreds of billions of dollars’ worth of interventions being made every year.

If true, this is some pretty mind-blowing stuff. So I asked Graham to come down and tell us all about it in a guest series for One Last Thing.

Tell Me the Fed Isn’t Manipulating the Market

Consider that the Swiss National Bank literally prints money and buys stocks in the U.S. stock markets. (You can see a recent SEC filing from November 2019 in which it lists the companies it owns here.)

The Bank of Japan also prints money and buys stocks outright. As of March 2019, it owned 80% of Japan’s ETFs. Yes, 80%. And it is a top-10 shareholder in over 50% of the companies that trade on the Japanese stock market.

These are not small positions, either. Between the Swiss National Bank and the Bank of Japan alone, we’re talking about over $300 BILLION in stock positions.

If you think that’s crazy, buckle up.

Because based on the market action I’ve been monitoring over the last few years, I believe the U.S. Federal Reserve is doing this as well. And not just here and there – but on a weekly basis.

For years now, I’ve noted that anytime stocks began to break down, “someone” has suddenly intervened to stop the market from cratering.

That someone is the Fed.

Take a look at last Tuesday’s market action to see what I’m talking about. 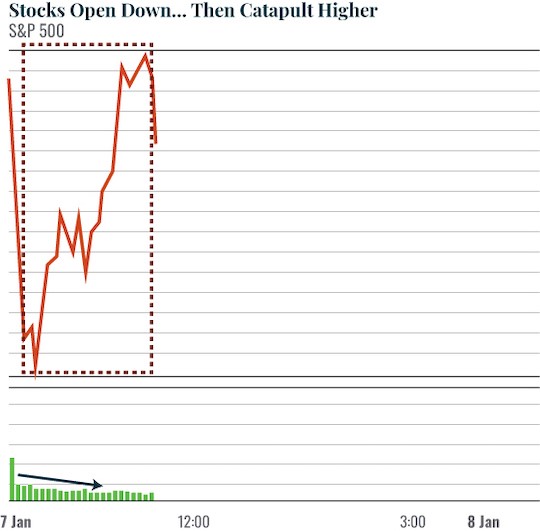 Stocks opened in a sea of red based on increased tensions between the U.S. and Iran. Then, suddenly, stocks went absolutely vertical around 10AM.

How do we know it’s a Fed intervention and not real buyers moving stocks higher?

Let’s break down each of these indicators now.

First and foremost, large financial institutions don’t place buy orders that move the markets. Rather when they go to buy stocks, they have their orders spread out in blocks to ensure the market DOESN’T move and price gets away from them.

Compare that to what happened in the chart above at 10AM. Stocks went absolutely vertical! Whoever placed the buy order that triggered this, wanted the market to rip higher.

Which brings me to the second point…

I’ve noticed time and again that these kinds of large indiscriminate moves occur at 10AM on days when the market opens in the red. This again points to an intervention.

Real investors don’t arbitrarily place large orders at particular times of the day. Rather they look to enter a trade based on where the market is trading, not when.

Add it all up and you’ve got a clear intervention being made in the market – by a large indiscriminate buyer of stocks who wants to ramp the markets higher on days when stocks are in danger of breaking down.

Who else could this be but the Fed?

Alright. We now know the Fed is involved in manipulating the stock market on a near daily basis.

Tomorrow I’ll dive in even further – revealing the four stocks that the Fed focuses on MOST.

As you’ll soon see, there’s a way to use this knowledge to your advantage to lock in regular and massive profits.