“A Body Blow to the Economy”

On Wednesday, the Fed hiked rates by another 0.25%… and the markets responded in kind.

The boards went red. Stocks plummeted. And we are now officially in the worst December for stocks since 1931…

And the month isn’t even over yet.

This is the fourth rate hike this year, and the ninth since the Fed began raising rates three years ago. But financial expert Jim Rickards says the reality of this hike is a lot worse than it may appear on the surface.

This hike is nothing less than a “body blow to the economy” and could very well be the straw that breaks the camel’s back.

P.S. Jim was one of the few folks who predicted Trump’s win, Brexit, AND the 2008 financial crisis. To find out how he does it, grab a free copy of his new book The Road to Ruin: The Global Elites’ Secret Plan for the Next Financial Crisis. In it, Jim reveals the powerful strategies you can use to protect your money and your family from the next crisis. Claim your FREE copy now.

One Step Closer to Crisis

The Fed raised rates another quarter-point on Wednesday, just as I predicted it would.

Markets tumbled as soon as the news broke and the selling accelerated during Jerome Powell’s post-announcement press briefing. His statements weren’t nearly as dovish as markets were hoping for.

“Policy at this point does not need to be accommodative,” said Powell today. “It can move to neutral.”

The markets took the correction as dovish, but in fact, it was just part of the education of Jay Powell. It would be confusing and a bit reckless for Powell to change tack again and suggest the Fed was back on autopilot with regard to rate hikes.

But the Fed is just sticking to the playbook. The basic Fed model set up by Janet Yellen and continued by Powell was that the Fed would raise rates four times per year (March, June, September, and December), by 0.25% each time, until the fed funds target rate hit 3.75%, at which point the Fed would step back and evaluate the situation.

But despite what they say, the rate hikes had nothing to do with “data” and everything to do with having dry powder for the next recession. The only exception to this clockwork program would be an occasional “pause” if the Fed saw strong disinflation, disorderly market declines or job losses.

We’ve certainly had a substantial market decline since October. But obviously, Powell doesn’t consider it on the scale to warrant a pause. It seems clear now that the Fed no longer considers supporting financial markets a core responsibility.

A Body Blow to the Economy

The Fed calls this approach “gradual” but it’s not. There’s a huge difference between a 0.25% rate hike (that’s the Fed’s tempo per hike) starting at 2% versus starting at 6%. In both cases, the hike is 0.25%, but the impact on bond prices and economic activity is much greater when you start with the lower base.

There are highly technical reasons for this, having to do with concepts called “duration” and “convexity.” We don’t need to dive into those. Suffice it to say, hikes from a lower base are much more impactful. In short, the Fed’s policy today is a body blow to an economy that’s still recovering from the worst recession since the Great Depression.

If this rate hiking were the only major monetary development in the world, that would create a challenging environment for investors in stocks, bonds, gold and real estate — all interest-sensitive in different ways. But it’s not the only major development.

“Powell is madly shoveling the money into the furnace”

Behind the curtain, central banks are either slowing down the printing presses or actually burning money. This marks the end of quantitative easing (QE) for the Bank of Japan and the European Central Bank and the start of quantitative tightening (QT) in the case of the Bank of England and the Fed.

From 2008–2014, U.S. critics of the Fed complained about rampant money printing under the banner of QE. There was even a popular cartoon that showed Ben Bernanke on the outside of a helicopter with one hand on a strut and the other hand throwing money out of the helicopter with a wild-eyed look on his face.

This was a send-up of the infamous “helicopter money” that Bernanke advocated, an idea he nicked from uber-monetarist Milton Friedman.

But instead of Bernanke dangling from a helicopter, picture Jay Powell near a furnace with a shovel and a huge pile of $100 bills. Powell is madly shoveling the money into the furnace, burning it. That’s what reducing the money supply looks like, and that’s what the Fed is doing now.

And Powell’s comments Wednesday only reinforced market fears that it will continue. “I think that the runoff of the balance sheet has been smooth and has served its purpose,” he said at the press conference. “I don’t see us changing that.”

That’s still a $2 trillion money supply reduction from the 2014 high.

Analysts estimate every $600 billion of balance sheet reduction is roughly equivalent to a 1.0% hike in the fed funds rate. So in addition to the 3.5% of rate hikes from 2015–2020, you can add on another 3.0% of implied rate hikes from QT. A total of 6.5% of rate hikes (3.5% nominal and 3.0% from QT) in five years from a zero base is one of the most extreme examples of monetary tightening in the history of the Fed.

It compares to the Volcker tightening from 1979–1981. Volcker intentionally set out to crush inflation even if it meant a recession (there were two recessions from 1980–1982). In contrast, there is no inflation on the horizon today and the economy is probably heading for a recession without any help from Jay Powell.

The global phenomenon is neatly illustrated in the chart below. This chart combines the QE and QT of the Bank of England, Bank of Japan, Fed and European Central Bank using colors to show the individual contributions of each central bank.

The Fed’s first, second, and third round of quantitative easing (2008, 2010, and 2012 respectively) stand out clearly in the three blue spikes. The Bank of England also had three waves of smaller magnitude shown as green waves from 2010–2016. The Bank of Japan started late (in 2011) but has never stopped since, as shown in the red wave. Finally, the gray wave is the European Central Bank. They were also late to the party but made it up in volume. 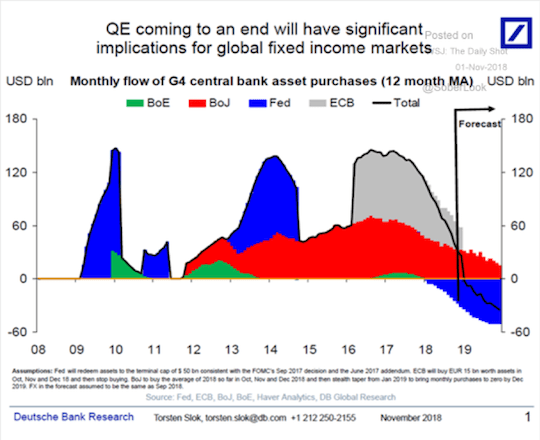 What’s important about this chart is not where we’ve been but where we’re going. The Fed is already in negative territory (the blue wave below the “0” line starting in 2018). The Bank of England is neutral but is also ready to go negative. The European Central Bank and Bank of Japan are still positive but trending down sharply; the European Central Bank will go negative in 2019, according to current plans.

The black trend line shows the aggregate of all four central banks. It crashed in 2018 (mostly because of the Fed) and will go negative globally in 2019. Before long, our cartoon of Jay Powell shoveling cash into a furnace will have to be updated to include Mark Carney, Mario Draghi, and Haruhiko Kuroda.

The trend line points to a return to the 2.2% growth that prevailed from 2009–2017. This is exactly what one would expect from the extreme tightening described above.

Meanwhile, the QT juggernaut is slowing the economy with or without rate hikes. The market can digest all of this along with their Christmas turkeys.

Jim Rickards
for The Daily Reckoning

Editor’s note: For more of Jim’s insights into developing financial crises, check out his new book The Road to Ruin: The Global Elites’ Secret Plan for the Next Financial Crisis.Right now, it’s free to readers of Money & Crisis. Click here to get a hardback copy delivered straight to your home.