Abolish the DEA: 7 Reasons to Get Rid Of It Completely

Yesterday, you’ll recall, we spoke to Mike Margolies about psychedelics, cognitive liberty and the War on Drugs.

Today, we’re going to take it a step further and talk about seven great reasons why the DEA needs abolished. Not reformed. It needs to go.

You wouldn’t try to reform a tumor growing out of your ear. You wouldn’t ask it if it might be interested growing elsewhere. You would cut it out. The same logic applies here. 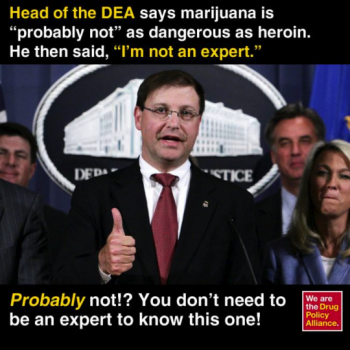 So, we know what you’re wondering. Why abolish America’s finest drug force? Why go through the trouble? Aren’t they the ‘good guys’?

Reason number one, prohibition doesn’t work. And two, the DEA is one of the most destructive and wasteful alphabet agencies in America.

Third reason, the DEA regards its own agents as above the law. DEA agents are given freedom to do the very things they throw people in cages for. Why, who can forget that the DEA failed to fire agents who attended ‘sex parties’ with prostitutes paid for with drug cartel money while on the job in Colombia?

Fourth, the DEA has established a police state against adults who choose to consume plants that the FDA and Big Pharma (sisters in tweed) don’t approve of. But in order to throw people in cages, ruin their lives and sometimes even murder them in the process, you need really good reasons.

Which brings us to the fifth reason the DEA needs to go: It’s basically one big propaganda machine for Big Pharma.

The DEA needs to paint drug users as wily criminals who will stop at nothing to rape, steal and kill to get their next fix. That’s the only way you can justify an army of domestic jackboots stomping on flower beds and shooting dogs all across America.

The problem, of course, with the idea that all people who do drugs are dangerous is that 99% of America is on drugs. We are a drug culture. And, if we’re honest, we prefer it that way. We want to wake up with caffeine (I do, coffee in the morning is one of my favorite parts of the day). And we want to pop our pharmaceutical drugs or supplements because, ideally, they make us feel better. It’s clear, too, that America wants to consume marijuana judging by the rapid pace of legalization and decriminalization. And a small percentage of America, sometimes known as psychonauts, want to take strange drugs to make them feel weird and visit far-off lands without leaving the couch.

But the DEA has a lot of invested (billions per year) into demonizing humans who ingest those substances deemed unfit by Big Pharma’s Zombieplex. And, as a result, the most harmful drugs are granted mass social acceptance. Heroin and methamphetamines, under scientific-sounding pharmaceutical names, are peddled to our kids and grandparents alike. Not because they’re safe. Because, well, follow the money. 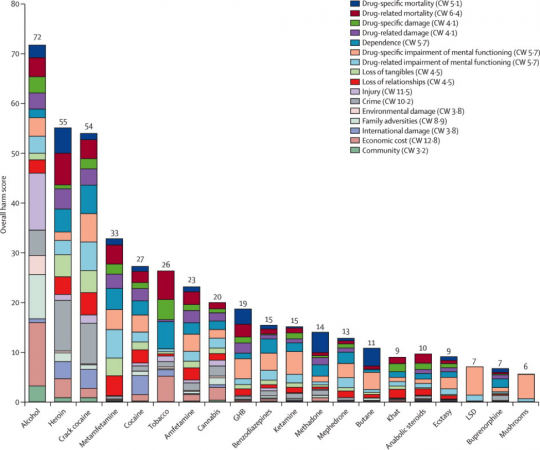 If the DEA actually scheduled drugs based on their safety, curiously enough, LSD and magic mushrooms would be the least illegal and alcohol would be the demon drug, retched up by the devil himself from the gurgling inner bowels of Hell.

The DEA was officially formed in 1972. From ‘72 to 2014, it has burned through over $50 billion in taxpayer funds. Its budget for beating mostly peaceful people up is around $3 billion per year. This $3 billion, mind you, doesn’t include the staggering amount of money and resources the federal, state and local law enforcement set aside to carry out the DEA’s modus operandi. Comrades unite.

And seven, the DEA uses violence to solve non-violent problems.

So how do we abolish the DEA?

Thing is, we don’t have to — and should not — fight the system as it exists. Since it’s rooted in violence, if we fight it, violence is what we’ll receive back. Government is the monopoly on violence. You won’t beat it at its own game. Instead, it’s wise to use what massive brawn often lacks: massive brains.

It’s also time to stop asking for permission. It’s time to create private safe-injection facilities in our communities. It’s time to redefine drug use and drug addiction from the ground up. It’s time to be more conscious and present in the face of it. It’s time to treat individuals with enough dignity and respect to give them the cold hard facts about drugs and let them make up their own minds.

It’s time to end the drug war by making it obsolete. Through compassion and education. And let the guns and jackboots fall by the wayside.

To dig deeper into why the Drug War needs to go, we invite Charles Hugh Smith to the show. He’ll show you why America is so deeply entrenched in the Drug War, and why we need to end it. Now.

It’s difficult to pick the most destructive of America’s many senseless, futile and tragically needless wars, but the “War on Drugs” is near the top of the list.

Prohibition of mind-altering substances has not just failed–it has failed spectacularly, and generated extremely destructive and counterproductive consequences.

What was the result of the Prohibition of alcohol in the 1920s? Prohibition instantly criminalized 40+% of the adult populace and created hugely profitable criminal organizations.

What was the result of the “War on Drugs”? This modern-day Prohibition instantly criminalized large swaths of the adult populace and created hugely profitable criminal organizations.

If you want to increase drug use, criminalize innocent citizens and spawn gargantuan criminal organizations, then by all means declare “war” via Prohibition. The results of Prohibition/War on Drugs are so visibly perverse and so destructive that the entire enterprise is sickeningly Orwellian.

The well-paid apologists for Prohibition/War on Drugs claim that imprisoning millions of people “helps” them avoid drugs. If you think being tossed in prison for a few years “helps” people, then step right up and accept a fiver (5-year sentence) in an American prison, which is essentially a factory that produces one product: people damaged by imprisonment, deprived of their full citizenship, hobbled by a felony conviction–ex-con beneficiaries of years of tutorials by hardened criminals.

This is as Orwellian as the Vietnam War’s famous “It became necessary to destroy the town to save it.”

If you think throwing millions of people in prison “helps” them or society, you are either insane or you’re making a living in the gulag or our sick system of “justice”. If you don’t think America has a “War on Drugs” Gulag, please glance at this chart of Americans in jail and prison–many for drug-related offenses: 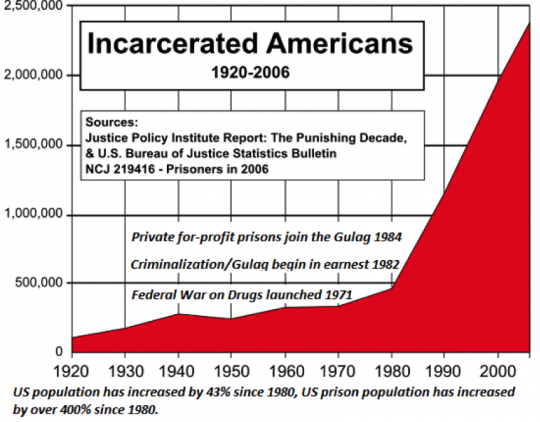 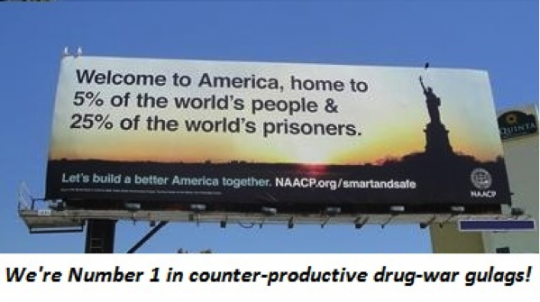 If you know any emergency room physicians and nurses, ask them how many tragic medical situations arise from alcohol abuse and how many arise from marijuana abuse. You’ll hear endless tales of the terrible consequences of alcoholism and drunkenness, and essentially zero accounts of death and mayhem resulting from marijuana use/abuse.

Marijuana, a Schedule 1 drug equivalent to heroin and cocaine according to the Drug Enforcement Agency (DEA), has never been conclusively identified as the sole cause of a single traffic fatality. I researched this a few years ago; feel free to duplicate my research.

And let’s not forget the tens of thousands of annual deaths attributed to that other fully legal addictive substance, tobacco. “Tobacco use is the leading cause of preventable illness and death in the United States.”

The “War on Drugs” policies defining what is “dangerous” and criminalized and what is terribly dangerous yet legal are visibly nonsensical. After decades of tremendous expenditures of taxpayer funds and counterproductive manufacturing of gulags and criminal enterprises, average Americans are finally waking up to the reality that the “War on Drugs” never made sense.

The DEA actually stands for the Destruction Enforcement Agency. The DEA recently denied that marijuana has any potential health benefits, and it remains a Schedule 1 drug equivalent to heroin and cocaine in the DEA’s view.

Denying the potential health benefits of cannabis is like denying gravity–yet we let the DEA deny gravity because, well, the all-powerful and all-pervasive American government loves criminalizing stuff and politicos love pushing harsh penalties for all the stuff the power-hungry state has criminalized.

Mesmerized Americans have watched countless film/TV police and court dramas, and so criminalizing the counterculture, poverty and youth in an unlimited War on Americans (oops, I mean on drugs) seems as natural as, well, throwing millions of nonviolent people in prison on trumped up charges–you know, like those other regimes concerned with “helping” people via harsh prison sentences, the Nazis and the USSR. 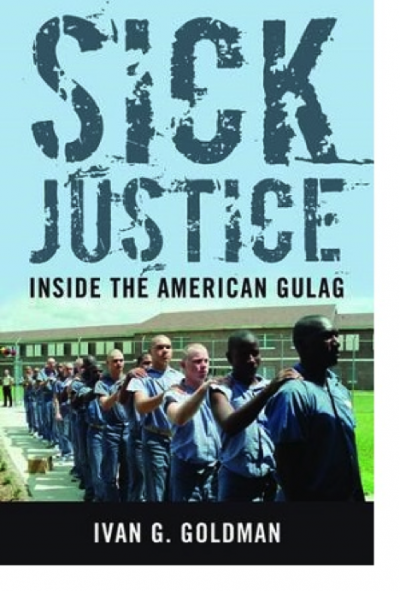 It’s time to stop the madness and abolish the Drug Enforcement Agency (DEA) and America’s “War on Drugs” Gulag. It’s time to expunge the criminal records of everyone who was convicted of nonviolent drug-related crimes (using drugs, dealing nickel bags, growing marijuana, etc.) and restore their full citizenship.

Addiction and drug use are medical/mental health issues, not criminalization/ imprisonment issues. What we need is a national system of community clinics devoted to helping people drawn to using addictive substances with the underlying issues that are driving them to self-medicate with self-destructive, addictive substances.

(People with positive goals, purpose, meaning and relationships have no interest in getting addicted to anything. Burdening themselves with an addiction is the last thing they want for themselves and those they care about.)

It’s time to abolish the DEA, the drug-related criminal justice system and the thriving War on Drugs gulag. Yes, thousands of well-paid bureaucrats, apparatchiks and functionaries will have to seek gainful employment, but perhaps they can find employment in positions that actually help people overcome the medical/mental health issues behind their addictive drives and drug use rather than destroy their lives by throwing them in prisons with violent offenders.