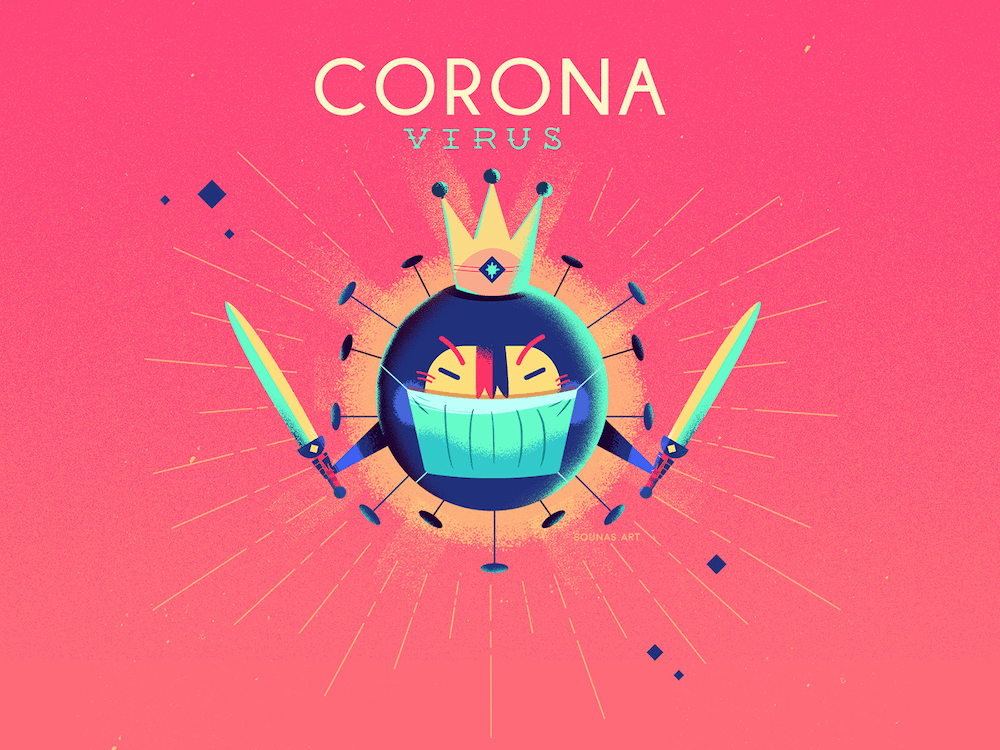 [Ed. note: Today’s episode is part of the upcoming (crowdsourced, with your help) book, The Second Wave Survival Guide… which, of course, all LFT readers will receive a digital copy for free. We need your help! Click here to see the details on the book… and to contribute to the upcoming chapters. Your submissions, if chosen, will be released in these digital leaves next week.] 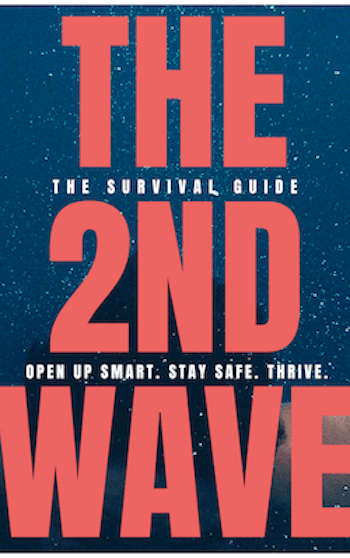 Within the past couple of days, a woman was tased in my home state of Ohio for not wearing a mask outdoors at her son’s football game… and three people in Idaho were arrested for singing gospel music in a church parking lot.

Meanwhile, the COVID-19 survival rates are in, straight from the CDC:

And yet, if you were beginning to think none of this lockdown stuff is justified… consider there’s a new mutant ninja virus that’s going to change everything (again!): D614G.

Just in time for second wave fears, we’re now being told there’s a new Sheriff in town. COVID-19 is mutating into a new strain, known as the D614G mutation. This mutation, some say, is a response by the virus to “defeat masks and social distancing.”

The narrative? This “new” strain is impervious to your silly soapy hands and clothy masks!

Dr. Angela Rasmussen, a virologist at Columbia, however, has a different take: “Mutation is a normal thing that viruses do, but it’s limited to changing how the viral genome or proteins function. It can change the way the virus replicates or interacts with its host. It does not make super viruses that can transcend a mask or be impervious to soap and water.”

The other problem with this narrative? Scientists have been talking about this mutation since January. It’s nothing new, and framing it as such is just more fear mongering.

Now, onto our weekly recap.

If you’ve been keeping up with our “Second Wave” series, some of this will not be new, but it will go deeper into the numbers… how they are being reported in places seeing “outbreaks”… and what countries are reporting their COVID-19 numbers in a sane and scientific manner.

(There aren’t many, but they exist!)

If you’ve skipped ahead, or are just joining us, check out this interview with Dr. Michael Yeadon which sums up our skepticism of a second wave quite nicely.

And if you’re not yet versed on the “false positive” and (as it is now called) “cold positive” problem… this picture below is a breakdown from a formal complaint written to the UK government. 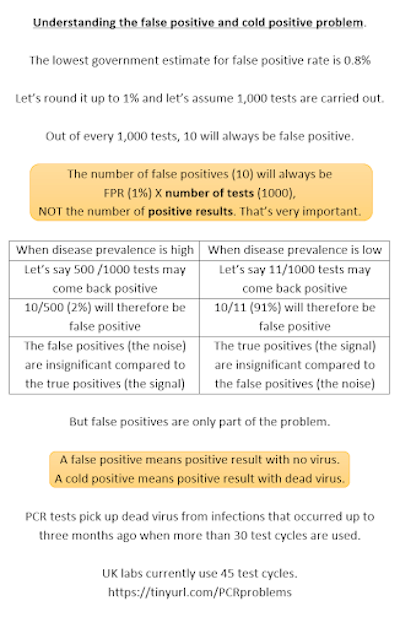 We outlined the problems with the PCR test in detail here. Gist? The higher the “cycles,” the greater the chance for false positives, especially when testing perfectly healthy, “asymptomatic,” people and counting them as “cases.” By the CDC’s own guidelines, anything above 33 cycles is too sensitive to detect “live” and infectious virus. And, also by the CDC’s own guidance (though they’ve backtracked only a bit), asymptomatic people should not be getting tested en masse.

And yet, around the world, when we actually get a modicum of transparency, we see reports like this one below on cycle thresholds in Ontario, where they are now mass-testing anyone who wants one. (Even more, as I’ll show in a moment, they’ve also included to their “case” count those who test positive for antibodies.)

Moreover, keep in mind, most labs are sending the results in as a binary positive/negative, and not reporting the cycle threshold (Ct) value and the viral load. (Perhaps it’s because those numbers would prove wildly inconsistent.) 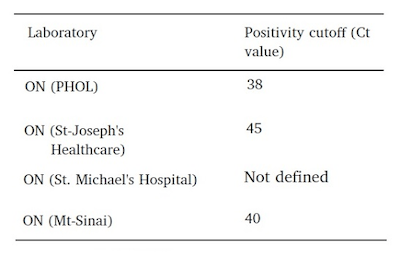 Finally, here’s what the numbers look like lined up. We’ll use the UK as a prime example because, upon writing, fear of the second wave across the pond is on the rise. According to the UK’s own data, the cases are indeed flying through the roof (because, again, of mass testing)… but, as you’ll see below, the hospitalizations and deaths are flat.

We keep hearing that deaths are just around the corner. And they are. But perhaps not for the reason most are being led to believe.

Consider that a death from COVID-19 in the UK means anyone who has died within 28 days of testing positive. Anyone in the hospital (or elsewhere) who dies within the next 28 days, and their test happened to turn up positive, will be counted as a COVID-19 death. “The actual cause of death may not be COVID-19 in all cases,” the website reads. If you were to look at the naked numbers without this important context (which most people are), it would be easy, even prudent, to assume that the cause of death of a listed “COVID-19 death” would be, in fact, “COVID-19”. 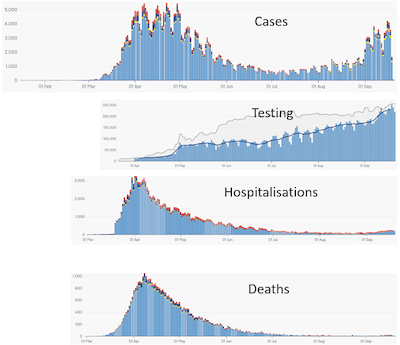 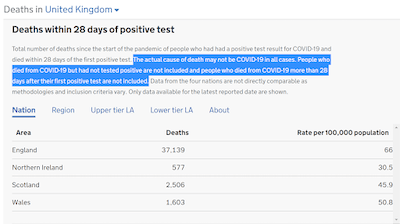 This is the problem in almost every country that’s reporting cases and deaths. There’s often little distinction between those who die from COVID and those who die sometime after testing positive.

This leads to the mistaken idea that COVID-19 is responsible for all of the deaths we see listed in the “COVID-19 deaths.” (For example, news just broke that the youngest “coronavirus death” in Oregon, 26, didn’t actually have COVID.)

And when the numbers aren’t satisfactorily scary enough, public officials can just change what “confirmed case” means… and blammo!… skyrocketing cases. On August 6, for example, Ontarian officials changed the COVID-19 “case” definition to include people with antibodies as “cases.” What did that do to “confirmed cases”? It caused an incredible jump, of course. (See below.) 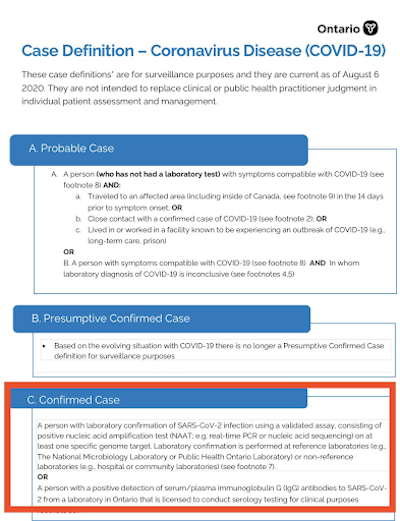 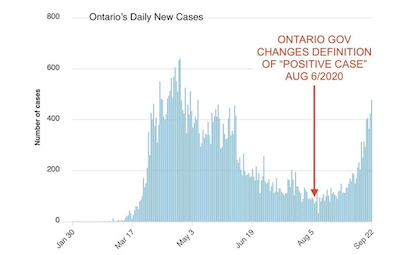 And they’re just getting started.

Starting today in fact, Ontario is expanding testing in up to 60 pharmacies for people who are not showing symptoms. This is on top of the province’s 150 assessment centers already providing testing.

As of September 24, 2020, the Canadian numbers (Ontario and Quebec specifically) are represented in the charts below (source of charts, source of numbers). Notice the number of cases have flown through the roof, while the deaths and hospitalizations have remained stagnant. We must only assume, just like the UK, those deaths are “just around the corner.”

But, again, how are they being counted? 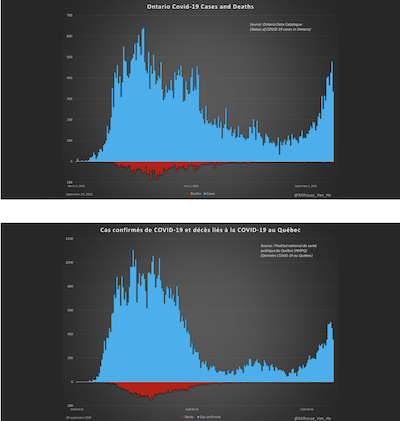 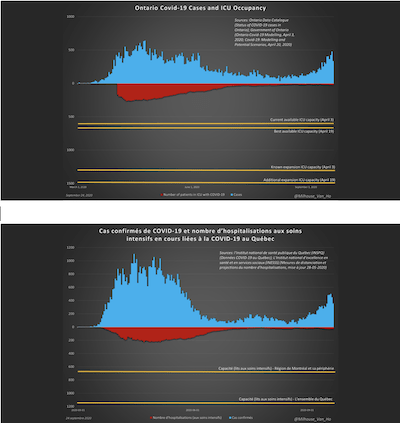 The solution is simple.

Belgium and Sweden have seen only a sliver of cases due to their (much more scientific) testing protocols.

They don’t test asymptomatic people. They address false positives by reducing PCR cycle thresholds to less than 25. They remove positive antibody immunity results from “confirmed case” counts. And they stop using virtually meaningless “cases” as a metric… and instead use ICU admissions and deaths.

Will our data justify a new wave of lockdowns? Could any data that exists justify the lockdowns? We’ll dive into that next week.